Journalists and academics explore the communication of science 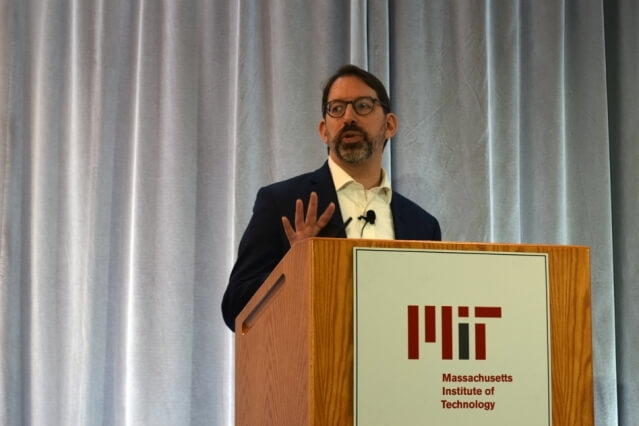 The amount of trust people place in different professions has ebbed and flowed over the years, though in recent years faith in most categories has plummeted, with Congress and the press among the least-trusted groups, surveys have shown. Trust in scientists, by contrast, has remained remarkably steady, at a level that’s comparatively high but still only around 40 percent.

The ways that information about science gets out to the public have changed significantly in recent years, with newsrooms downsizing nationwide, sources of misinformation proliferating, and skepticism growing about what is reported, including about science. To explore ways of building trust in science and communicating accurate information, a daylong symposium at MIT convened journalists working at newspapers, magazines, podcasts and videos; academics who study science communications; and scientists who focus on communicating with the public.

The symposium, titled “Spreading facts: communicating science for a better world,” was co-sponsored by MIT Technology Review, MIT Press, and the Knowledge Futures Group. The Dec. 3 event drew 175 participants at MIT’s Samberg Conference Center despite a snowstorm that had delayed the institute’s opening that day.

In a keynote address, Marcia McNutt, president of the National Academy of Sciences, mentioned that last year the Oxford English Dictionary picked “post-truth” as its word of the year, referring to a time when “feelings and intuition are valued above scientific analysis.”

In part, that reflects an idea that “science may be motivated by concerns that are not those of the public,” she said. “Many members of the public don’t understand the self-correcting nature of science” and don’t adequately distinguish between the results of a single study and a clear scientific consensus built up over time, McNutt said.

She used the analogy of a giant game of Jenga, where a tall tower is built from blocks that are then removed one at a time until the tower topples. Similarly, she said, scientific consensus is built up from many pieces over time, but it’s always subject to review if one of those lower pieces is removed. If a few key studies are withdrawn or found to have been significantly flawed, the tower may crumble, an event known in science as a paradigm shift, when theories undergo fundamental changes.

She said that in communicating science, while scientists are trained to present everything in a neutral and impersonal way, “for the public, the scientists and their stories are important. They want to know that there are real people involved.”

McNutt offered some suggestions on how the public’s trust in science could be improved. First, there should be improvements in the peer review system, including dealing with issues such as predatory journals that don’t carry out the reviews they claim, and peer review rings where people agree to provide each other positive reviews. People should also be recognized for the work they do in carrying out peer reviews.

“We need to clearly signal which papers have earned trust,” she said, proposing a system of badges for papers that have passed certain specific criteria for validation.

When dealing with people who are skeptical of science or of some particular aspect of it, McNutt said it’s important to be clear about terminology. For example, if asked whether she believes in climate change, she answers: “There is an evidentiary basis for climate change.”

“To say you believe puts it in the same realm as religion. You need to distinguish between what has predictive power and what doesn’t,” she said.

In a panel discussion, Mariette DiChristina, dean of the Boston University College of Communication and former editor of Scientific American, noted that “the industry has fairly imploded in the past 10 years,” with an estimated one in four journalism jobs being eliminated. Charles Seife, a professor of journalism at New York University’s Arthur L. Carter Journalism Institute, agreed that “these are hard times for science journalists.” A few years ago, he said, the number of active journalists in comparison to other communications professionals, such as public relations specialists, was 1 to 3. It’s now 1 to 5 or more.

Because of the many new channels of communication available, someone coming right out of journalism school “can build a large audience very quickly, if they have something to say,” Seife said.

A good example of that is recent MIT graduate Dianna Cowern, who has built a large following on YouTube as “Physics Girl,” and who appeared on a separate panel at Tuesday’s event. With more than a million followers, Cowern’s channel has been funded by the PBS network for the last four years, and some of her videos have gone viral. “Going viral is not an easy thing for science videos,” she said, since they have to compete with millions of cute cat videos. One of her most successful videos depicts an experiment to see how high the top ball in a pile of three dropped balls would bounce.

The main thing to strive for to get wide viewership online, she said, is “shareability.” She quipped: “As Einstein said, nothing is worth doing unless you can share it on Facebook.” Novelty, curiosity, and excitement also play a strong part in her short, slightly zany videos.

John Randell, director of science, engineering and technology programs at the American Academy of Arts and Sciences, described research on the public’s trust of leaders in various professions since 1973. The military has tended toward the top tiers of trust, although attitudes toward it have seesawed up and down dramatically over the years. By contrast, trust in scientists has remained very steady at around 40 percent over that whole period, though it has shown a recent small uptick. Trust in the press and in Congress, meanwhile, are now under 10 percent.

But in the same surveys, about 70 percent of respondents say that the benefits of scientific research outweigh its harmful effects, Randell said. And younger Americans have greater trust in science than those in older age groups. There is no type or category of people who can be described as “antiscience,” he said; rather, people have a range of opinions on particular issues.

Several participants described novel approaches to communicating ideas about scientific subjects. In addition to Cowern, there was Grant Sanderson, who described a series of mathematics-based podcasts he produces, and Clifford Johnson, a professor of physics, who described his work developing graphical ways of depicting scientific concepts, which he has created in the form of comic books (or “graphical sequences”). His comics are based on dialogues about ideas, he said, which is “one of the oldest forms of communication.” Galileo’s findings, he pointed out, were written in this form.

Another innovative approach to science communications was described by Beth Daley, editor and general manager of The Conversation US. She explained how that organization provides a way for scientists to communicate their work to the public, by helping them to write articles in a journalistic style, aimed at the general public, which are then distributed for use by newspapers around the country.

This new approach has been quite effective, she said. A staff of about 30 people edits, fact-checks, and works with the scientists, helping them to write a popular piece “in their own voice.” To achieve that, she said, “they often need a lot of help in translating” their work into accessible language. The organization currently publishes about 10 news stories a day.

In closing remarks, Ethan Zuckerman, director of the Media Lab’s Center for Civic Media, pointed out that despite an increasingly polarized society in which people are disagreeing even on the nature of facts, polls showing a relatively steady level of trust in science are encouraging. “I’m optimistic for the next generation,” he said.