By
Graham T. Allison
Back to table of contents
Share

Elected to the Academy in 1970 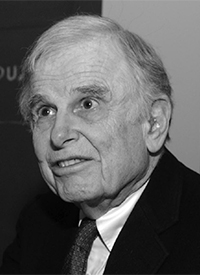 Francis M. Bator, elected to the American Academy of Arts and Sciences in 1970, died on March 15, 2018, at the age of 92. Bator was a professor at Harvard’s John F. Kennedy School of Government and served as Deputy National Security Advisor to President Lyndon Johnson from 1965 to 1967.

Born in 1925 in Budapest, Hungary, at the age of fourteen he fled with his family to New York, where his father became a banker. Bator enrolled in Groton, after which he studied at the Massachusetts Institute of Technology, where he obtained both his Bachelor of Science and Ph.D. degrees in economics. About Bator, McGeorge Bundy observed, “He has the sophistication of the Central European, the good manners of the Grotonian, the intellectual acuteness of the Institute (MIT), and the splendid combination of human qualities for which all residents of Cambridge are noted.”

As Deputy National Security Advisor on International Economic Policy and Europe first under Bundy and then under Walt Rostow, Bator served during President Johnson’s fateful decision to Americanize the war in Vietnam. This experience shaped his understanding of policy-making and the agonizing choices presidents confront. In an insightful lecture initially presented at the American Academy of Arts and Sciences and later expanded into the article “No Good Choices: LBJ and the Vietnam/Great Society Connection,” Bator wrestled with the dilemma President Johnson faced in seeking to pursue his Great Society program at home while escalating the U.S. war in Vietnam abroad.

About this Bator wrote, “The war deprived the Great Society reforms of some executive energy and money. But Johnson believed – and he knew how to count votes – that had he backed away in Vietnam in 1965, there would have been no Great Society to deprive. It would have been stillborn in Congress.” That judgment led to a great debate between Bator and Fred Logevall, the leading historian of America’s involvement in Vietnam. Logevall countered Bator with the argument, “In view of the constellation of forces in Congress and in the press, and Johnson’s own dominant political position, there is little reason to believe that a decision against war would have exacted an exorbitant political price, or cost Johnson the Great Society.”

Bator’s primary responsibility in government centered on Europe. He was called sometimes “Europe’s assistant,” a title he liked. As The Economist wrote when Bator left government, “He has had direct responsibility and direct access to the President, who has relied heavily on him on a wide range of subjects having both a technical and a political aspect: international monetary reform, the Kennedy Round of tariff negotiations, adapting the North Atlantic Treaty Organization to the existence of General de Gaulle, whistling up credits to support sterling, financing the forces in Germany and keeping the nuclear proliferation treaty alive.” In sum, The Economist concluded, “On most of these matters most of the time, a thread of lucidity, consistency and balance has been traceable in the Administration’s handling and Mr. Bator has had a lot to do with it.”

President Johnson’s admiration for Bator was captured in a note that read, “What I did want to say right now is how greatly I value your work, your mind, your independence, and your devotion to your country. I am proud to have you with me in these times.”

Before going to Washington, Bator taught economics at MIT. There he wrote his most famous article, “The Simple Analytics of Welfare Maximization,” which became a pillar in the teaching of microeconomics. His subsequent work, “The Anatomy of Market Failure,” laid the cornerstone for our modern understanding of what markets do and – equally importantly – leave undone. It illustrated cases in which “perfect” markets fail to produce perfect (Pareto-efficient) outcomes. Thus in a perfectly efficient market firms produce “externalities” such as greenhouse gases that destroy a livable environment. His 1960 work, The Question of Government Spending, was identified by The New York Times as one of the seven books that informed John F. Kennedy’s thinking on the presidency. Walter Lippmann’s review of it in The New York Herald Tribune declared, “It is objective, scholarly, and highly analytical, and it will – I think – have a gradual and profound influence on American thinking in these manners.”

Upon returning to Cambridge from Washington, Bator joined what was emerging to become Harvard’s Kennedy School as Chairman of its Public Policy Program. With Richard Neustadt, Thomas Schelling, Howard Raiffa, and a handful of others, he became one of an illustrious group known as the school’s “founding fathers.” MIT professor and Nobel laureate Robert Solow called Bator a “pillar of eclectic American Keynesianism,” who fought to clear a path from academic economics to public policy. He continued teaching at Harvard until his retirement in 1994.

Bator and his wife, the former Micheline Martin, separated in 1972. Besides her and their son, Christopher, he is survived by his daughter Nina Bator Moss, his partner Jae Roosevelt, and four grandchildren.