By
Geraldine L. Richmond
Back to table of contents
Share

Elected to the Academy in 1970 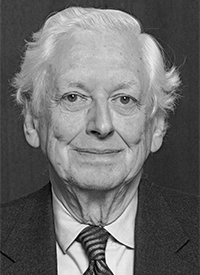 Jerrold Meinwald will long be remembered for his consummate curiosity, his infectious smile, his love of music, and his passion for all things wondrous. With his passing on April 23, 2018, we grieve the loss of this wonderful, kind, and generous man who made our lives much richer in so many ways.

Born in 1927 in New York City to Herman Meinwald and Sophie Baskin Meinwald, he graduated from Stuyvesant High School and attended Brooklyn College and Queens College. After serving in the United States Navy as an electronics technician (1945–1946), Jerry earned a Ph.B. (1947) and B.S. (1948) in Chemistry from the University of Chicago, and an M.A. (1950) and Ph.D. (1952) from Harvard University. While at Harvard he worked with renowned chemist and Nobel laureate R. B. Woodward.

Jerry’s enthusiasm for discovery and chemistry emerged early in his life. With his childhood friend Michael Cava he produced homemade firework shows for neighbors and synthesized dyes in his home laboratory. Yet he was equally passionate about music of all kinds. Jerry played the flute and the recorder and studied with some of the outstanding teachers of the twentieth century. He loved to perform whenever the occasion arose. Often with his wife Charlotte at the piano, he played with (and for) colleagues, friends, and family members. Combining his love of science and music, he performed concerts of chamber music at meetings of the International Society for Chemical Ecology in Urbana, Illinois (2014), Stockholm, Sweden (2015), and Kyoto, Japan (2017).

Cornell University was the main benefactor of his talents in research and teaching from his first faculty appointment in 1952 and throughout most of his career. He trained generations of chemists and published more than four hundred journal articles with some two hundred collaborators. One of his early projects at Cornell was to determine the chemical compound in catnip that causes cats to go crazy when they smell it. This was the beginning of a long career deciphering the intricate chemical strategies that insects use when mating, locating food, protecting offspring, and defending against attackers. He and entomologist Thomas Eisner, a colleague for fifty years, showed that insects and plants interact in countless ways, both synergistically and antagonistically, through chemical signals. That collaboration established a new field of science called “chemical ecology.”

Jerry was elected to the National Academy of Sciences in 1969, to the American Academy of Arts and Sciences in 1970, and to the American Philosophical Society in 1987. He was an Alfred P. Sloan Foundation Fellow (1958–1962) and twice a John Simon Guggenheim Foundation Fellow (1960–1961 and 1976–1977). His many awards include the Tyler Prize in Environmental Achievement (1990), the Heyrovsky Medal of the Academy of Sciences of the Czech Republic (1996), the American Chemical Society’s Roger Adams Award in Organic Chemistry (2005), the Grand Prix de la Fondation de la Maison de la Chimie (2006), the Benjamin Franklin Medal in Chemistry (2013), the Nakanishi Award of the Chemical Society of Japan (2014), the National Medal of Science (2014), and the American Academy’s Distinguished Leadership Award (2016).

Jerry contributed in so many ways to the American Academy. In 1970, he joined a joint committee of the American Academy and National Academy of Sciences to establish an International Centre of Insect Physiology and Ecology (ICIPE) in Nairobi and served as its Research Director from 1970 – 1977. He was a member of the Academy’s Council beginning in 1983. He held leadership roles in many Academy studies and publications, serving on the Academy’s Committee on Publications and Public Relations and on the Academy’s Committee on Studies, culminating in his service as co-chair in 2012 when these committees merged and became the Committee on Studies and Publications. In 2006, he began serving as a Co-Principal Investigator of the Academy’s project on Science in the Liberal Arts Curriculum and co-edited (with John Hildebrand) the project’s final publication, Science and the Educated American: A Core Component of Liberal Education. He also served as a guest editor of two Dædalus issues: “Science in the 21st Century” (with May Berenbaum, Summer 2012) and “From Atoms to the Stars” (with Jeremiah Ostriker, Fall 2014).

Most visible to Academy Members was his role as Secretary, a position he held from 2005 – 2016, which included serving as Chair of the Committee on Membership. For many years, I had the pleasure of working closely with Jerry as I served as Chair of Class I, as Assistant Secretary for the Sciences, and now as Secretary of the Academy. As I follow in Jerry’s footsteps, I know that I have learned much from this wise master in ensuring that the Academy’s election process is fair and reflects the mission and values of our organization. I – along with his many friends, students, and colleagues – will miss Jerry’s gentle nature, the way he listened to all voices, and his wonderful smile that reflected the joy that he had for living. Such memories are as rich and full as the music that he so loved.

Jerry is survived by Charlotte Greenspan, his wife of thirty-seven years; their daughter, Julia; and Constance and Pamela, daughters of his first marriage to Yvonne Chu.