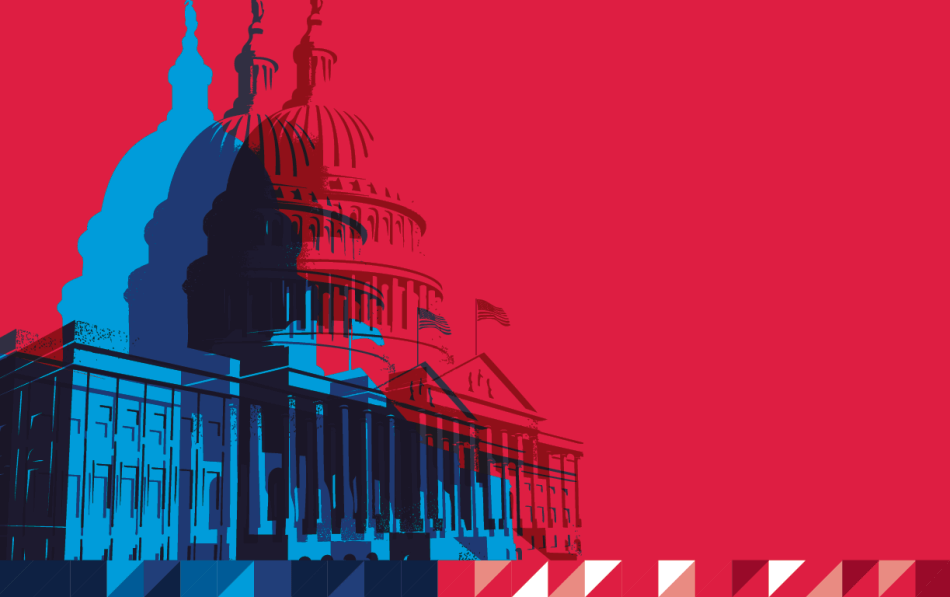 The framers of the U.S. Constitution intended the House of Representatives to be “the People’s House.” More so than any other branch of the federal government, congresspeople are meant to have a close connection with the public they serve. For decades, the House grew as the nation grew, which allowed congressional districts to remain relatively small. Then, in 1929, Congress capped the size of the House at 435 seats. Since then, districts have massively expanded, and the number of constituents represented by each congressperson has exploded from roughly 35,000 in 1790 to over 760,000 today.

In its landmark 2020 report, Our Common Purpose: Reinventing American Democracy for the 21st Century, the Academy’s cross-partisan Commission on the Practice of Democratic Citizenship identified expanding the House of Representatives as an important reform to revitalize American democracy. Doing so, the Commission concluded, “will tighten the link between representatives and their constituencies and make the House more representative of the nation.” The Commission, however, left several key details open, including the precise number of seats that should be added. 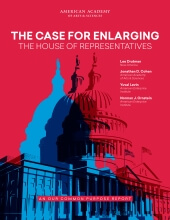 Last year, the Academy convened a working group to pick up where Our Common Purpose left off. That work led to the December 2021 release of The Case for Enlarging the House of Representatives, a report authored by working group members Lee Drutman of New America; Yuval Levin and Norman J. Ornstein of the American Enterprise Institute, both of whom also served on the Democratic Citizenship Commission; and Jonathan D. Cohen, the Joan and Irwin Jacobs Program Officer for American Institutions, Society, and the Public Good at the Academy.

Why It Matters that Congressional Districts are Too Large

The growth of congressional districts over the last ninety years has had serious and harmful consequences. The most pressing is that Americans feel disconnected from their congressional representatives. According to Gallup, as of November 2021, congressional job approval hovered at around 20 percent. It is difficult for voters to make their voice heard when they are just one of 760,000 constituents. Research shows that voters from smaller districts were more likely to feel their congressperson did a good job keeping in touch with the district and they were more likely to approve of their representative. Retirees, veterans, small business owners, and others often require regular assistance from congressional offices, which are already overwhelmed by legislative responsibilities. Expanding the House of Representatives will bring the makeup of this body in line with the founders’ vision by making it more responsive to voters.

District size also impacts who runs for Congress. It is more expensive, on average, to run for office in a large district than a smaller one, which favors incumbents and other well-financed candidates. Adding more seats would create opportunities for a new class of candidates, which may better reflect the nation’s full demographic and ideological diversity.

Additionally, enlarging the House would reduce the overrepresenta­tion of small states in presidential elections. Because every state is guaranteed at least three Electoral College votes, residents of smaller states wield disproportionate power in choosing the president. Enlarging the House would reduce the chance that the winner of the popular vote does not also win the election, thereby helping to restore trust in the Electoral College.

Restoring the framers’ vision will not be easy, but it is feasible. A constitutional amendment is not required – a mere vote of Congress is all that is needed to create a more representative federal government. 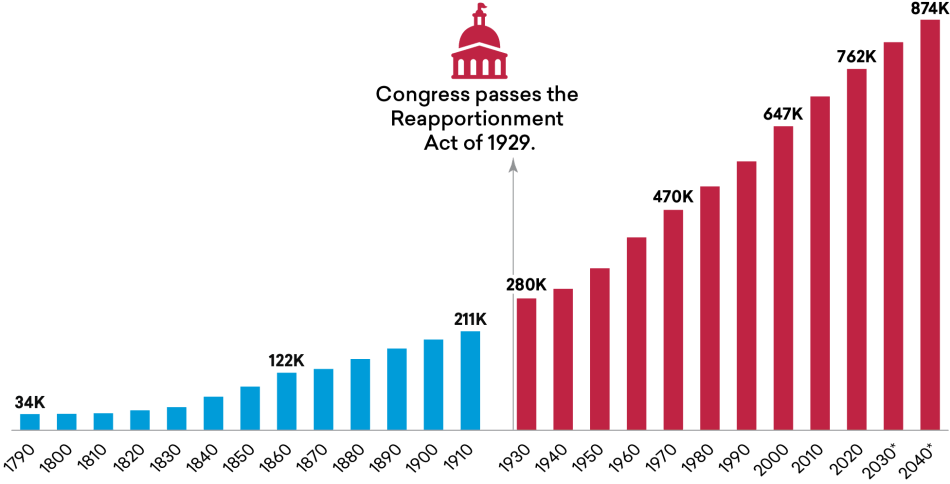 Note: Dates with an asterisk are projected.

How Many Seats Should be Added?

Our Common Purpose preliminarily suggests the addition of at least fifty seats but notes that a “precise number should be established through vigorous discussion and debate.” The Case for Enlarging the House of Representatives proposes adding 150 seats, followed by regular expansion. This new proposal is rooted in the principle that Americans should not regularly lose representation in Congress. Since 1931, 149 seats have been shifted between states, as states regularly lose seats during the decennial reapportionment, even when their population is increasing. Because adding 149 seats would result in a House with an even number of seats (making tie-breaking difficult), the report recommends adding one additional seat, for a total of 585. Going forward, Congress should increase by the number of seats necessary to ensure that states only rarely lose seats, as used to be the norm. The report also describes several other proposals that would entail continuous expansion and would achieve similar benefits.

In today’s polarized political atmosphere, a crucial question, of course, is whether expanding the House would advantage one political party. The authors ran more than 2.6 million simulations of the 2020 election (ten thousand simulations at each of 265 different possible House sizes), and at no size did either party gain more than a 3 percent advantage in their odds of controlling the chamber. The results of presidential elections, too, would be unchanged. The outcome of the last twelve presidential elections would be the same at most feasible House sizes, the only exception being the nearly-too-close-to-call 2000 election. These findings are crucial, as they increase the likelihood that the reform to expand the House will receive bipartisan support. 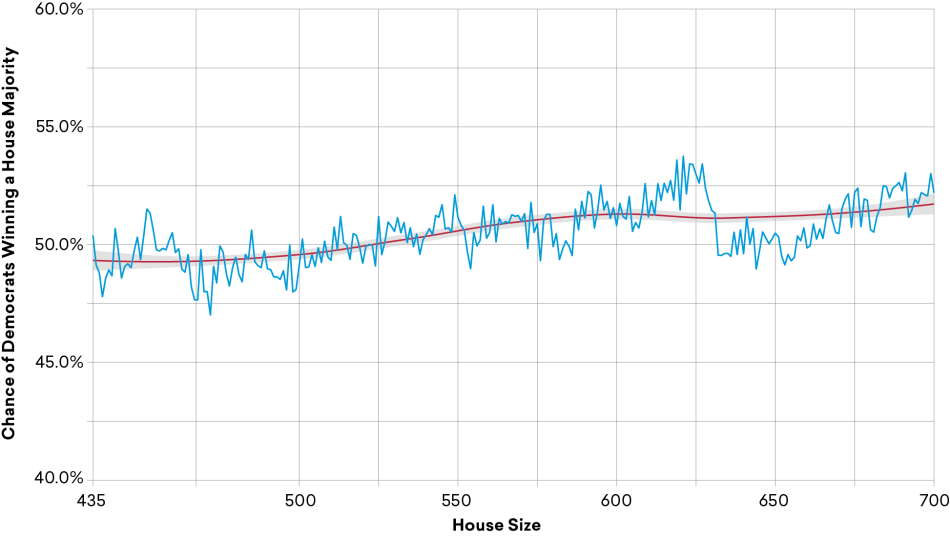 The blue line indicates the projected partisan control of the House. When the blue line is above 50 percent at the House size noted in the x-axis, the model predicts that Democrats have a greater than 50 percent chance of controlling the House. When the blue line is below 50 percent, the model predicts Republican control. The red line is a trend line, offering a picture of the overall average. Source: Author calculations of projected district allocation based on 2020 census data using the Huntington-Hill method; simulations of balance of power based on actual 2020 House election results.

A Commitment to Restore the Framers’ Vision

James Madison wrote in The Federalist, No. 55 that “The number of which the House of Representatives is to consist, forms another and a very interesting point of view. . . . Scarce any article, indeed, in the whole Constitution seems to be rendered more worthy of attention.” Our nation has overlooked this important issue for far too long, and this is one reason why the Academy has committed to make significant progress toward this proposal and the thirty other reforms recommended in Our Common Purpose by 2026, the 250th anniversary of the country’s birth.

The Case for Enlarging the House of Representatives is generating robust discussion. In December 2021, report authors Yuval Levin and Lee Drutman published an op-ed in The Washington Post, and the Academy cohosted a launch event with the American Enterprise Institute (AEI) that aired on C-SPAN and featured Drutman and Levin as well as Kevin Kosar (AEI), Ruth Bloch Rubin (University of Chicago), and Jonah Goldberg (The Dispatch). In early 2022, staff in the Academy’s American Institutions, Society, and the Public Good program area will continue to promote the report, a major step in the Academy’s efforts to bolster American democracy and advance the recommendations in Our Common Purpose.

To read the report, please visit the Academy’s website.