How Are Your Students Doing? New Reports from the Humanities Indicators on the Earnings and Job Outcomes of College Graduates

Earning a bachelor’s degree, in any major, provides a substantial financial advantage over those who do not attain the degree. Recent reports from the Academy’s Humanities Indicators explore the extent of that gain, as well as the occupational outcomes of college graduates, using recent data from the U.S. Census Bureau’s American Community Survey (ACS). 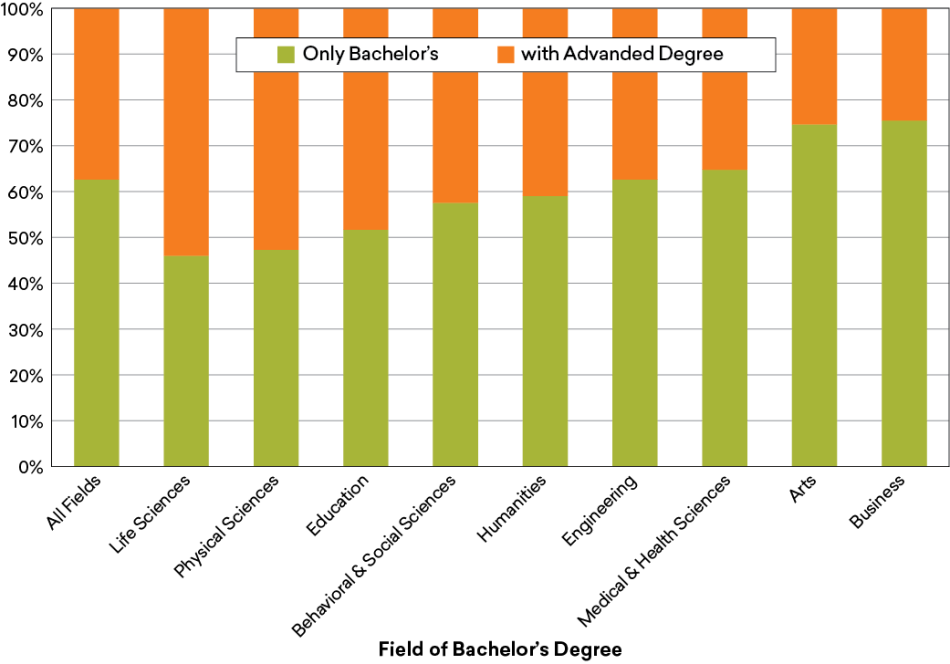 Outcomes with Only a Bachelor’s Degree

Prior to the pandemic (the most recent data are for 2018), almost everyone with a bachelor’s degree who wanted a job had one. Among college graduates without an advanced degree, the unemployment rate was 2.9 percent. Even among graduates from fields that tend to have slightly higher rates of unemployment (such as the arts and the humanities), just 3.6 percent were unemployed. The lowest rates of unemployment (at 2 percent) were associated with fields aligned with specific vocational occupations (such as education and the health and medical sciences).

In comparison, graduates from academic disciplines such as the humanities and the life, physical, and social sciences are more widely dispersed among the occupations. More than 10 percent of graduates from those disciplines were employed in management positions, around a third were working in a variety of sales, service, or other office and administrative jobs, and around 10 percent were employed in positions in K–12 education.

Having a more obvious occupa­tional destination does not guar­-an­tee substantial earnings, however. Among college graduates with only a bachelor’s degree, engineering majors had the highest median earnings ($88,139); education majors had the lowest ($45,589). In comparison, graduates from the liberal arts and sciences fell modestly below the median for all college graduates in this category (almost $63,000). For instance, graduates from the humanities and the life, behavioral, and social sciences had median earnings of between $55,000 and $59,000.

Politicians and the media often compare average earnings among college graduates from various fields, dwelling particularly on the substantial gap in earnings for engineers compared to humanities majors. It is important, however, to keep in mind that earning any college degree provides a substantial financial and employment advantage. Median earnings for workers with only a high school diploma were substantially lower (around $35,000) than those of college graduates from every field. And the unemployment rate for those who completed high school but did not attend college was 5.3 percent.

Outcomes with an Advanced Degree

While earning an undergraduate degree provides a substantial economic improvement, earning an additional degree provides a greater financial advantage. On average, an advanced degree provided a 37 percent boost in median earnings for all college graduates. The largest earnings gains were found among graduates from the sciences. Those with an undergraduate degree in the life sciences had an 80 percent boost in median earnings, while graduates from the physical sciences enjoyed a 49 percent increase. For most of the other fields, the earnings boost, though noticeably less, was still substantial – ranging from around 30 percent for graduates from the arts and engineering to around 35 percent for those in education and the humanities.

The advanced degree could be in any field (details about subsequent degrees are not requested in the ACS), but the occupational differences relative to those with only an undergraduate degree provide some significant clues. For instance, just 13 percent of those with only an undergraduate degree in the life sciences go into health and medical jobs. But among those who earn an advanced degree in the life sciences, the share rises to 47 percent. Similarly, a negligible share of graduates with just a bachelor’s degree in the humanities and the behavioral and social sciences enter occupations related to law, but among those with an advanced degree, more than 12 percent do so.

The Effect of Experience on Earnings

In a separate report, the Indicators examined the effects of experience on the earnings outcomes of college graduates. Since no national survey tracks individuals through their careers, the Indicators used age as a proxy for work experience – comparing the range of earnings for those early in their careers (workers in their twenties and thirties) to the earnings of older college-educated workers (in their late-forties and fifties). While imperfect as a measure of changes at the individual level, the data help identify broad patterns.

For instance, while fields such as the humanities are often faulted for offering a limited path to financial success, the data show that substantial shares of workers with a bachelor’s degree from almost every field have significant earnings later in life (Figure 2). Among older adults with just an undergraduate degree, more than one in four had annual earnings above $100,000 in 2018, attesting to the fact that every field offers a path to financial success (for those who consider that a priority). The notable exception was among education majors, in which only the top quarter of the older graduates earned above $73,000. 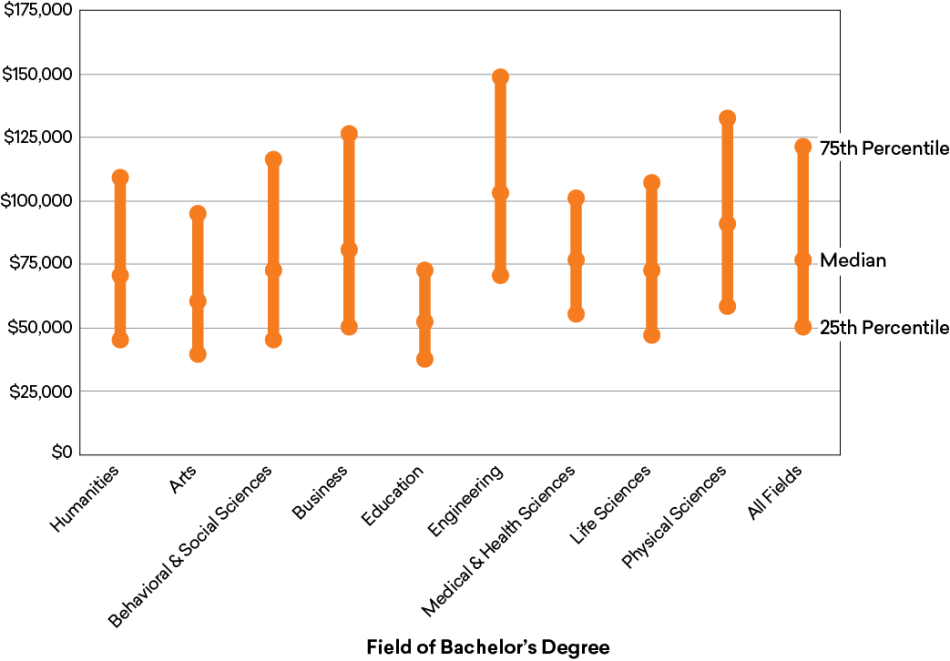 One purpose of the study was to test a popular argument among humanities advocates that the earnings of humanities majors “catch up” to those of graduates from business, engineering, and science programs. Unfortunately, the data do not support that claim. Older humanities graduates earned less than their younger counterparts relative to degree holders in the life and physical sciences, and even though the gaps narrowed relative to engineering and business majors, they still lingered.

The Indicators staff are working on additional studies about the employment outcomes of college graduates, including relative job satisfaction, and the earnings and occupations of graduates with masters and doctoral degrees from various fields (using a separate federal survey of college graduates). Those findings will be released in the fall.

For questions about these reports, suggestions for other lines of inquiry, or general queries about the data, please contact Robert Townsend, codirector of the Humanities Indicators, at rtownsend@amacad.org.