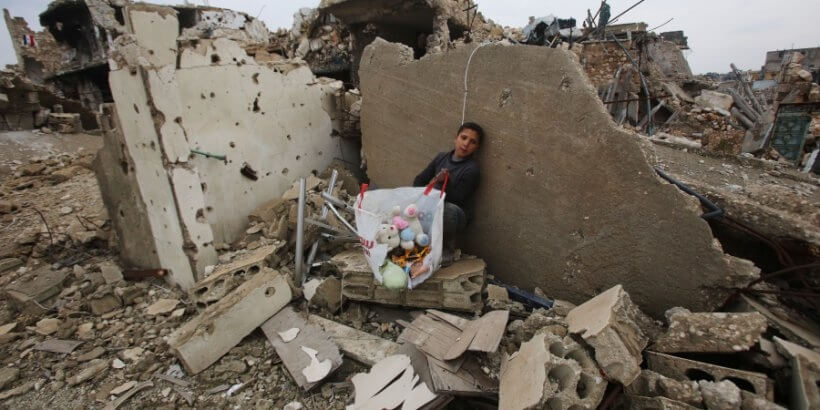 A Syrian boy sits with belongings he collected from the rubble of his house in Aleppo's Al-Arkoub neighbourhood on Dec. 17, 2016, after pro-government forces retook the area from Syrian rebel fighters.

"Most civilian casualties in war are not the result of direct exposure to bombs and bullets; they are due to the destruction of the essentials of daily living, including food, water, shelter, and health care."

So begins the abstract for an essay in the Winter 2017 edition of Daedalus by Stanford Health Policy’s Paul Wise, the Richard E. Behrman Professor of Child Health and Society and professor of pediatrics at the Stanford School of Medicine.

Wise argues in his essay, “The Epidemiologic Challenge to the Conduct of Just War: Confronting Indirect Civilian Casualties of War," that the death of any child is always a tragedy. But the death of a child from preventable causes is particularly unjust.

“This is, of course, as true in peacetime as it is in war,” he writes. “My argument is that the dramatic growth in our ability to prevent death and disability from the indirect effects of war generates not only humanitarian impulses, but also just war demands for the provision of this capability to populations affected by war.”

The American Academy of Arts & Sciences devoted its Fall 2016 and Winter 2017 issues of its journal, Daedalus, to the theory of Just War. It held its 204th annual meeting at Stanford University in November, with Wise reviewing the main points of his essay. Other speakers included Stanford President Marc Tessier-Lavigne and FSI's Scott Sagan and Joe Felter.

(Videos of all their talks can be found on this page. And you can listen to their conversations in this World Class podcast, "Ethics in War," by the Freeman Spogli Institute for International Studies.)

The Epidemiologic Challenge to the Conduct of Just War: Confronting Indirect Civilian Casualties of War