On April 11, 2019, the American Academy of Arts and Sciences presented the Rumford Prize to six scientists for the invention and refinement of optogenetics. The awardees are Ernst Bamberg, Professor and Director of the Department of Biophysical Chemistry at Max-Planck Institute of Biophysics; Edward Boyden, Y. Eva Tan Professor of Neurotechnology, Associate Professor of Biological Engineering and Brain and Cognitive Sciences at MIT’s Media Lab and McGovern Institute for Brain Research, and Co-Director of the MIT Center for Neurobiological Engineering; Peter Hegemann, Professor and Head of the Department for Biophysics at Humboldt University of Berlin; Gero Miesenböck, Waynflete Professor of Physiology and Director of the Center for Neural Circuits and Behavior at the University of Oxford; Georg Nagel, Professor at the University of Wuerzburg (Bavaria); and Karl Deisseroth, D. H. Chen Professor of Bioengineering and of Psychiatry and Behavioral Sciences at Stanford University. Lucia Rothman-Denes, A. J. Carlson Professor of Molecular Genetics and Cell Biology at the University of Chicago, introduced the prize recipients and presented the award. Edward Boyden accepted the award on behalf of all the prize recipients. An edited version of his acceptance remarks appears below. 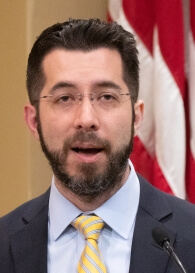 On behalf of all six awardees, let me say how honored we are to receive the Rumford Prize and how grateful we are to the prize jury. It is exciting to see this kind of interdisciplinary work – which goes from microbiology, to neuroscience, to biophysics, to medicine, and everything in between – recognized. Our research is very collaborative. Many of us have worked together as colleagues or as collaborators to try to bring forward the insights being recognized today by the Rumford Prize. Let me also take a moment to personally thank my family, and especially my wife, who has been incredibly supportive throughout the years, and without whom nothing would be possible.

I have been asked to say a few words about what optogenetics is and the impact it is having. It may be useful to start by explaining why it is hard to understand and repair the brain. In the brain, we have many kinds of cells: small cells and large cells, excitatory cells and inhibitory cells – perhaps hundreds, or even thousands, of cell types. And these cells change in different ways in different disease states. Brain diseases affect perhaps a billion people around the world, and none of these diseases can be fully cured – and the treatments that do exist are partial and often have side effects. Thus, one of the big questions in neuroscience is to understand how the activity of specific cells contributes to a pathological state of the brain, or how controlling the activity of specific cells might help overcome a disease state.

Now to compound this complexity even further, there are two other major reasons the brain is so complex. One aspect is the spatial complexity of the brain. In a cubic millimeter of the brain, you have about a hundred thousand cells called neurons, with about a billion connections between them called synapses. And that’s just in a cubic millimeter. Another aspect is that brain cells operate at very high speeds, biologically speaking. They operate with electrical pulses that occur inside the cells that last only a thousandth of a second. So the brain presents incredible spatial and temporal complexity.

So how does optogenetics work? Well, it turns out that all over the Tree of Life you can find these amazing natural proteins called opsins. We have some opsins in our own eyes that convert light into signals that our brain can understand. My colleagues and I have discovered, or used for neural control, opsins from species ranging from algae, to fruit flies, to bacteria, to fungi. In optogenetics, we put the genes that encode for opsins into neurons, using tricks from the field of gene therapy, and then the neurons produce the opsin protein. Then, when we shine light on the neurons, the opsins convert the light into signals that in turn control the neuron’s electrical activity.

The opsins used in optogenetics operate in a way that is different from how the opsins in our eyes work: they can convert light into signals repeatedly, without needing the complex apparatus in our eyes that keeps opsins going.

Second, some of these opsins can convert light directly into electrical signals, without a signaling intermediate. Some of the laureates of the Rumford Prize today were the key people to discover light-driven ion channels in algae, and to characterize them. Some of the others amongst us discovered that they could be used to make brain cells controllable by light.

A lot of serendipity was involved in optogenetics. First, these molecules might not have worked in delicate brain cells, but they did. Second, they might not have had the right speed and efficacy to mediate the fast, strong electrical signals that occur in brain cells, but they did. Finally, in mammalian brain cells we were very lucky that a chemical cofactor, all-trans-retinal, which is needed to make the opsins work, is present in quantities large enough that no additional chemical supplementation is needed.

The impact of optogenetics has been very broad in neuroscience, where it has been used to causally investigate how neurons contribute to behaviors and pathological states in organisms such as the worm C. elegans, the fruit fly D. melanogaster, the zebrafish, and the mouse. In mice, one can use gene therapy vectors to express opsins in specific cells in the brain. Then implanting an optical fiber into the brain, with the other end connected to a computer-controlled laser, lets you stimulate those cells in a temporally precise way.

The basic science knowledge about the brain that emerges can directly inspire new therapies. Let me give an example, a recent study led by a collaborator at MIT, Li-Huei Tsai. She has been working on Alzheimer’s disease. She used one of the opsins called channelrhodopsin-2, one of the molecules that several of my fellow laureates discovered, to activate the brain at a specific frequency, namely, 40 times a second, or 40 Hz. This frequency is sort of a magical frequency in neuroscience – for example, synchronized electrical activity at this frequency goes up during attention. In patients with Alzheimer’s disease, electrical activity at this frequency goes down.

So her lab asked the question, can you boost these oscillations to repair Alzheimer’s? And amazingly, in mice genetically engineered to get Alzheimer’s-like symptoms, optogenetic stimulation of the brain at 40 Hz helped. They had lower levels of amyloid, lower amounts of phosphorylated tau, and other improved symptoms. Helped by Emery Brown, an expert on brain rhythms, the teams wondered if you could drive 40 Hz neural activity noninvasively. This is where you go from the basic science discovery to the design phase. And indeed, the teams went on to figure out that you could induce 40 Hz brain rhythms through visual stimuli and auditory stimuli. Now, Li-Huei and I co-founded a company to do human trials of blinking lights and clicking sounds to see if they can treat Alzheimer’s disease. It could fail – lots of things fail when going from mice to humans. But we should give it a try. And at the very least optogenetics has helped reveal a new modality to be explored for neural therapeutics.

In summary, these technologies are now in use by thousands of researchers all over the field of neuroscience to study behavior and disease, and how to remedy disease. Many powerful discoveries have been made by this year’s laureates. Some of us discovered opsins and figured out how they work. Some figured out how to make opsins better by mutating them. Some discovered how to use opsins to control neurons and to turn brain cells on and off. As you can see, a lot of important interdisciplinary crosstalk has been at play between the molecules, the physics, the cells, and the applications.

One of the other things that is impor­tant to point out is that these molecules come from the natural world. And that is both a testament to the importance of ecology and to the idea that a lot of the big inventions and discoveries in biology come about by looking at specific biological systems and borrowing molecules or functions, adapting them for other purposes. And this is true not just about optogenetics, but for other revolutionary technologies like CRISPR and fluorescent proteins, which also borrow molecules from the natural world to enable biological processes to be seen and controlled. Understanding the natural world, and being open to serendipity, are important: you never know where a discovery might lead over the years.

Let me end by saying again on behalf of my fellow awardees, how truly honored we are to receive the Academy’s Rumford Prize. Thank you very much.