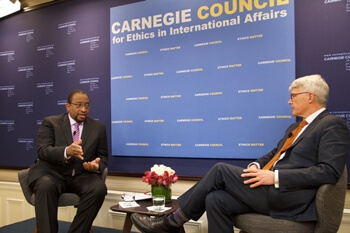 This interview was recorded in February 2017, but Carnegie Council is posting it on Friday August 4 to commemorate the anniversaries of the atomic bombings of Hiroshima and Nagasaki, which occurred on August 6 and 9, 1945, respectively.

Our guest today is Dr. Scott Sagan. He is the Caroline S. G. Munro Professor in the Department of Political Science and a senior fellow at the Center for International Security and Cooperation and the Freeman Spogli Institute for International Studies at Stanford University.

RANDALL PINKSTON: You are the author of several books and articles on nuclear weapons. I think your résumé runs about nine pages. I counted them. You focus on issues such as targeting, deterrence, and the ethics of using nuclear weapons.

In recent months—maybe even recent years—we've heard a lot about presidential executive orders. Today our audience is going to be introduced to a presidential directive that I suspect not a lot of Americans know about, the presidential guidance on the employment of nuclear weapons. We'll get to that in a moment.

But first let's talk about your most recent work. You are one of the co-authors of "Ethics, Technology, and War" and "The Nuclear Necessity Principle: Making U.S. Targeting Policy Conform with the Ethics and Laws of War." Both of those articles—as you know since you wrote them—appear in the Fall 2016 issue of Daedalus, the quarterly publication of the American Academy of Arts and Sciences.

The bottom line, you say, is that there is a difference between how America talks about nuclear deterrence and how it is practiced. Let's explore that perspective, beginning with one of your quotes. You write, "Technological innovations and political developments are changing the nature of warfare, posing complex challenges to traditional standards, which fall under the influence of international law and the just war doctrine."

Before we talk about the innovation and the changes, would you just please review, for those of us who maybe never learned it or forget, exactly what is the just war doctrine, and would you talk about those three main components of just war?

SCOTT SAGAN: Just war doctrine is a set of philosophical principles that most states—not all—aspire to. They include the principle of non-aggression. The United Nations is based on the idea that aggression is wrong and that you can only fight in self-defense or for international peace and security. It includes the idea of distinction, what is often called "noncombatant immunity." We know that civilians die in war, but it is illegal under the Geneva Conventions; and that is a byproduct of just war doctrine, that civilians cannot be deliberately targeted in war.