By
Keith Robert Yamamoto
Project
ARISE II—Advancing Research In Science and Engineering: The Role of Academia, Industry, and Government in the 21st Century
Back to table of contents
Share 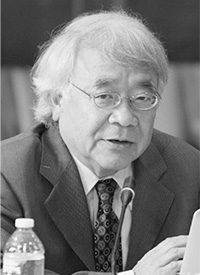 Cochair of the ARISE II committee, Keith R. Yamamoto is Vice Chancellor for Research, Executive Vice Dean of the School of Medicine, and Professor of Cellular and Molecular Pharmacology at the University of California, San Francisco. He is a Fellow of the American Academy of Arts and Sciences.

What if baseball were organized like science? Aspiring catchers or shortstops, like students of physics or molecular biology, would be trained by professional counterparts, and top prospects with dazzling skills would turn pro without learning that by combining their specialized talents, they could create an entirely different game. Managers, owners, and marketers would seek and reward individual stars at each position but would not facilitate or nurture a team culture or even a team game. In science, traditions, policies, and bureaucracies isolate scientific disciplines and their discoveries and technologies, squandering exciting opportunities that could be empowered by merged ideas and efforts–in short, by teamwork. A recent report from the American Academy of Arts and Sciences asserts that knocking down such boundaries would reveal great new opportunities; indeed, a new game.

The report, ARISE II: Unleashing America’s Research & Innovation Enterprise,1 crafted by a committee from academia and the private sector, sees the scientific endeavor today as daunted by the challenge of extracting understanding from floods of disconnected data that threaten to swamp every discipline. To achieve understanding demands unprecedented levels of integration along two separate but intersecting planes. One plane embodies deep collaboration across the physical and life sciences, from basic discovery through the many branches of development and application. It is a call for a new synthesis, reaching well beyond the shared facilities and multidisciplinary programs that are now quite common, toward entities in which the expertise and imagination of researchers and practitioners from separate fields synergize to achieve “transdisciplinarity.” The other plane of integration involves the major stakeholder sectors in the scientific enterprise: academia, government, private industry, and nonprofit organizations. They must move beyond ad hoc “deals” and establish policies, training programs, and mechanisms that bring together people, knowledge, and resources across current stakeholder boundaries.

How might these lofty goals be achieved? The committee advanced 11 specific recommendations. One calls for a revolutionary computational “knowledge network,” expanding on a 2011 National Research Council report.2 This continuously evolving information commons–an electronic resource–would recognize and display links between approaches, findings, and investigators in different fields and sectors, suggesting unrecognized hypotheses or predictions, and “self-assembling” potential teams of collaborators that can address issues that might not otherwise even have been formulated.

To promote synergies among the stakeholder sectors, “grand challenges” were proposed at sufficient scale and scope to capture public imagination, strike creative sparks among both individual investigators and self-assembled teams across the continuum, and incentivize support and participation from multiple stakeholders. Grand challenges seem to be in style these days, albeit at modest scales compared to those envisioned here, but some may provide preliminary glimpses of multistakeholder buy-in. Other recommendations reach toward the broad goals of the report: overhaul academic promotion policies, devise transdisciplinary curricula in which students learn and work in teams, establish technology transfer mechanisms that prioritize knowledge exchange over revenue, create policies that acknowledge and manage conflicts of interest rather than claim to eliminate them, and incentivize cooperation among government agencies. Again, isolated efforts in some of these directions are under way. What is needed is a coordinated strategy. Universities, companies, and private entities that work cooperatively will themselves benefit, and in turn provoke others to join. The impact on science and society could be transformative, not just nationally but globally. Implementing the recommendations of ARISE II may not yield a Field of Dreams, but everyone will get a better chance to play ball.

1 ARISE II is available at https://www.amacad.org//publication/arise-ii-unleashing-americas-research-innovation-enterprise.

From Science 340 (21 June 2013): 1375. Reprinted with permission from the American Association for the Advancement of Science.