What Becomes of Graduates after College? A New Humanities Indicators Report Offers Clues 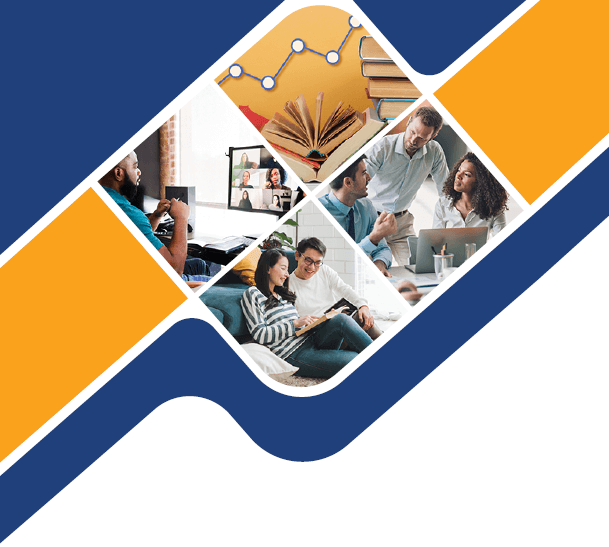 By Robert B. Townsend, Director of Humanities, Arts, and Culture Programs at the Academy; Codirector of the Humanities Indicators

College graduates – regardless of their major – earn considerably more than those without college degrees, and they are highly likely to be satisfied with their jobs and their lives. These are among the key takeaways from a new report, State of the Humanities 2021: Workforce & Beyond, from the Academy’s Humanities Indicators project. The report gathered and analyzed data on a variety of outcome measures, including perceived well-being, earnings, and financial and occupational satisfaction.

According to a national survey from Gallup (analyzed for the report), approximately 91 percent of college graduates were satisfied with their lives in 2019, and a similar share was satisfied with their jobs. Curiously, the percentages were comparable for graduates with bachelor’s degrees from every major, regardless of differences in some of the more tangible measures, such as earnings. Graduates with education degrees, for instance, had the lowest median annual earnings (just $46,000 per year), but tended to report the highest levels of satisfaction on things such as intellectual challenge and job security. Perhaps most strikingly, most education graduates felt they had enough money in 2019, a sentiment frequently expressed by graduates in several higher-earning fields.

At a time when conversations about the value of college degrees are often framed by the earnings of college graduates, the disparity between earnings and the less tangible measures, such as job and life satisfaction, offers an interesting puzzle. Graduates from the arts, humanities, and social sciences often have lower earnings compared to degree holders in other fields, but the Workforce & Beyond report finds that they have similarly high levels of job and life satisfaction. Though the data cannot explain the seeming disparity between the objective and subjective measures, they offer a starting point for a more nuanced discussion about the relationship among fields of undergraduate study, employment, and quality of life.

The data used in the report were gathered prior to the COVID-19 pandemic, but past experience tracking this sort of data for the humanities – particularly through the Great Recession – gives little reason to expect a significant shift in values over the medium term.

Attitudes about Jobs and Careers

The report teases out both some of the values that graduates bring to their careers as well as their satisfaction with those and other aspects of their jobs. For instance, business and engineering majors were the least likely to indicate that contributing to society was a vital aspect of their work, with only around 40 percent citing that as “very important,” compared to 53 percent among all graduates in 2019 (see Figure 1). The contrast with graduates from education and the health and medical sciences was particularly striking, as more than 65 percent of the graduates from those fields cited a contribution to society as an important part of their work. 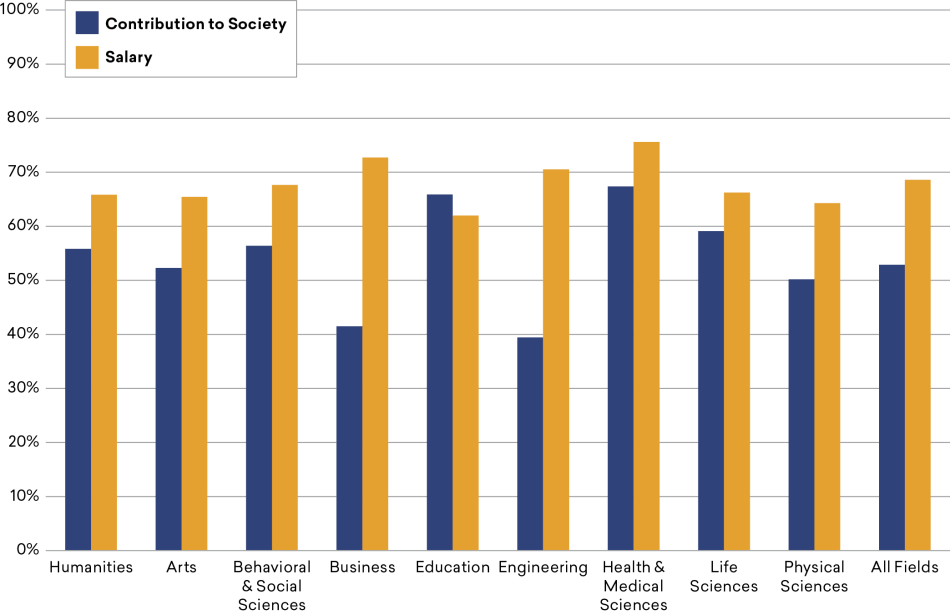 While the report finds that graduates from the arts, humanities, and behavioral and social sciences are similar to college graduates in general on most attitudinal measures, some findings signal potential challenges for these fields. For instance, less than 28 percent of graduates in the arts, humanities, and the behavioral and social sciences (without advanced degrees) thought their job was closely related to their degree. This share was substantially smaller than that for graduates with education and health and medical degrees (all above 56 percent). Approximately 40 percent of the graduates from the humanities and the behavioral and social sciences fields also indicated that they would not choose the same major again (though they might have chosen another major within the field), and a similar share reported they did not believe that their undergraduate institution prepared them for life. These findings were comparable for college graduates generally, but they were substantially larger than the share among graduates from some STEM fields.

Figure 2. Satisfaction of College Graduates with Monetary Aspects of Their Job, by Field of Bachelor’s Degree, 2019 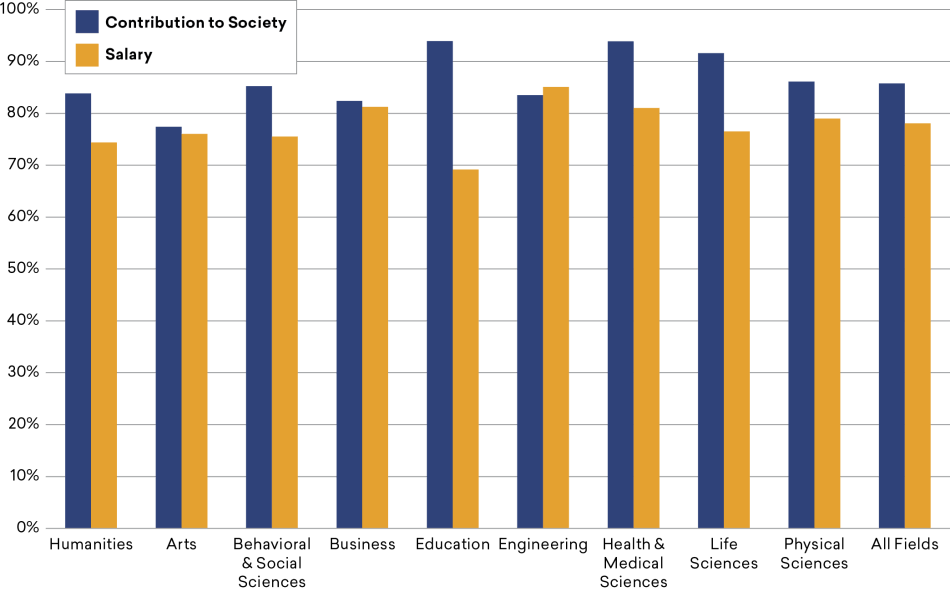 On Earnings and Occupations

Regardless of one’s field, earning a college degree substantially increases the likelihood that one will find employment and have increased earnings over a lifetime. As of 2018, less than 3 percent of college graduates were unemployed. Graduates from education and the health and medical sciences had the lowest unemployment (barely 2 percent among those with only a bachelor’s degree). But even among graduates from the arts, humanities, and the behavioral and social sciences, their unemployment rates were below 4 percent. The unemployment rate, however, among workers who completed high school but did not attend college was substantially higher, especially for younger Americans.

Workers with only a bachelor’s degree had median earnings of $63,000 in 2018, but the earnings ranged as high as $88,000 for those with engineering degrees to a low of $46,000 for education majors. But even the latter was significantly higher than for workers without a college education ($38,000). And earning an advanced degree brings a substantial earnings boost for college graduates from every field, with the median rising by around 33 percent for most fields and increasing by 80 percent for graduates from the life sciences.

Figure 3. Earnings Comparison: Workers with a Terminal Bachelor’s Degree (by Field of Degree) versus Those without a Four-Year Degree, 2018 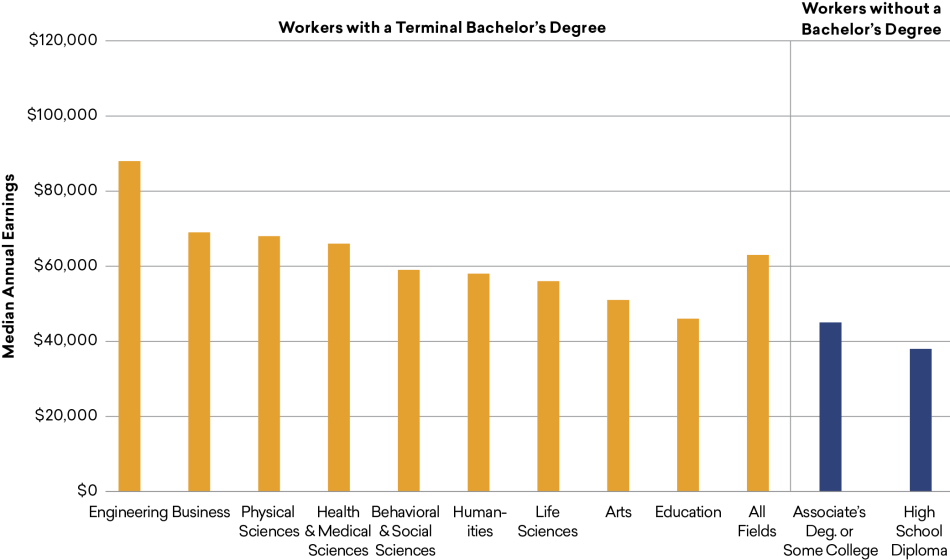 Unfortunately, earning a college degree does not diminish the likelihood that women will earn less than their male counterparts. Among those who hold only a bachelor’s degree, women earned 26 percent less, while the earnings difference among those with advanced degrees was even larger (29 percent). The narrowest gender gap was found among graduates from the health and medical sciences for those with only a bachelor’s degree (less than 9 percent). Among those who had gone on to earn an advanced degree, the narrowest gender gap in earnings was for those in the arts (though still a bit more than 11 percent).

In the spring, the Humanities Indicators will release a report that explores the attitudes and job outcomes of master’s and doctoral degree recipients.

Copies of the Workforce & Beyond report are available upon request; an online version is accessible at www.amacad.org/humanities-indicators.