Through much of our recent history, the United States has had an inconsistent and paradoxical approach to language learning.4

We are a proudly multicultural, polyglot nation, home to more than 350 languages. Yet we continually ignore opportunities to value, nurture, and sustain languages other than English—opportunities that would greatly enhance our personal, cultural, professional, and civic lives, as well as the economic strength and security of our nation.

The United States has both driven and benefited from the spread of English globally. It is the most commonly taught language in the world by a factor of twenty. It is spoken in at least 101 countries and is a critical component of our commercial and diplomatic leadership.5 It is an official language of the United Nations, the World Trade Organization, the International Criminal Court, NATO, and the European Union. In short, the English language is a resource to be cherished and should continue to be an educational priority. 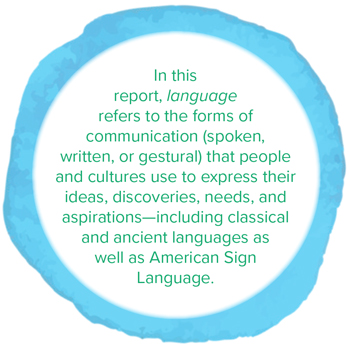 However, the dominance of English, to the exclusion of other languages, has also had adverse and often unforeseen consequences at home and abroad—in business and diplomacy, in civic life, and in the exchange of ideas. We often find ourselves left out of important conversations, misinterpreting what we hear, and failing to understand all-important nuances, precisely because we have undervalued languages other than English in our schools, our communities, and our own homes.

According to the U.S. Census Bureau, more than sixty-five million U.S. residents speak a language other than English at home—a number that has been growing decade by decade since the 1970s. Nevertheless, that number represents only 20.7 percent of the total population, and only a fraction of this cohort speaks, reads, and comprehends a second language well.6 The vast majority of American citizens remain monolingual.

Increasingly, policy-makers and business leaders are seeking to address the real costs associated with our nation’s limited capacity in languages. For example:

An expanded capacity in world languages is also a social imperative, and the provision of language access in the delivery of social services is mandated under Title IV of the Civil Rights Act of 1964 and the Affordable Care Act.18 Growing numbers of American citizens speak languages other than English, and in some major urban areas, as many as half of all residents speak a non-English language at home.19 But all too often, their access to vital services, including health care, and even their ability to exercise simple rights are limited not only by their inability to communicate in English, but by the inability of service providers to communicate, or to secure the services of those who can communicate, in languages other than English.20 For example, recent reports suggest that language barriers (including the scarcity of interpreters and the absence of forms and information in languages other than English) are a particular obstacle to due process in state and federal courts.21 We have an obligation to do better, by educating a pool of experts who read, write, and speak a wide range of languages, and by deploying them where they are needed most. 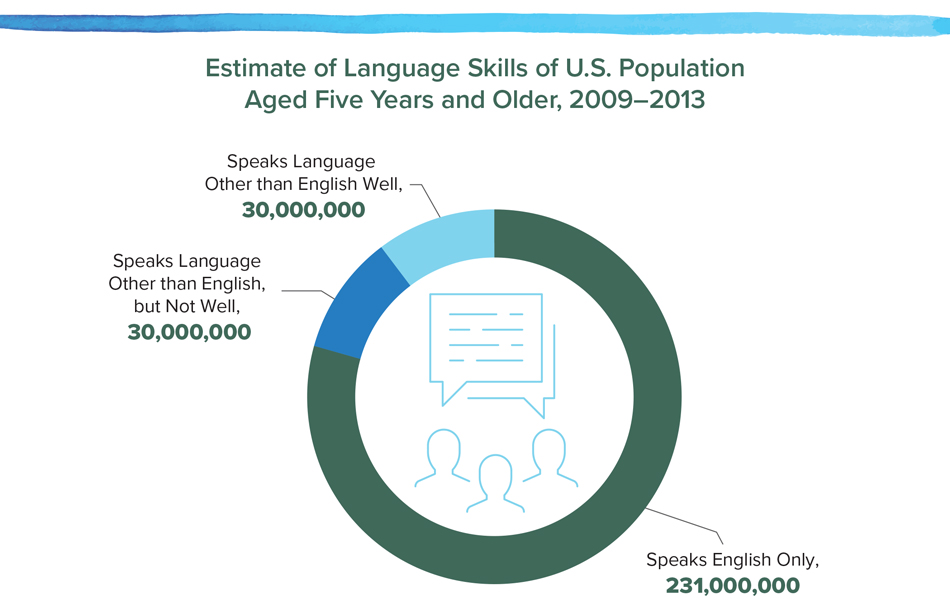 Source: The estimate of the share of the total population that speaks a non-English language at home is based on the American Community Survey. See U.S. Census Bureau, “Detailed Languages Spoken at Home and Ability to Speak English for the Population 5 Years and Over for United States: 2009–2013,” American Community Survey, October 2015, http://www.census.gov/data/tables/2013/demo/2009-2013-lang-tables.html. Estimate of skill levels of adults eighteen and older drawn from Tom W. Smith, Peter Marsden, Michael Hout, and Jibum Kim, General Social Surveys, 1972–2014 [machine-readable data file] (Chicago: National Opinion Research Center at the University of Chicago, 2016), http://gssdataexplorer.norc.org.

Although there are many challenges ahead, there are reasons to believe that the United States can overcome its language deficit. Linguistic diversity is deeply embedded in our history. The English we speak is only one of many European, Native American, African, and Asian languages that have been spoken on the North American continent.22 This diversity is a cherished part of our nation’s past, a fact of our present, and a key to our future: a valuable asset in our relations with other nations and cultures and a benefit to our children as they grow up in an interconnected world. As the home of at least 350 languages in addition to English, we have a strong linguistic base and an unprecedented opportunity to engage other nations and cultures in ways that build lasting, mutually beneficial connections.23 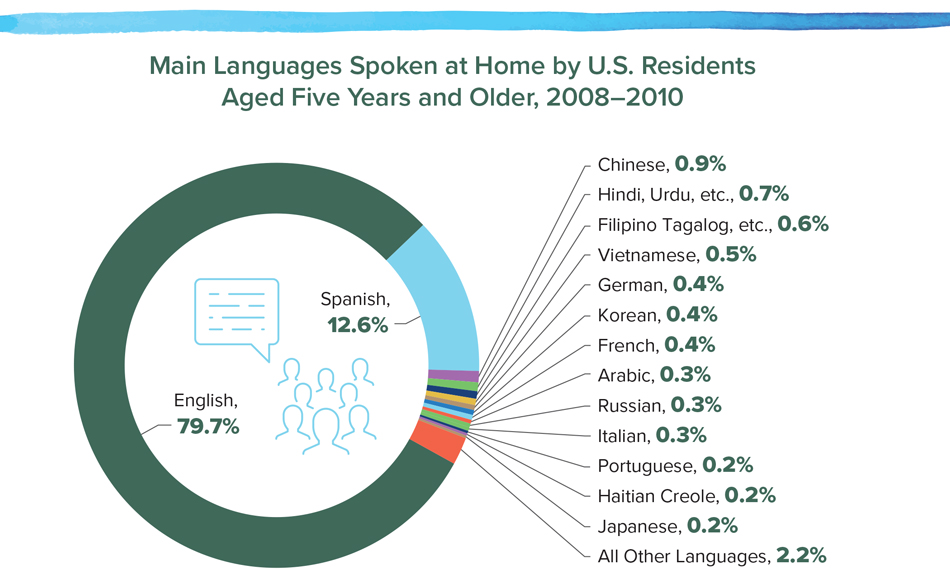 Tapping this vast potential would have real benefits for our personal lives as well as for commerce, security, and diplomacy. Researchers are discovering that language learning, particularly among young children, improves learning outcomes in a variety of other disciplines over a long period of time.24 New empirical evidence suggests that it also encourages the development of empathy and effective interpretive skills.25 Bilingualism enhances overall cognitive ability among the young and old alike, and may even help delay certain manifestations of aging.27 And anyone who has traveled abroad, conversed with a citizen from a different country, or communicated with a speaker of a different language in this country can attest to the ways in which language competency enriches life experiences and provides new opportunities for personal growth.

For all of these reasons, there is an emerging consensus among leaders in education and science, business and government, international relations and the military, and community organizations and nonprofits that English is critical but not sufficient to meet the nation’s future needs, and that a greater public emphasis on language education would yield results far greater than any initial financial investments.28 In the pages that follow—the product of discussion and deliberation over eighteen months—the American Academy’s Commission on Language Learning offers its findings and recommendations to improve the nation’s language capacity. This report focuses on five basic goals:

In combination, these goals outline a strategy to improve language education so that every individual, as well as the nation as a whole, can share in the rewards and benefits of learning a language other than English. Schools, two- and four-year colleges, universities, community organizations, businesses, government agencies, philanthropists, students, and parents all have a role to play in advancing these goals. It is critical that we work together at this moment in history, when there is so much to gain by participating in a multilingual world, and so much to lose if we remain stubbornly monolingual.

Trevor Gunn is vice president of international relations for Medtronic, Inc., the world’s largest medical technology company. He learned French in school and during trips to visit family in France, and Swedish as an exchange student while in high school. Gunn also took several college courses in Russian and became proficient as a result of his business interactions.

Gunn was formerly the long-time director of the Commerce Department’s Business Information Service for the Newly Independent States (BISNIS), the clearinghouse for U.S. government information for doing business in the former Soviet Union. For twenty-two years, he has been an Adjunct Professor at CERES in Georgetown University’s Walsh School of Foreign Service.

In his career, Gunn has worked with the Chamber of Commerce of Southern Sweden, Dover Elevator Corporation (now ThyssenKrupp of Germany), International Executive Service Corps, and on the staffs of the former San Francisco mayor and two U.S. senators from California. He received his bachelor’s degree from the University of San Francisco and his Ph.D. in international relations from the London School of Economics.

“Through the eight languages I tried and the three languages in which I developed proficiency, the accumulated knowledge has allowed me to weave in and out of various countries professionally and with confidence. Knowing other languages has made me a significantly better negotiator and business partner, and contributed immensely to my professional growth and chosen path. Command of a foreign language puts you in charge of your future.”13

James Tobyne holds a bachelor’s degree from Marquette University and a master of science in foreign service from Georgetown University. He was a Freeman Asia Scholar in Beijing and a U.S. Department of State Critical Language Scholar in Suzhou, in addition to completing language and cultural studies in Milwaukee and Taipei. Proficient in Mandarin Chinese, Tobyne is dedicated to promoting international trade, economic development, and cross-cultural communication. He has traveled professionally throughout the United States, Asia, and South America, working for organizations such as the US-ASEAN Business Council, Al Jazeera English, and Export Now. Before joining the e-commerce company Alibaba Group, he served as a Global Project Fellow for the D.C.-based Bertelsmann Foundation and an advisor and field researcher in Ulaanbaatar, Mongolia, for the Millennium Challenge Corporation.

“When I was in high school, I thought learning a foreign language was a complete waste of time and effort. Today, as an employee of one of the world’s largest Internet companies, my language skills—including proficiency in Mandarin Chinese—are an essential component of my job.”26

One Vision for the Future

The 2013 Languages for All initiative, organized by the University of Maryland Center for Advanced Study of Language in collaboration with several national and international language associations, has outlined reasonable attainment goals for the nation’s future language learners.

This vision of the future of language includes:

Source: Languages for All? (College Park: University of Maryland Center for Advanced Study of Language, 2013), accessible at http://www.americancouncils.org/sites/default/files/LFA2013_FinalReport.pdf.

6. U.S. Census Bureau, “Detailed Languages Spoken at Home and Ability to Speak English for the Population 5 Years and Over for United States: 2009–2013.”

13. Email exchange with the Commission on Language Learning, January 2017.

15. Laura J. Junor, “A National Security Crisis: Foreign Language Capabilities in the Federal Government,” statement before the Committee on Homeland Security and Governmental Affairs, Subcommittee on Oversight of Government Management, Federal Workforce, and the District of Columbia, United States Senate, May 21, 2012, 3.

20. Terrence Wiley, Beatriz Arias, Jennifer Renn, and Shereen Bhalla, Language and the Fulfillment of the Potential of All Americans (Cambridge, Mass.: American Academy of Arts and Sciences and the Center for Applied Linguistics, 2015), 20, https://www.amacad.org/multimedia/pdfs/CAL-AAASWhitePaper-LanguagePotentialAmericans.pdf.

26. Email exchange with the Commission on Language Learning, November 2016.