Section 2: How People May Encounter Science

Informal science education refers to experiences that take place outside of a formal classroom setting, including at museums, zoos, aquariums, planetariums, national parks, and botanical gardens.29 These institutions are visited by millions of people each year, including nearly 60 percent of U.S. adults—comparable to public library attendance (see graph below). While not all national parks and botanical gardens feature science, scientific programming can be incorporated into the experience, such as through location-based climate change programming.30 As described in the previous section, visitors interpret the knowledge gained through these experiences differently depending on their background, previous knowledge, and past experience.

Percentage of U.S. Adults, Age 18 or Older, Who Reported Visiting These Institutions at Least Once During the Last 12 Months:

* Visited a zoo or aquarium, natural history museum, or science or technology museum at least once.
Source: National Science Foundation, National Center for Science and Engineering Statistics, Survey of Public Attitudes Toward and Understanding of Science and Technology (1981–2001); and NORC at the University of Chicago, General Social Survey (2008–2016).

Percentage of Respondents Who Reported Visiting Any Informal Science Institution at Least Once During the Last 12 Months:

Source: NORC at the University of Chicago, General Social Survey (2016).

In addition to designing programming to appeal to a demographically diverse audience, informal science centers also must consider the wide range of motivations that draw people to attend. Individuals do not necessarily visit science centers with the sole intention of learning about science. Indeed, for many people, the desire for social experiences and entertainment may be the primary reason for attending. When assessing the needs of the audience for exhibits and programs, therefore, it is crucial that curators, facilitators, and other practitioners start with an understanding of visitors’ motivations, as well as their demographic profiles.

In the Case of Science Museum Audiences, for Example, Motivations Can Include:

The Role of Informal Science Venues in the STEM Learning Ecosystem
STEM learning ecosystems are the cross-sector combination of formal and informal science education opportunities ranging from after-school programs to podcasts to informal science venues.35 In addition to providing hands-on learning experiences, these science venues can support community STEM needs by providing curriculum and teacher training or supporting community activities such as public events and forums. Facilitating connections within a STEM ecosystem can be challenging in rural areas that lack informal science institutions and organizations.36

One popular venue for science communication and engagement is the stand-alone science event, including science festivals and science cafés. Initiatives that incorporate science programming into nontraditional science venues—music festivals, sporting events, and so on—such as Guerilla Science or “Just Add Science,” provide additional opportunities to engage with scientific conten.t37.

Science cafés, such as Science Pub, Science by the Pint, Science on Tap, and Café Sci, are events held in an informal community gathering place (such as pubs or libraries) that allow for dynamic two-way interactions with scientists. Organizations that produce science events for an adult audience include Nerd Nite, Taste of Science, and Pint of Science. The NOVA directory sciencecafes.org includes more than four hundred unique entries.

Science festivals are collaborative annual or biennial event series that celebrate and engage local communities in STEM. The Science Festival Alliance (SFA) formed to establish and sustain such events. In 2017 alone, an estimated 19,892 STEM practitioners at forty-seven SFA festivals, representing a total of 4,671 events, hosted more than two million people across the United States.38 The four 2017 science festivals highlighted below demonstrate the wide variability in format and scope of science festivals: 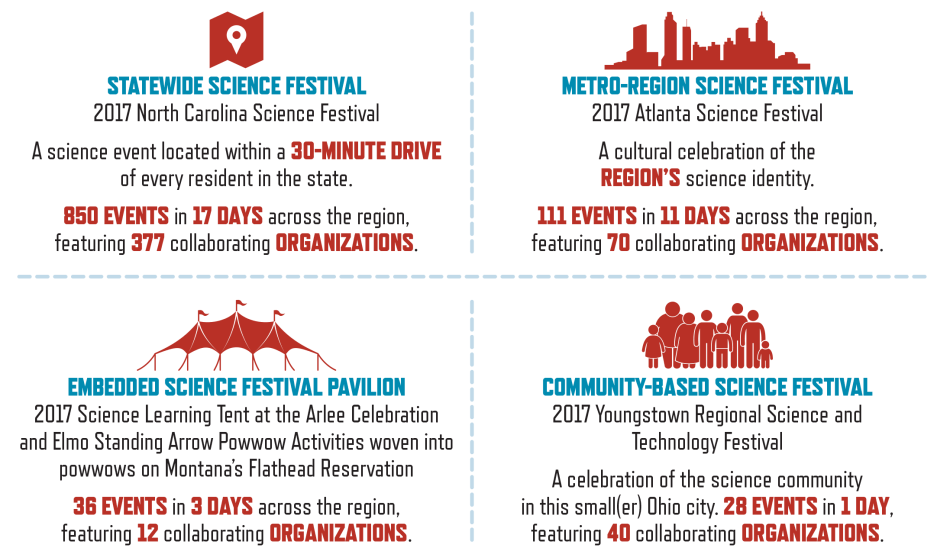 EvalFest is an NSF-funded community of practice that develops evaluation approaches for understanding and explaining the impact of science festivals.39 Evalfest data from 2017 show that while many festival attendees came with their families, 33 percent of participants did not attend with children. Although the demographics of the attendees vary among festivals, on a national scale these data reveal a demographically diverse audience. Evalfest notes that these data were collected primarily at family friendly expos and may not be representative of the entirety of festival activity.

As shown below, common motivations for attending science festivals cited by EvalFest survey respondents included liking science and interest in science. Data also suggest that festivals have positive effects on respondents’ perceptions of stem in their communities: 75 percent of attendees reported that a festival had “quite a bit” or a “great deal” of impact on their understanding of the advances their region or state was making in STEM (data not shown).

Citizen science is an example of public participation in stem research. Citizen science generally refers to public (individual or community) contributions to large-scale scientific research projects, either in person and/or online. In addition to furthering scientific investigation, citizen science projects support educational and social objectives for the participants. These projects are commonly discussed on social media using the hashtags #CitizenScience and #CitizenScientists. Maker-spaces and online platforms can support citizen science projects by providing centralized locations for sharing ideas, equipment, and other resources.

Percentage of U.S. Adults Who Say They Have Ever . . .

Citizen scientists are motivated by everything from curiosity to general interest in science to the desire to contribute to research.40 According to a 2018 National Academies report, for citizen science activities, “science learning outcomes are strongly related to the motivations, interests, and identities of learners.”41 The outcomes of citizen science activities also vary with the project setting and nature of the activity. A majority of the topics in recently published articles mentioning citizen science are drawn from the biological sciences, astronomy, and environmental science (see data below). Some citizen science projects have been shown to raise awareness of new research, promote greater understanding of science, encourage continued participation in engagement activities, and increase monitoring of local issues.42

Social media platforms such as YouTube, Facebook, Instagram, Twitter, and Snapchat provide opportunities for science communication and engagement. Over the last five years, social media use has been dynamic (see graph below). Moreover, use of these platforms varies significantly based on the age of the user. Majorities of adults use Facebook and YouTube.44 Instagram and Snapchat are more popular among eighteen-to-twenty-four-year-olds than they are among older adults.45 Well-known institutions and media outlets are more likely to have a larger presence on social media. For example, at the time of the study in June 2017, National Geographic, Discovery, and Animal Planet had 44, 39, and 20 million Facebook followers, respectively.46 Other Facebook pages, such as IFLScience, have become popular (25.6 million followers in June 2017) without any institutional affiliation.

Percentage of U.S. Adults, Ages 18 and Over, Who Say They Use the Following Social Media Sites/Apps

Science on Twitter
Twitter allows for rapid, real-time communication. As a platform, it can be used for both one-way information sharing (posting a hyperlink) and two-way or group dialogue (mentions).47 Twitter enables users to live-tweet conferences, share papers, build communities, and disseminate science news, making it a lively forum for science engagement. But while Twitter can be a venue for public engagement, scientists’ Twitter audiences mostly comprise other scientists—up until a certain threshold. A recent study found that scientists with over one thousand followers reach a more diverse audience, including people and organizations outside of the scientific community.48

Podcasts use a downloadable audio format to provide an informal, on-demand source of information and entertainment. Storytelling is a common science communication strategy used on podcasts such as Radiolab and Story Collider. According to a recent study, the number of science podcasts increased at an exponential rate from 2010 to 2018.50

Science blogs do many things: from discussing the latest scientific research to analyzing the social impact of a new discovery to sharing a personal story about a day in the life of a researcher. Online comment sections provide writers with opportunities for extended dialogue with their audience. In addition to independent blogs, there are also science blogs published by major news media websites and other professional networks. A 2017 analysis of the profiles of science blog readers found that:52

Whether it is an interest in local conservation efforts that leads a high school student to become a citizen scientist, or a desire to stay current that causes a researcher to follow a science blog, or a shared interest in stem that brings a group of friends to a science festival, understanding audience motivations for participating in particular activities is necessary for identifying the potential outcomes of engagement. Approaches to science communication and engagement that build connections to previous experiences with science and provide opportunities for continued engagement have the potential for long-term effects, such as a higher curiosity about science, different perceptions of science, or behavioral changes based on scientific information.

Engagement around a Shared Event

Opportunities for engagement can arise from current events. For instance, the August 21, 2017, total solar eclipse was estimated to have been viewed directly or electronically by 88 percent of Americans.53 In a subsequent survey, a majority of eclipse viewers found the experience of watching the eclipse to be enjoyable and educational. In the months prior, people reported discussing the eclipse with friends, coworkers, and family and reading stories in newspapers and magazines. Participation in eclipse activities included:54