Science Engagement for the Benefit of Society

Moreover, it is common for the funders and facilitators of science communication and engagement to identify desired outcomes based on broader societal goals, such as greater diversity in the STEM workforce or motivating a local community to address a local conservation issue. The following section provides examples of science communication and engagement activities that seek to achieve specific impacts in the following areas:

This list is not exhaustive; it does not represent all of the ways science communication and engagement can be influential. Similarly, the specific examples of activities and networks highlighted in this section are not meant to convey a standardized approach, but are used to illustrate the different ways science communication and engagement seek to achieve these goals.

Potential approaches to community engagement activities are as varied as their stakeholders, goals, and outcomes. Community engagement activities can range from community-stakeholder engagement and project co-creation as part of global health research, to community participation in research on local environmental change, to efforts to network effectively and engage both professional affinity groups and public constituencies. The Billion Oyster Project is an example of a collaborative project based around a local environmental restoration initiative. Community engagement approaches also have the potential to strengthen scientific studies or avoid harmful outcomes when executed effectively within the appropriate contexts.63 The push for community and stakeholder inclusion in the decision-making on the topic of gene drives is one example of this approach.

The Billion Oyster Project (BOP) is an education and restoration initiative with the goal of restoring one billion live oysters to New York Harbor by 2030 to improve the water quality and health of the ecosystem. This environmental citizen science project includes both a formal middle school curriculum and informal after-school activities. As part of the project-based learning, students grow new oysters on discarded oyster shells donated by local restaurants. bop also plans to create local aquarium exhibits for the purpose of increasing New Yorkers’ “understanding of and personal connection to their local marine ecosystems.”64 BOP has also participated in family festivals, collaborated with exhibitors at arts festivals, and hosted science events.65

Gene drives are a form of genetic engineering that increases the likelihood that a beneficial genetic allele will propagate throughout a population, such as by introducing pathogen resistance in an animal host population. As a result, field trials of gene drives have the potential to impact entire ecosystems. A 2016 National Academies of Sciences, Engineering, and Medicine report on advancing the science of gene drives emphasizes engaging communities, stakeholders, and publics as “critical for successful decision making regarding research, development, and potential release of gene drive technologies.”66 Researchers at the Massachusetts Institute of Technology have directly engaged communities on the islands of Nantucket and Martha’s Vineyard in Massachusetts about genetic engineering approaches to vaccinating the local mice population against Lyme disease. In the early stages of the research, evolutionary biologists attended local town halls and established governance plans with residents. During these community engagement efforts, local citizens raised concerns about the use of gene drives, but have remained open to the potential use of other genetic engineering approaches.67 While a gene drive approach is no longer being considered for vaccinating the island mice against Lyme disease, scientists have continued to develop solutions in partnership with local communities. Researchers are now working to vaccinate the mice population by using immunity based on mouse-derived anti-Lyme antibody DNA.68

As discussed in Perceptions of Science in America, only a small minority of scientific topics are controversial or politically polarized, yet these issues threaten to undermine confidence in scientific research and reduce society’s capacity to develop appropriate public policy. Scientific topics that have generated controversy in public discourse, such as climate change, vaccines, genetically modified organisms (GMOs), and evolution, require specialized approaches to debunking misinformation.69 Science communication and engagement on these issues should use evidence-based methods, dialogue, and trusted messengers.

Trusted Sources on Climate Change: Climate Matters
Climate Matters is a climate communication resource program for American broadcast meteorologists, which on a weekly basis provides localized data and analyses and TV-ready multimedia. The goal of the program is to reduce the barriers to reporting on the impact of climate change in local communities. Meteorologists were identified as effective climate change educators because of their regular access to a sizable audience for whom they are trusted sources of information.70 Moreover, this approach allows for more effective experience-based learning through which information can be communicated in the context of local weather events and will be more likely to influence beliefs and behavior. 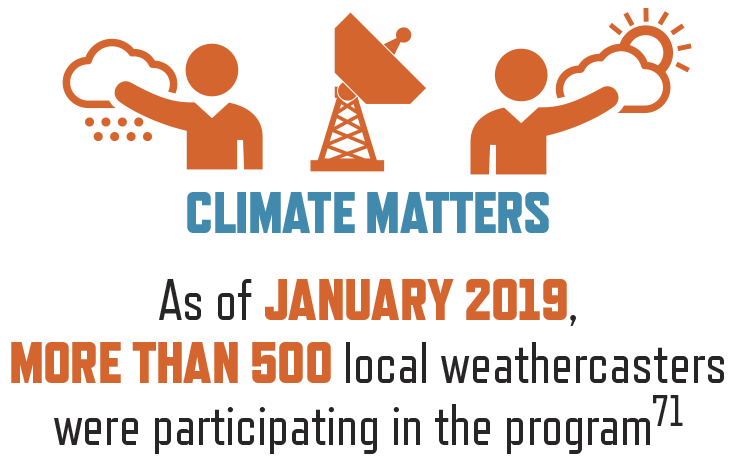 Local Dialogue about Human Evolution: Smithsonian Institution’s Traveling Exhibit, Exploring Human Origins: What Does It Mean To Be Human?
This traveling exhibit, based on the Smithsonian Institution’s David H. Koch Hall of Human Origins exhibit in partnership with the American Library Association, visited nineteen public libraries between 2015 and 2017. The project’s main goal was to encourage conversation about scientific research, specifically on human evolution, within each community. Ten of the nineteen libraries were located in regions of the United States where “evolution might still be a contentious subject.”72 This conversational approach encouraged local community members to speak with one another about science in public libraries and town-hall meetings, to meet scientists (often for the first time), and to model helpful dialogue about scientific findings and public perceptions of science. The programming at each library was tailored to the local community based on feedback from a panel of “community members from diverse religious, educational, civic, scientific, and other backgrounds.”73 The exhibit’s programming also included educator workshops and a clergy tour that highlighted resources on the subject of evolution and the intersection of science and religious faith. According to an external evaluation of this project, an enthusiastic and respectful approach to the scientific findings concerning human evolution predominated in all nineteen communities.74 Even where large numbers of participants expressed strong initial doubts about the subject, 75–86 percent of people who later attended the exhibit or related public events stated that the scientific research “enriched their understanding about what it means to be human.”

Experiences with science can be designed with the expressed goal of lowering barriers to participation of underrepresented groups in STEM activities. A task force of informal STEM education and science communication professionals convened by CAISE has emphasized that efforts should not focus solely on career or workforce goals as outcomes of participation—and that there are other worthy and important goals, such as creating “lives empowered by STEM literacy, knowledge, and identity.75 Communication and engagement scholars and practitioners are therefore increasingly considering issues of diversity and inclusivity with respect to the facilitators, target audiences, and approach. The NSF initiative cited below is an example of a comprehensive approach focused on the goal of broadening participation, whereas the second example illustrates the importance of representations of science in popular culture.

Inclusion across the Nation of Communities of Learners of Underrepresented Discoverers in Engineering and Science (INCLUDES)
INCLUDES is an NSF initiative focused on improving access to STEM education and career pathways so that the STEM workforce “reflects the diversity of the nation.”76 This comprehensive, multiyear program includes funding for pilot programs and networks organized around shared goals and metrics within a collaborative infrastructure. The pilot grants from this project include efforts to “provide STEM engagement for students and communities” and addressing “students’ STEM identity, attitudes and motivation.” For example, the Alliance to Strengthen the STEM Tapestry (ASSIST) is an INCLUDES-supported project that focuses on STEM-disenfranchised populations who “feel alienated, marginalized or incapable of participating in STEM.”77 The assist project focuses specifically on providing STEM engagement activities, including ecological restoration and storytelling, to adults recently released from incarceration, youth who were previously in juvenile custody, and refugee youth. These approaches were built on insights gleaned from previous approaches to bring science to the incarcerated.78

Depiction of Science in Popular Culture

People commonly encounter and experience science through popular culture and entertainment (see Special Section: Science in Everyday Life). Entertainment media such as movies, television, online videos, and video games therefore present an important opportunity to shape cultural expectations regarding who can and should pursue scientific careers.79 Efforts to encourage a more diverse representation of scientists in entertainment can have a ripple effect in which additional conversations, events, and programming are established to expand these depictions. The 2016 film drama Hidden Figures, based on a nonfiction book of the same title written by Margot Lee Shetterly, is one recent example. Hidden Figures tells the story of three African-American mathematicians—Katherine Johnson, Dorothy Vaughan, and Mary Jackson—who made significant contributions to NASA during the space race. In addition to directly amplifying the book’s story of these accomplished women in STEM professions, the release of the film fostered myriad additional activities focused on the untold stories of women in STEM fields, including film screenings, outreach programs, and online discussions. The popular overseas screenings and discussions of Hidden Figures organized by local U.S. embassies and consulates are one high-profile example. The popularity of screenings in eighty different countries led the U.S. Department of State to create the #HiddenNoMore cultural exchange program.80 This program brought forty-eight global women leaders in STEM together in the United States for three weeks to develop best practices for recruiting and training underrepresented groups.

Project
The Public Face of Science
Share
Previous Section
Special Section: Science in Everyday Life
Next Section
Conclusion
Back to table of contents