Foundation Funding for the Humanities: An Overview of Current and Historical Trends 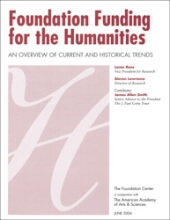 Foundation Funding for the Humanities: An Overview of Current and Historical Trends

Among the data needed to gauge the health of the humanities in American life is a comprehensive, ongoing measurement of foundation support for humanities research and activities. The Academy partnered with the Foundation Center, which annually tracks U.S. foundation giving, to examine and analyze changes in U.S. foundation support for the humanities between 1992 and 2002. An advisory committee of humanities experts reviewed the Center’s humanities coding practices and developed a broader definition of the humanities, including women’s studies, ethnic studies, and other interdisciplinary fields. Using this broader definition, study participants reviewed and analyzed the Foundation Center’s data. The 2004 resulting report is the most detailed examination available of contemporary trends in U.S. foundation funding across the many humanities subfields and disciplines.

The Humanities Indicators is a database of comprehensive statistical information about the humanities in the United States, providing researchers and policy-makers in the private and public sectors with better tools to answer basic questions about areas of concern in the humanities.