In the time this report was drafted, the COVID-19 pandemic spread around the globe, disrupting or shifting nearly all government, economic, and social systems. International large-scale scientific projects are not immune to these disruptions, and scientists around the world have scrambled to maintain operations and continue construction of new facilities as well as they can during the crisis. In addition, there is a growing realization that large-scale science initiatives will be important post-pandemic for addressing the threat of newly emerging infectious diseases that could result in future pandemics and threaten global and national security, economic prosperity, public health, and societal resilience. The important research on the SARS-CoV-2 virus at synchrotron X-ray facilities was highlighted earlier in this report. The importance of such facilities and the international network of scientists who rely on these facilities cannot be overstated in the post-pandemic world.

As one example of the immediate COVID-19 related challenges faced by many scientific projects, CERN was temporarily closed, with most personnel working remotely and only about six hundred people, or 24 percent of the usual staff, on-site to ensure necessary safety. Teleworking was rapidly deployed, with an estimated peak of 13,900 connections to CERN’s remote conferencing tool in one day.96 Even once activities were able to resume, there were constraints on multiple experiments that were intended to occur in the same location, which significantly delayed project goals.97

Progress toward constructing ITER components was jeopardized in 2020 because China and Italy, two early epicenters of the pandemic, were responsible for substantial manufacturing roles. However, critical operations, including the arrival of ITER components from India, Italy, Japan, and China, have been maintained thanks to teleworking and digital communication infrastructure alongside essential on-site staff.98

Across the board, the pandemic has disrupted major components of development and management of international large-scale science projects. These disruptions include a lack of ability to travel for in-person meetings and site visits; an acceleration of the biomedical research community’s trend toward publishing preprints, which moves research more quickly but also increases the risk of amplifying poorly conducted or incomplete studies; supply-chain crises; and everyday loss of access to scientific facilities.

The COVID-19 crisis has taught us many lessons, with more to appear as the effects of the pandemic continue to unfold, including:

COVID-19 will not be the last pandemic we face, with prominent scientists suggesting we may be entering a pandemic era.99 Some predictions estimate that as many as 1.6 million viral species have yet to be discovered in mammals and birds, with between 650,000 and 840,000 of those capable of spreading to humans.100 The risk of these diseases reaching humans is compounded by climate change and the fragmentation of environments due to human encroachment, such as agriculture, deforestation, and urban development.

As COVID-19 has shown, pandemics have the potential to devastate economies, livelihoods, and communities; viruses also have no regard for national borders and politics. Being able to study and respond quickly to unfamiliar pathogens—for instance, by developing public health interventions, drug and treatment therapies, and vaccines—in addition to preventing the emergence of diseases in the first place, requires international scientific collaboration and science-driven policy-making. Collaborations to develop infrastructure for global coordination with established and emerging science partners alike are critical for ensuring that all regions have the research capacity and infrastructure available to respond when the next pandemic hits.101

Many international groups had been preparing for an outbreak such as COVID-19, and now are already hard at work preparing for the next. The World Health Organization (WHO), a specialized agency of the United Nations, has a long history of supporting vaccine campaigns and coordinating responses to disease outbreaks, including the SARS epidemic in 2003 and outbreaks of Ebola in West Africa and the Democratic Republic of the Congo in 2014 and 2018, respectively. The WHO has, of course, also been at the forefront of the response to COVID-19.102 Collaborative efforts like the Global Virome Project are working with a variety of sectors, including business, academia, government, and nonprofit, to conduct essential research in this critical space (See the Global Virome Project).103

The United States has historically been a leader in emerging infectious disease research. The PREDICT program, led by the UC Davis One Health Institute, USAID, EcoHealth Alliance, Metabiota, the Wildlife Conservation Society, and the Smithsonian Institution, was launched in 2009 to identify hotspots for the emergence of zoonotic diseases and propose One Health surveillance methodologies in such areas.104 Since its formation, the program has worked with collaborating scientists and researchers around the world to collect over 140,000 biological samples and detect more than one thousand new viruses, in addition to serving as a capacity-building effort by training scientists and strengthening research laboratories in more than thirty countries in Africa and Asia.105 The program seeks to bring an organized and coordinated scientific response to emerging biological threats. Although it was discontinued in October 2019, just months before the COVID-19 pandemic began, an extension to the program in April 2020 allowed it to resume its efforts and provide key support to partners around the world in the response to COVID-19.106

Researchers continue to advocate for and engage in international collaboration in circumstances of crisis, such as the COVID-19 pandemic.107 This engagement must continue to include both research on the virus SARS-CoV2 and investigations, such as those led by the WHO, into the circumstances that led to the pandemic.108 As a leader in life science and health related research, the United States has a key role to play in the international study and prevention of emerging infectious diseases, as well as the international standards for such studies. The United States also has a vested interest in partaking in such vital collaborations to ensure both national and economic security. As the world braces for the next pandemic, the United States should strongly invest in prioritizing research in global health.

As recently as 2019, some were questioning the need for dedicating substantial funding to research at the animal-human infectious disease nexus.109 Since the emergence of the COVID-19 pandemic just a few months later, the importance of research to prepare and respond quickly to large-scale, global threats has become apparent.

The Global Virome Project (GVP), an international collaboration initially proposed in 2016, seeks to address this need through an ambitious international collaborative effort to build an atlas for infectious diseases.110 Estimating that there are likely 1.67 million undiscovered viruses existing in birds and mammals, with a significant portion of those potentially able to infect the human population, the GVP has begun work to complement the efforts of USAID’s PREDICT program, with its goals to aid in capacity-building and epidemiological analysis, by conducting a large-scale sampling and viral discovery undertaking.111 While the collaboration is still in its early days, it has gathered significant attention in the past few months as COVID-19 spread across the world, although some scientists are still skeptical about its proposed efficacy given that viral sequencing cannot directly predict pathology.112

The collaboration emerged following a gathering of international experts from a variety of sectors at the Bellagio Forum in 2016, where attendees agreed to a set of goals and core principles that would allow the collaboration to build a safe world and quickly respond to and address the threats posed by infectious diseases.113 The GVP engaged stakeholders across the world in Asia, Africa, the Americas, and Europe, including from academia, industry, intergovernmental agencies, NGOs, and the private sector, to build a framework for the GVP collaboration: the development of financing streams, data and sample sharing protocols, collaborative field and laboratory networks, risk assessments, capacity-building strategies, and more.114

Using the 1980s Human Genome Project as its model, the collaboration hopes to catalyze an era of research in the space that will return significantly more than its investment and yield key benefits for the well-being of people around the world.

The project will capitalize on economies of scale in viral testing, systematically sampling mammals and birds to identify currently unknown, potentially zoonotic viruses that they carry. 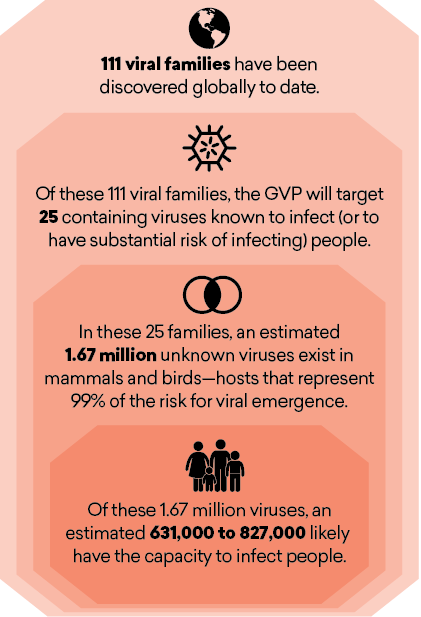