Making the Humanities Count: The Importance of Data 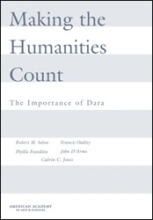 The sciences have long benefited from the availability of comprehensive, up-to-date data that describe the condition of their disciplines — as provided, for example, by the Science and Engineering Indicators, published biennially by the National Science Board. Because no comparable database exists for the humanities, there are great gaps in our knowledge of basic trends in those disciplines.

Soon after the Academy launched the Initiative for Humanities and Culture, it appointed a Task Force on Data Development, chaired by Jonathon Cole (Columbia University), Steven Marcus (Columbia University), and Francis C. Oakley (Williams College). The Task Force commissioned a report that evaluated existing humanities data and assessed the data’s usefulness for answering the kinds of questions routinely addressed by the Science and Engineering Indicators.

The report, titled The Evaluation of Existing Databases for Policy Research on Humanities Fields, revealed the strengths and weaknesses of current resources. The study made clear that existing humanities data sources allow limited use for policy research because they lack uniformity in their measurement techniques, analytic methods, and reporting standards. As a result, advocates for the humanities cannot answer with precision a number of fundamental questions about, for example, enrollment trends in graduate education, the long-term employment of individuals with advanced degrees in specific humanities fields, and the number of individuals with degrees in the humanities who work outside their specialization.

The Academy and collaborating organizations responded to this felt need for more and better data by instituting the Humanities Indicators project. The Task Force invited four individuals familiar with the issues to write essays explaining why the Humanities Indicators are needed: Francis C. Oakley, former president of Williams College; Robert Solow, Nobel Prize winner and professor emeritus in economics at MIT; Phyllis Franklin, executive director of the Modern Language Association; and John D’Arms, president of the American Council of Learned Societies. The Academy published these essays, along with the initial report on existing data in the humanities, in an Academy Occasional Paper, Making the Humanities Count: The Importance of Data.

Funding for this project and publication was provided by Walter B. Hewlett, the William R. Hewlett Trust, the Sara Lee Corporation, the Andrew W. Mellon Foundation, and the Rockefeller Foundation.