The History of Reactor Generations

Figure 1. The Evolution of Nuclear Power 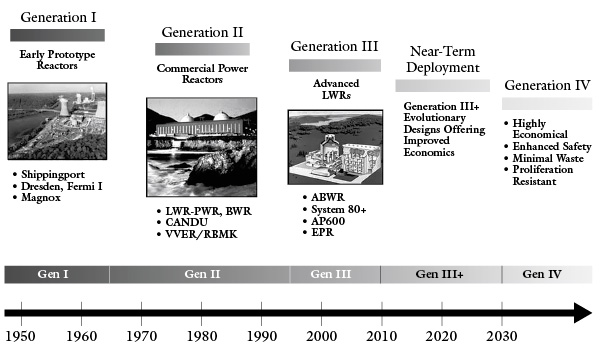 Gen I refers to the prototype and power reactors that launched civil nuclear power. This generation consists of early prototype reactors from the 1950s and 1960s, such as Shippingport (1957–1982) in Pennsylvania, Dresden-1 (1960–1978) in Illinois, and Calder Hall-1 (1956–2003) in the United Kingdom. This kind of reactor typically ran at power levels that were “proof-of-concept.” In the United States, Gen I reactors are regulated by the Nuclear Regulatory Commission (NRC) pursuant to Title 10, Code of Federal Regulations, Part 50 (10 CFR Part 50).

Gen II systems began operation in the late 1960s and comprise the bulk of the world’s 400+ commercial PWRs and BWRs. These reactors, typically referred to as light water reactors (LWRs), use traditional active safety features involving electrical or mechanical operations that are initiated automatically and, in many cases, can be initiated by the operators of the nuclear reactors. Some engineered systems still operate passively (for example, using pressure relief valves) and function without operator control or loss of auxiliary power. Most of the Gen II plants still in operation in the West were manufactured by one of three companies: Westinghouse,3 Framatome4 (now part of AREVA5), and General Electric (GE).

The Korean Standard Nuclear Power Plant (KSNP), which is based on Gen II technology developed by Combustion Engineering (now Westinghouse) and Framatome (now AREVA), is now recognized as a Gen II design and has evolved to become the KSNP+. In 2005 the KSNP/KSNP+ was re-branded as the OPR-1000 (Optimized Power Reactor) for Asian markets, particularly Indonesia and Vietnam. Six OPR-1000 units are in operation, and four are under construction. China’s existing and planned civilian power fleet is based on the PWR. Two important designs used in China are the improved Chinese PWR 1000 (the CPR-1000), which is based on Framatome’s 900 megawatt (MW) three-loop Gen II design, and the standard PWR 600 MW and 1,000 MW designs (the CNP series).

These designs require relatively large electrical grids, have a defined safety envelope based on Western safety standards, and produce significant quantities of used fuel that require ultimate disposition in a high-level waste repository or reprocessing as part of a partially or fully closed fuel cycle. The economics of existing Gen II plants and of those under construction or in the planning stage are generally favorable, particularly in Asia (Table 1 shows a schedule of plants under construction as of November 2010).6

The extraordinary events unfolding at the Fukushima Daiichi and Daini nuclear power plants are being assessed by the technical and regulatory experts both in the United States and across the world. At press time, a full assessment is not possible. We have learned that an increased safety focus will likely be required and, at a minimum, will focus on four safety systems: 1) Mark I BWR containment structures; 2) common-mode emergency core cooling capability resulting from loss of emergency backup power; 3) the performance of mixed-oxide fuel in Gen II reactor designs; and 4) critical safety analyses of the various extant used fuel cooling pool designs.

Gen III nuclear reactors are essentially Gen II reactors with evolutionary, state-of-the-art design improvements.7 These improvements are in the areas of fuel technology, thermal efficiency, modularized construction, safety systems (especially the use of passive rather than active systems), and standardized design.8 Improvements in Gen III reactor technology have aimed at a longer operational life, typically 60 years of operation, potentially to greatly exceed 60 years, prior to complete overhaul and reactor pressure vessel replacement. Confirmatory research to investigate nuclear plant aging beyond 60 years is needed to allow these reactors to operate over such extended lifetimes. Unlike Gen I and Gen II reactors, Gen III reactors are regulated by NRC regulations based on 10 CFR Part 52.9

The Westinghouse 600 MW advanced PWR (AP-600) was one of the first Gen III reactor designs. On a parallel track, GE Nuclear Energy designed the Advanced Boiling Water Reactor (ABWR) and obtained a design certification from the NRC. The first of these units went online in Japan in 1996. Other Gen III reactor designs include the Enhanced CANDU 6, which was developed by Atomic Energy of Canada Limited (AECL); and System 80+, a Combustion Engineering design.10

Only four Gen III reactors, all ABWRs, are in operation today. No Gen III plants are in service in the United States.

Hitachi carefully honed its construction processes during the building of the Japanese ABWRs. For example, the company broke ground on Kashiwazaki-Kariwa Unit 7 on July 1, 1993. The unit went critical on November 1, 1996, and began commercial operation on July 2, 1997—four years and a day after the first shovel of dirt was turned. If the U.S. nuclear power industry can learn from Hitachi’s construction techniques, many billions of dollars and years of time might be saved.11The Shaw Group and Westinghouse have adopted modular construction practices in launching a joint venture for a Lake Charles, Louisiana, facility that will manufacture modules for the AP-1000.

Examples of Gen III+ designs include:

Manufacturers began development of Gen III+ systems in the 1990s by building on the operating experience of the American, Japanese, and Western European LWR fleets. Perhaps the most significant improvement of Gen III+ systems over second-generation designs is the incorporation in some designs of passive safety features that do not require active controls or operator intervention but instead rely on gravity or natural convection to mitigate the impact of abnormal events. The inclusion of passive safety features, among other improvements, may help expedite the reactor certification review process and thus shorten construction schedules.14 These reactors, once on line, are expected to achieve higher fuel burnup than their evolutionary predecessors (thus reducing fuel consumption and waste production). More than two dozen Gen III+ reactors based on five technologies are planned for the United States (Table 2 lists applications and their status as of November 2010).

Based upon Aneesh Prabhu, “The Expansion of Nuclear Power Plants in the U.S.: What Could Get in the Way?” in S&P’s Special Reports: Can the U.S. Nuclear Power Industry Hold Its Spot as the World Leader? (New York: Standard & Poor’s, 2010). Modified and updated with information found at http://world-nuclear.org/NuclearDatabase/Default.aspx?id=27232 (accessed on February 11, 2011).

Gen III and III+ designs have a defined safety envelope based on Western safety standards and set the worldwide standards for safeguards and security. However, they have also produced a legacy of significant quantities of used fuel, require relatively large electric grids, and present public-acceptance challenges.

2. The frequency of core damage to Gen II reactors is reported to be as high as one core damage event for every 100,000 years of operation (10 −5 core damage events per reactor year for the BWR(4)). In light of the ongoing events at the nuclear power plants in Fukushima, Yamato Province, Japan, the authors strongly suggest that the core damage frequencies be reanalyzed.

5. The parent company, incorporated under French law, is a Société Anonyme (S.A.).

8. These standardized designs are intended to reduce maintenance and capital costs. The capital cost requirements are highly dependent on country and international material, labor, and other considerations.

9. Following passage of the Energy Policy Act of 1992, the NRC adopted an additional licensing pathway option: the combined construction and operating license (COL). Except for the licensing of Brown’s Ferry I and, potentially, a small modular reactor construction application at the TVA Clinch River site, all recent licensing applicants have chosen this pathway, which is seen as a streamlined approach (see Table 2).

11. Institutional and regulatory differences between the Japanese and U.S. systems may mitigate some of these savings.

12. The US-APWR is designed to be 1,700 MW because of longer (4.3m) fuel assemblies, higher thermal efficiency (39 percent), and a 24-month refueling cycle. In March 2008, MHI submitted the same design for EUR certification and partnered with Iberdrola Engineering and Construction to build these plants in the EU.

13. ATMEA I is one of the three technologies Jordan is considering for its next power plant.

14. Because no COL has been issued to date, this is an opinion of the authors and might not be shared by nuclear manufacturers of active nuclear safety systems. COL, as defined by the Code of Federal Regulations, means a combined construction permit and operating license with conditions for a nuclear power facility.

17. NuStart Energy is a limited liability corporation comprised of ten power companies, created in 2004 for the dual purposes of: 1) obtaining a Construction and Operating License (COL) from the Nuclear Regulatory Commission (NRC), using the never before used, streamlined licensing process developed in 1992 and 2) completing the design engineering for the selected reactor technologies.