Public attitudes will be crucial in determining whether nuclear technologies are part of the portfolio of energy technologies on which the world relies to confront the challenges of the twenty-first century. Two persistent questions are “What is safe enough?” and “What are we going to do about the waste?” Switching from active to passive safety features is a key component of addressing the safety question. Long-term dry cask storage addresses the second question. However, in the very long-term, we will need to develop and implement an acceptable strategy for the disposal of high-level waste and used nuclear fuel. Thus, for the next few decades, the long-term waste issue will remain a nettlesome problem for nuclear energy.

In a highly stressed credit market, the price tag for nuclear construction— at least in the Western world—is too high. The latest overnight cost estimates for a dual-unit nuclear plant with an aggregate capacity of 2,236 MW is $5700 per kilowatt,28 a doubling in estimated overnight costs over the last 3-4 years. The investment community has shown an increasing interest in SMR designs because of these escalating costs and related financial challenges.

ANL, as part of its update of the 2004 economic study The Economic Future of Nuclear Power, is conducting an extensive analysis of the life-cycle costs of both large reactors and SMRs. The revised study will also offer detailed insights into the recent cost increases. The study team is consulting with nuclear vendors (including B&W, NuScale, and Westinghouse) to ensure that the nuclear utility industry plays an integral part in the analysis.

The updated study will focus on key parameters and policy options and will address issues President Obama identified in a recent address on U.S. energy policy. 29

The study team will use cost estimates for factory-produced modular units and compare this methodology to construction practices used in building larger units. A detailed sensitivity analysis will be performed on the key design and manufacturing parameters. This task requires collaboration with vendors to obtain data on

In Asia, 115 nuclear power reactors are in operation, 39 are under construction, and firm plans exist to build an additional 87. If an additional 185 proposed reactors are eventually deployed, this would represent an aggregate electrical capacity of more than 400 GWe in the region. In 2010 alone, this region has exhibited four out of the five units connected to the grid and seven out of the ten where construction has been initiated. Much of the expansion of nuclear power in this region is driven by concerns about energy security, and thus the financing concerns that dominate in the Western world are not as prominent and determinative here.

The Emerging Roles of China, Russia, the Republic of Korea, and India

The future economics of nuclear energy will be determined, in part, by the tooling up and supply chain improvements currently underway in Russia and several non-Western states. Russian and Chinese suppliers will soon meet the needs of their domestic markets and are beginning to ramp up in the expectation of large-scale exports. Korean industry provides components internationally and by 2013 will possess the capacity to forge even the largest nuclear plant components.30 The Republic of Korea’s new very heavy forging capacity will join that of Japan (JSW), China (China First Heavy Industries), and Russia (OMX Izhora). Japan and Korea are already building further capacity (JSW and Doosan, respectively), as is France (Le Creusot), and new capacity is planned in both the United Kingdom (Sheffield Forgemasters) and India (Larsen & Toubro).

GE Hitachi Nuclear Energy (GEH) recently announced it has signed a nuclear power plant development agreement with India’s top engineering and construction company, Larsen & Toubro Ltd. The agreement with L&T is an important part of GEH’s strategy to establish an extensive network of local suppliers to help build a future GEH-designed Advanced Boiling Water Reactor (ABWR) power station in India. The power station is one of several being planned by India to increase the country’s nuclear generation capacity more than tenfold over the next two decades—from 4.1 GW today to 60 GW by 2030. The nuclear power initiative is a key part of India’s broader plan to expand its energy infrastructure to meet the country’s surging demands for electricity.

The paradigm for GEN III+ plants is evolving. If they can be designed, manufactured, and operated economically to replace aging coal plants, the opportunities for nuclear energy to mitigate climate change will be enhanced. The ANL study will analyze this possibility.

The electric grid infrastructure in many parts of the world is unable to support the deployment of large nuclear power plants. Deployed systems must be appropriate to the scale of the national electric grid and other institutional capabilities. For example, building gigawatt-scale nuclear plants assumes the presence of an appropriately scaled electric grid infrastructure. If this infrastructure is not present, and it is not in many developing countries, then different technologies are needed, namely, grid-appropriate (modular) nuclear reactors. However, the economics of SMRs must be carefully considered. The ANL study will analyze the economic opportunities of deploying SMR technology.

Today, large plants operating in the United States set a high standard for safety, availability, and cost competitiveness. To enter this marketplace successfully, SMR and Gen IV designs must offer a compelling promise of even higher performance or serve a new mission such as waste disposition. In overseas markets, considerations other than economics—for example, energy security—may be determinative, but the economics of nuclear power vis-à-vis its alternatives will also play an important role. Additional development and demonstration is required to bring overnight costs for SMRs to a point that is comparable to commercial-size Gen III units (Figure 3). Finally, the nonproliferation and safety benefits of SMRs will remain unclear until more SMR specifications are known. 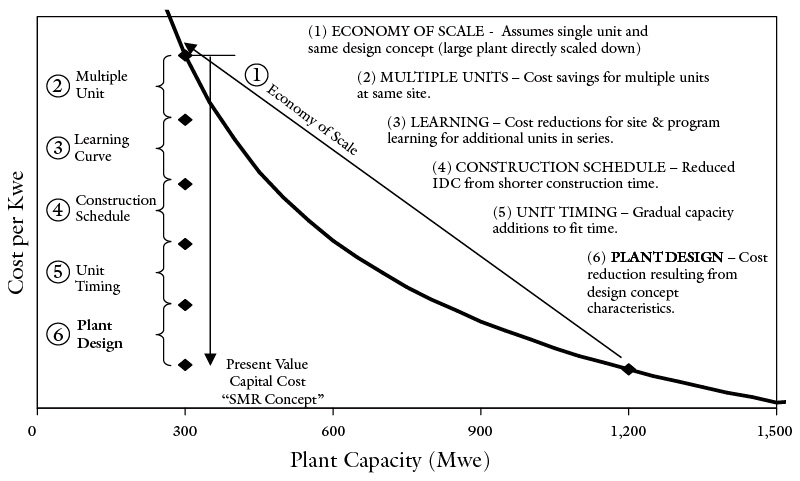 For SMRs to be economically feasible, their overnight cost must be comparable (on a cost per kWe basis) to the overnight cost of large nuclear plants. Provided by and reprinted with permission of Westinghouse Electric Corporation.

29. “To meet our growing energy needs and prevent the worst consequences of climate change, we’ll need to increase our supply of nuclear power. It’s that simple. This one plant, for example, will cut carbon pollution by 16 million tons each year when compared to a similar coal plant. That’s like taking 3.5 million cars off the road…. On the other side, there are those who have long advocated for nuclear power—including many Republicans—who have to recognize that we’re not going to achieve a big boost in nuclear capacity unless we also create a system of incentives to make clean energy profitable. That’s not just my personal conclusion; it’s the conclusion of many in the energy industry itself, including CEOs of the nation’s largest utility companies.” Barack Obama, “Remarks by the President on Energy in Lanham, Maryland, IBEW [International Brotherhood of Electrical Workers] Local 26, Lanham, Maryland,” February 16, 2010, http://www.whitehouse.gov/the-press-office/remarks-president-energy-lanham-maryland.

30. Doosan Heavy Industries is investing in casting and forging capacity to supply reactor pressure vessels and steam generators for AP-1000 reactors in China and the United States.

31. This assumes that the Siemens’s 30 percent stake is sold to the French government. According to Bloomberg (December 2010), AREVA will raise €900 million ($1.2 billion) in a share sale, bringing in a Kuwaiti sovereign wealth fund alongside the French state to help finance investments.

32. KFPCO owns 51 percent, and public shareholders own a minority stake. In December 2009, KFPCO, supported by Doosan Industries, Hyundai, KOPEC, Samsung, and Westinghouse, as subcontractor, won a contract to build four reactors in the United Arab Emirates. This is just one example of significant infrastructure projects in the Middle East, including desalination plants at Burj Khalifa.

33. The Chinese central and provincial governments are funding all CNNC and SNPTC reactors.