Over the past several decades, surveys from leading public opinion research groups have evaluated Americans’ perceptions of science from a variety of angles, including confidence in science as an institution, views on the impact of science on society and the economy, and support for science funding. Polling data reveal a complex relationship between citizens and scientists wherein scientists’ achievements are generally recognized and valued, but views on certain science-related issues are context-dependent. These divergences differ according to political leanings, age, race, education, religious beliefs, and other factors, and they hold implications for policy development and other public decision-making processes.

One goal of this publication is to improve understanding and awareness of the public’s perceptions of scientists among science communicators, advocates, and researchers. A second objective is to encourage new scholarship on these topics. Through a heightened awareness of the current landscape and the pursuit of new analyses, the ultimate goal is to systematically improve science communication and strengthen support for science.

This report presents a portrait of how science is perceived in America, based primarily on previously reported polling data (see Overview of Data Sources on page 2). Nationally representative polling data from NORC at the University of Chicago,1 the National Science Board, and the Pew Research Center highlight general perceptions of science and how those perceptions vary among different populations. Market research studies from ScienceCounts and Research!America provide additional context for these data as well as insights into the factors that shape individuals’ attitudes toward science and their support for public investment in research. This compilation of data also underscores the value of public opinion research, along with the need for additional research and more nuanced surveys. It will be increasingly important to ensure that the underlying methodologies for data collection and analysis be publicly available, particularly as data collection by private entities becomes more common.

To better understand the various factors that influence perceptions of science, the report is divided into three sections:

Section 1 provides an overview of people’s confidence and trust in science as an institution, the perceived impact and benefits of science, and support for research and scientists. It shows that overall confidence in the leaders of the scientific community has been relatively stable over the past few decades. Furthermore, many people support federal investment for scientific research as well as scientists’ role in shaping policy. Confidence declines, however, in certain scenarios. When findings go against the interests of the sponsor of the research, for example, the public is less likely to trust that the scientist will report the findings. Additionally, although people are aware of the benefits of research, some feel that scientific discoveries make their way of life change too fast.

One complication for thinking about public views of science stems from the scope of the scientific enterprise and lack of consensus about science’s boundaries. Public views of science may vary depending on the types of “science” that come to mind in different contexts (see Defining “Science” on page 3).

Section 2 examines these questions through the lens of demographic context, revealing opinion differences based on political party and ideology, age, education level, income level, gender, race, and religion. These data make clear that no single monolithic “public” exists when considering views on scientists and scientific issues. For example, general confidence in scientific leaders varies by age, race, gender, political affiliation, education, and geographic region. People prioritize different outcomes of scientific research depending on their education and ideology. Lower educational attainment is also correlated with greater skepticism about the benefits of scientific research and concerns about the resulting pace of change.

Section 3 examines the associations between demographics and other factors and opinions on particular scientific issues. It presents case studies that illustrate the variations in trust and perceptions on three issues: vaccinations, genetically modified foods, and climate change. For example, people aged 18–29 are less likely to view childhood vaccines as safe compared with older populations, although they view medical scientists as equally trustworthy. The data in Section 3 are correlative, not causative, and highlight the need for additional research into the underlying influences on perceptions on specific science issues. These additional insights will allow for theory-based analyses that could inform more targeted approaches to helping the public evaluate scientific information.

The report shows how academic analysis of these patterns can help generate evidence-based explanations for how public opinion is shaped. Each section concludes with a discussion of several critical, underexamined questions that require more attention from scholars, pollsters, and funding organizations.

Although polling on trust and support for science fluctuates on some specific scientific issues, overall perceptions of science remain strong relative to other professions. The degree to which this support for science and scientific research is reflected in science policy decisions is a question that requires further consideration. As scientific organizations and communications professionals seek to develop evidence-based approaches to science communication and engagement, it will be critical to expand the scope of, and support for, studies on the factors that shape attitudes toward science.

See Appendix A for more information on polling methodologies. Additional information on error margins and statistical methods can be found by consulting each data source.

NORC at the University of Chicago is an independent, nonpartisan research institution formerly known as the National Opinion Research Center. Since 1972, NORC has produced the biennial General Social Survey (GSS) to provide insight into U.S. adults’ perspectives on specific issues, including confidence in scientific leaders.

Pew Research Center is a nonpartisan fact tank that conducts public opinion polling on domestic and international issues and trends. This report presents data from five recent surveys looking at general perceptions of science as well as attitudes on several particular issues, including vaccines, genetically modified foods, and climate change. Polling data are a representative sample of adults in the United States.

Research!America is a nonprofit public education and advocacy alliance that conducts public opinion polling to gauge Americans’ attitudes toward medical, health, and scientific research. This report focuses in particular on data from America Speaks: Volume 17 and Public Perception of Clinical Research.

ScienceCounts is a nonprofit established in 2014 that is focused on enhancing public support for federally funded research. This report draws on unpublished data from the organization’s “Raising Voices for Science: Exploratory and Benchmarking Survey,” which was designed to gain a greater understanding of attitudes toward science and support for the government’s role in funding research.

The term “science” encompasses a range of disciplines in the physical, social, and life sciences, along with applied fields, such as engineering and medicine. Science can be defined as “the use of evidence to construct testable explanations and predictions of natural phenomena, as well as the knowledge generated through this process.”2 However, the word “science” is interpreted differently by different individuals. Often, public opinion polling does not identify whether an individual perceives “science” to mean medical treatments, technological advancements, or fundamental research in either a particular field or across multiple fields (such as chemistry, physics, biology, psychology, or sociology). Based on the context, science may also be viewed generally as an institution, a body of facts, or a process. When interpreting the available survey data, it is important to consider the range of responses a question might prompt. 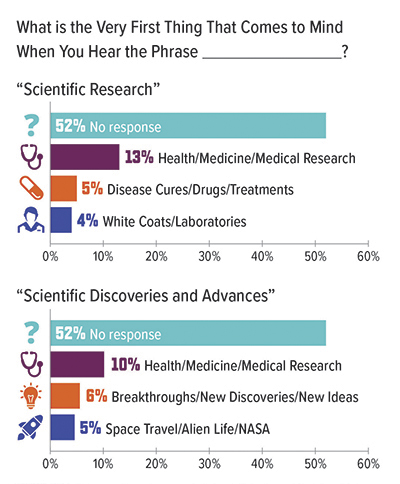 Early efforts to understand the factors underlying public attitudes toward science led to the development and popularization of the so-called deficit model, which predicted that improving science literacy and knowledge would lead to more favorable public attitudes toward science. A majority of studies in this area, however, support only a small positive relationship between science knowledge and perception.3 As a result, social scientists increasingly focus on other factors that may play a larger role in shaping public perceptions of science.

A more nuanced approach to studying the role of science literacy also needs to be considered. Historically, “science literacy” has been defined as basic knowledge of science facts, and research on this topic has relied on assessments of content knowledge and understanding of science principles. As explained in a 2016 report from the National Academies of Science, Engineering, and Medicine, the definition of science literacy among scholars in the field has changed over recent years to include such concepts as “understanding of scientific processes and practices, familiarity with how science and scientists work, a capacity to weigh and evaluate the products of science, and an ability to engage in civic decisions about the value of science.”4

To date, research on the connection between science literacy and public attitudes toward science has mainly used the previous, narrower definition of the concept. Moreover, the influence of science knowledge on attitudes varies depending on the specific science issue in question. In some cases, greater science literacy may even be inversely correlated with agreement with the scientific consensus (see Research Highlight on page 26). A 2015 report from the Pew Research Center highlights how science knowledge varies by demographic factors and increases with education attainment.5 More research is necessary to understand the circumstances in which improving science literacy could positively influence perceptions.