Percentage of U.S. Adults with a “Great Deal” of Confidence in the Leaders of the Following Institutions: 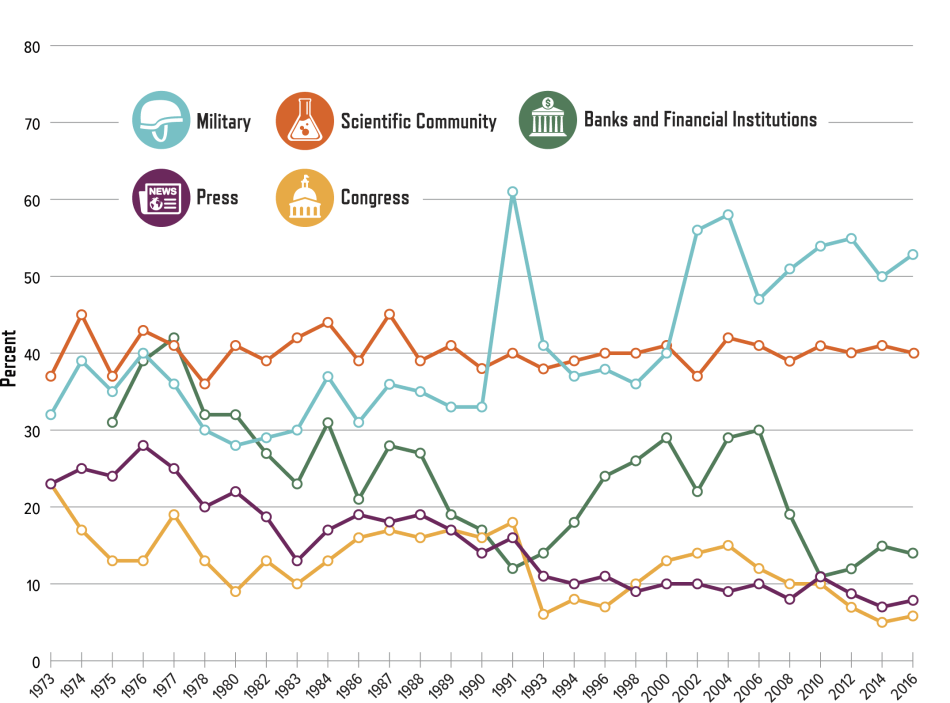 Percentage of Respondents Who Trust Research Scientists to: 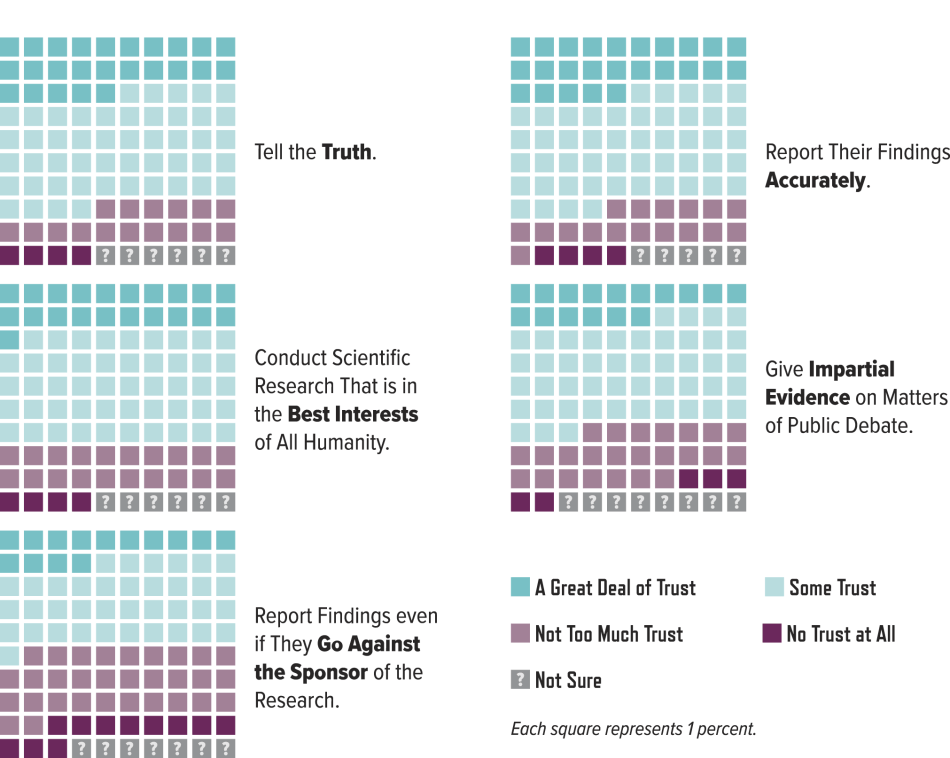 Although overall confidence remains high, the level of trust in research scientists may vary based on their perceived responsibilities. In a recent exploratory market research study by ScienceCounts, approximately three-quarters of respondents placed either a “great deal” or “some” trust in research scientists to tell the truth and to report their findings accurately. By comparison, respondents expressed less trust in scientists to report findings that disagree with the interests of the research sponsor. Recent studies suggest that communicators should use approaches that convey trustworthy intentions rather than attempts at persuasion, which may be seen as indicative of an underlying agenda.1

A Majority of Americans Views Scientific Research as Beneficial . . .

Percentage of People Who Say That: 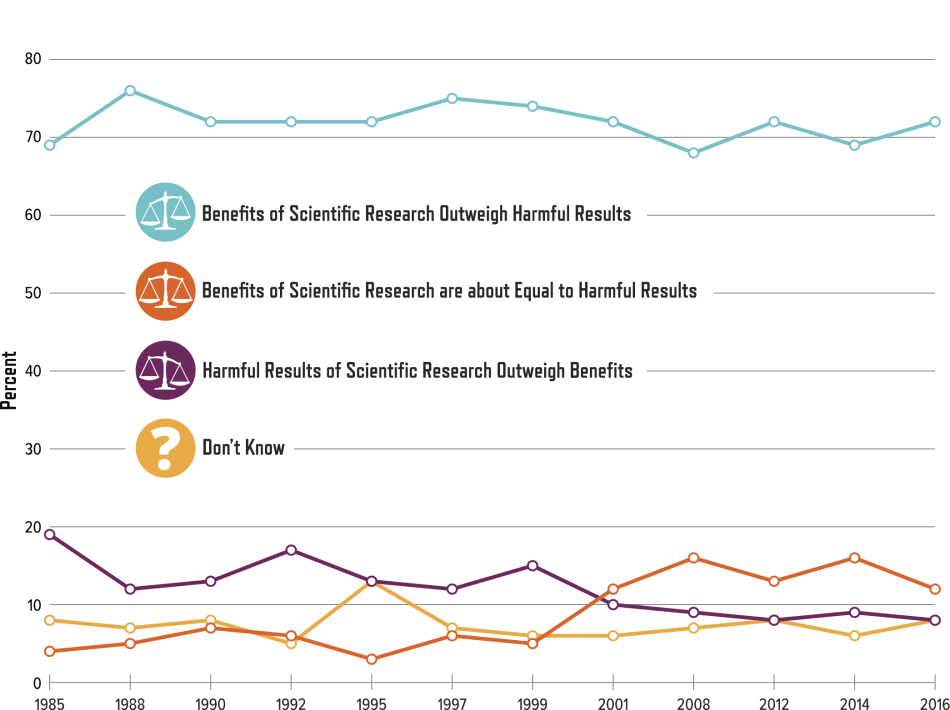 Source: National Science Board, Science & Engineering Indicators (2018). Data from 1979–2001 collected by the National Center for Science and Engineering Statistics; and from 2006–2016 collected by NORC at the University of Chicago, General Social Survey. See Appendix A for information on survey methods.

Many surveys have examined how the public perceives the impact of science on societal progress, well-being, and the economy. In 2016, 72 percent of U.S. adults thought the benefits of scientific research either strongly or slightly outweighed harmful results. Consistent with this observation, a 2015 Pew Research Center study revealed that 79 percent of U.S. adults believe science has made life easier for most people, whereas only 15 percent believe that science has made life more difficult (data not shown).2 Although a clear majority perceives science as beneficial, this sentiment varies with demographic criteria, including education, income, age, and science knowledge (see page 16).

. . . But Many Are Concerned about the Pace of Change

Percentage of People Who Agree or Disagree with the Statement “Science Makes Our Way of Life Change Too Fast”: 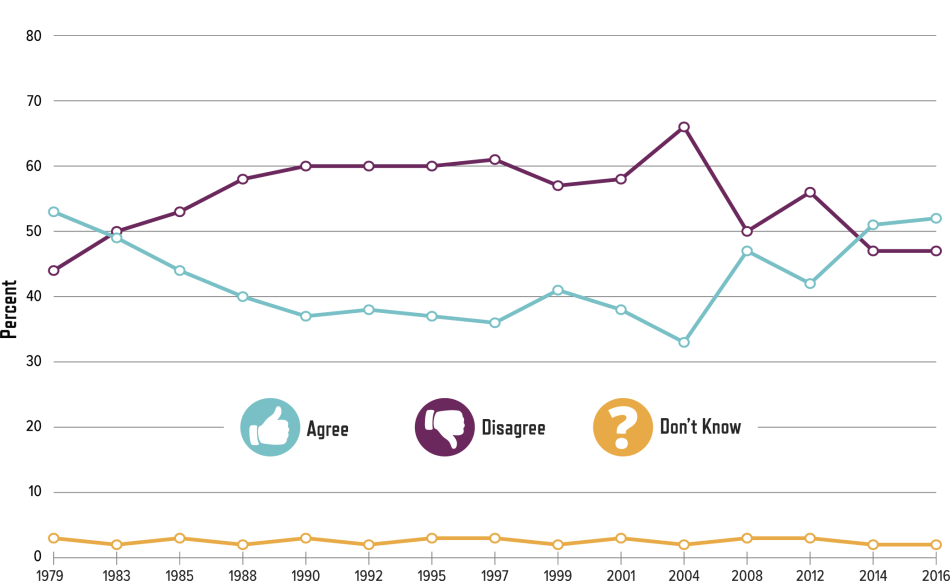 Although U.S. adults generally believe that scientific research is beneficial, other indicators of the perceived impact of science are less conclusive. For more than thirty years, U.S. adults have been asked about the extent to which they agree or disagree with the statement “Science makes our way of life change too fast.” From 1983 to 2012, the majority either disagreed or strongly disagreed with the statement. In 2016, Americans were split on the sentiment, with 52 percent agreeing and 47 percent disagreeing.

A caveat for interpreting these results is the potential for acquiescence bias, a phenomenon in which respondents tend to agree with the questioner when they are uncertain about the answer.

Research into how people interpret the word “science” during surveys would be helpful for understanding the results of such studies (see Defining “Science” on page 3).

A majority of the public supports federal funding of basic science research and investments in engineering and technology. Support for research funding has been relatively steady over the last two decades (data not shown).3 In a 2017 Research!America survey, 79 percent of respondents thought research investment was either “very important” or “somewhat important” for job creation, technological breakthroughs, and economic growth (data not shown).4

Despite a recent uptick in Americans who would like to see federal funding for scientific research increase, about half of Americans say funding should be kept the same or decreased. Recent research suggests that people become more supportive of increases in funding when misconceptions of the current funding levels in relation to the overall budget are corrected.5

Percentage of Respondents Who Consider These Outcomes of Scientific Research to be an “Urgent Priority”: 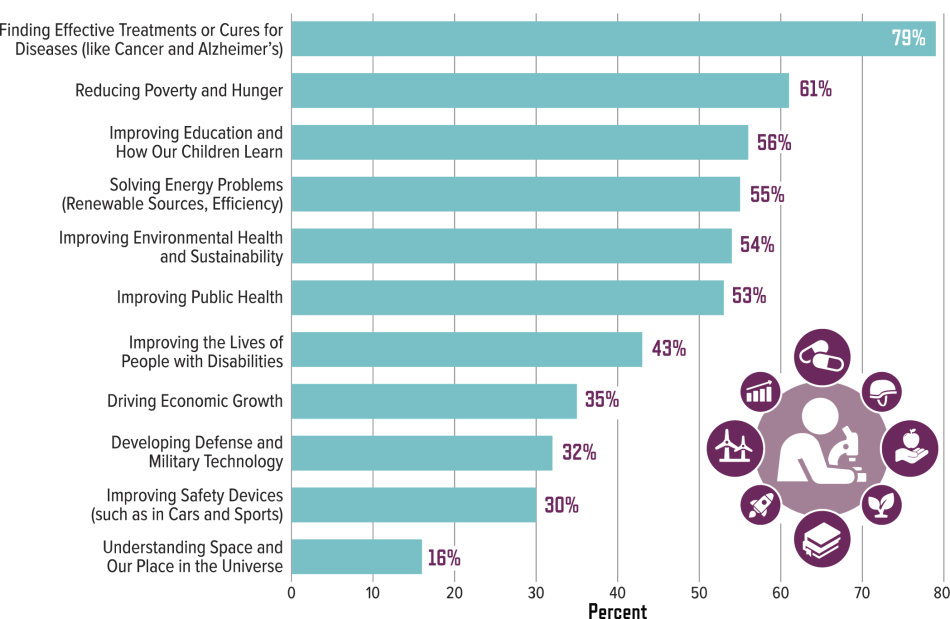 Americans generally recognize science as a critical contributor to solving societal issues. In an exploratory survey commissioned by ScienceCounts, respondents were asked to rate several potential outcomes of scientific research as “urgent,” “important but not urgent,” “not important at this time,” or “not sure.” More than 60 percent of respondents considered each of the indicated research outcomes to be “urgent” or “important” (data not shown). While more studies will be needed to confirm and extend the results of this market research survey, they illuminate potential differences in how individuals perceive different scientific outcomes. For example, although climate change is a politically polarizing issue (see Section 3), approximately 55 percent of respondents considered “solving energy problems” and “improving environmental health and sustainability” to be “urgent” priorities. 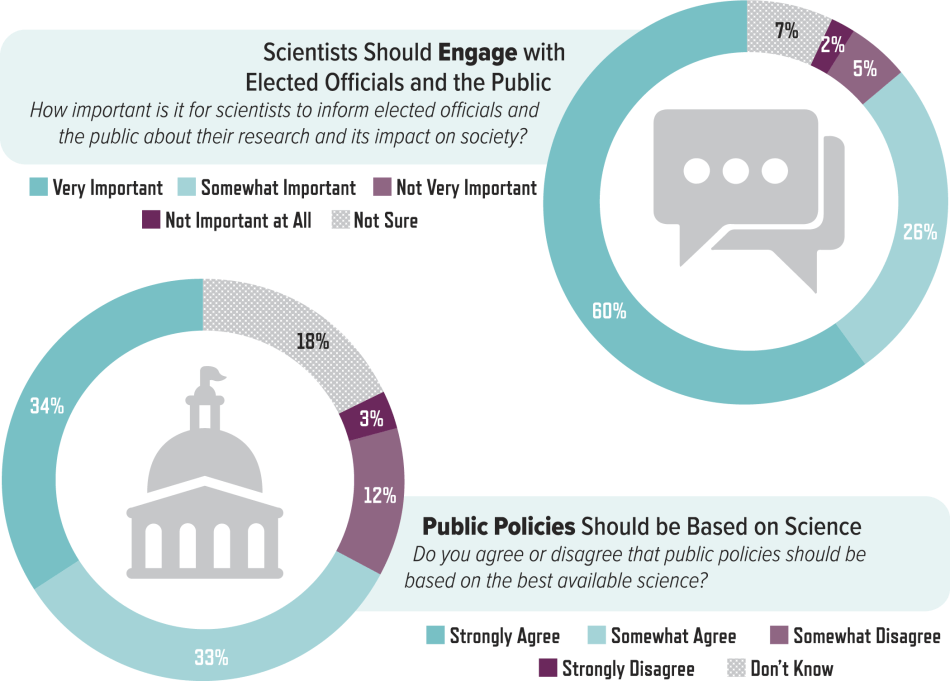 Polling suggests relatively high confidence in scientists and awareness of the societal benefits of scientific research. But does this confidence translate to support for scientist engagement or science in policy? In a 2017 Research!America market research survey, 67 percent of respondents indicated that they “strongly agree” or “somewhat agree” that public policies should be based on the best available science. Another 2017 Research!America survey found that 86 percent of respondents agreed that it is either “very” or “somewhat” important for scientists to inform elected officials and the public about their research and its impact. The number of respondents who think engagement is “very important” increased 9 percent from a 2015 survey (to 60 percent), although this shift corresponded with a 7 percent decrease in those who consider engagement “somewhat important” (26 percent).6

Scientists Should Play a Major Role in Shaping Public Policy

Scientists Should Play a Major Role in Shaping Policy for . . . 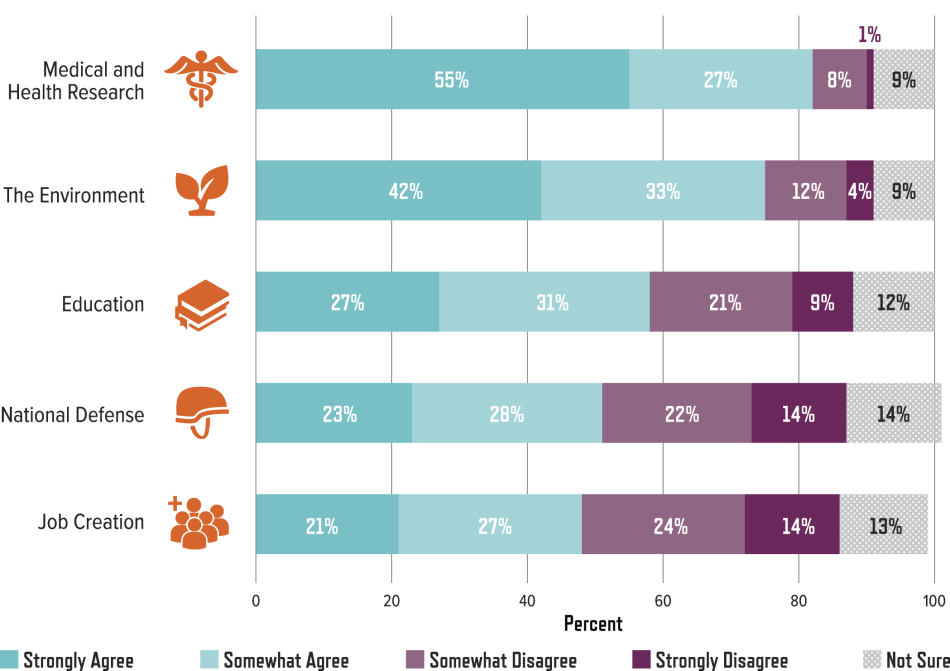 Views on scientists’ role in shaping policy vary based on the issue. While 82 percent of respondents to a Research!America market research survey agreed that scientists should help shape medical and health research policy, fewer support scientist participation in job creation and national defense policy. This gap aligns with the prioritization of research to find disease cures rather than drive economic growth or develop military technology (page 9). Likewise, Pew Research Center studies show that 73 percent of Americans say medical scientists should have a major role in childhood vaccine policy7 and 67 percent say climate scientists should be involved with global climate change policy.8 More research is necessary into how a person’s understanding of science’s role in policy affects his or her perceptions.

Data on perceptions of science reveal robust, long-term support for the leaders of scientific institutions, federal science funding, the use of scientific evidence to inform policy, and an active role for scientists in advising policy-makers. Although the scientific community continues to enjoy broad support, surveys also suggest the potential for specific questions to provoke different reactions. To understand the nature of these reactions, additional research and surveys are needed on people’s understanding of the scientific process and the government’s role in funding science. Insights from these research considerations would allow scientists, science communicators, and science advocates to develop targeted strategies for maintaining or increasing public support for science.

Contextualizing Trust in Science and Scientists

Trust in scientists tends to be higher when people consider general metrics, such as trust in scientists to “tell the truth,” compared with particular scenarios, like trusting scientists to report findings that “go against the sponsor of the research” (pages 4–5). Similarly, when people are surveyed on specific impacts, such as a changing way of life, the responses are mixed (page 7). To better understand these responses, additional research should consider:

Some of these questions could be answered through the administration of new and more nuanced surveys, while others will require partnerships between public opinion researchers and social scientists. A finer distinction among different groups and contexts would also be beneficial.

An expanded understanding of the interplay of factors that shape trust in science may identify areas of weakness that require greater attention from the scientific community. Moreover, these insights may inform science communication efforts to counteract any potential erosion of trust. Expanded polling and research also will be important for addressing emerging scientific questions that have policy implications. For instance, understanding trust in technology companies and their researchers is an important context for understanding attitudes toward innovations such as artificial intelligence and the many emerging regulatory and policy issues related to privacy and security.

A majority of the public believes that scientists should inform elected officials about their work and that federal support for basic research pays off in the long run (pages 8 and 10). However, data also show that support for incorporating science into policy varies by issue. The available polling data do not reveal whether people accurately understand how science is funded and how it can inform public policy, nor is it clear to what extent this understanding, or lack thereof, shapes an individual’s attitudes. To better comprehend public support and improve science advocacy, future research on the subject should consider:

Research on these questions would provide insight into the potential causes of negative perceptions, such as whether misperceptions of the role of public funding influence the desire to maintain or decrease funding for research. Such research would also contribute to an expanded definition of science literacy (see Reexamining the Deficit Model on page 3).

Moreover, when conducting these studies, it will be important to consider how external factors, such as the state of the economy, may shift support for science funding.

To help craft effective research questions on public policy, researchers will need to work with experts familiar with the use of science in policy.

Due to the expansive nature of these science funding and policy questions, researchers should identify and focus on the areas in which an improved understanding would have the highest impact. For example, the data indicate less support for scientist engagement in job creation and national defense policy than in medical and health research (page 11). The results of these studies could help guide efforts to advocate for greater support in these areas.

Project
The Public Face of Science
Share
Previous Section
Introduction
Next Section
Section 2: Demographic Influences on General Views of Science
Back to table of contents