Confidence in Scientific Leaders Varies Based on Demographics and Other Factors

Percentage of U.S. Adults with a “Great Deal” of or “Only Some” Confidence in the Leaders of the Scientific Community: 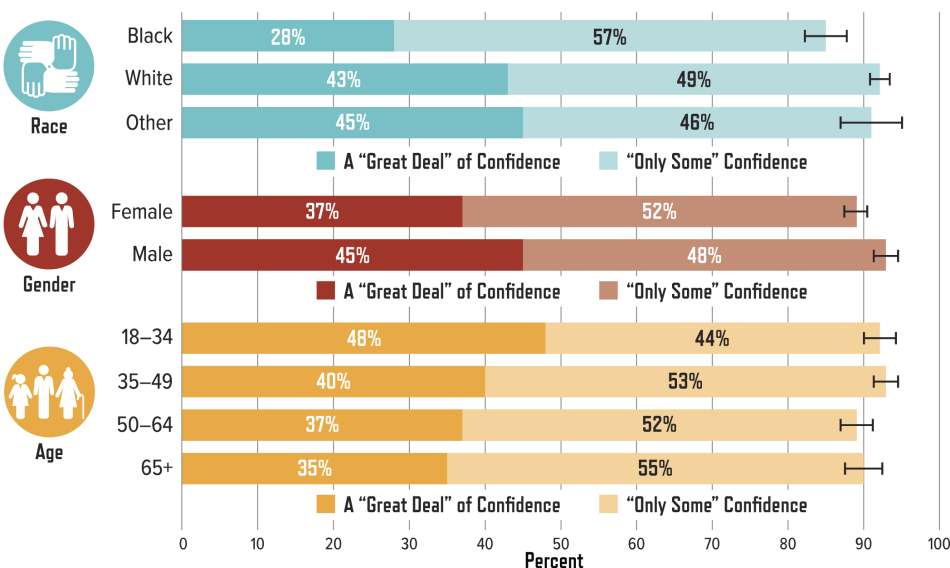 Source: NORC at the University of Chicago, General Social Survey (2016). Race was self-identified through the question, “What race do you consider yourself?” Race categories are as reported by NORC; “Other” includes all respondents, including Hispanics, who did not self-identify as “Black” or “White.” The black bar signifies standard error.

Overall, 90 percent of Americans express either a “great deal” or “only some” confidence in scientific leaders; this number does not significantly vary among various demographic groups. In contrast, black and female adults are less likely to report a “great deal” of confidence in scientists, while younger Americans are more likely to. Black and female adults did not report comparatively lower trust in other institutions, such as education and banks/financial institutions (data not shown).1

GSS data show that the gap between black Americans and other groups was narrower at certain points, such as the late 1980s and 2010. One recent analysis determined that inequitable educational experiences account for approximately one-third of the difference in trust.2 Other cultural elements, including religious beliefs, accounted for most, but not all, of the remaining gap. More research is needed to understand the influence of additional factors, such as the historical relationship between science and race.

Percentage of U.S. Adults with a “Great Deal” of or “Only Some” Confidence in the Leaders of the Scientific Community (continued): 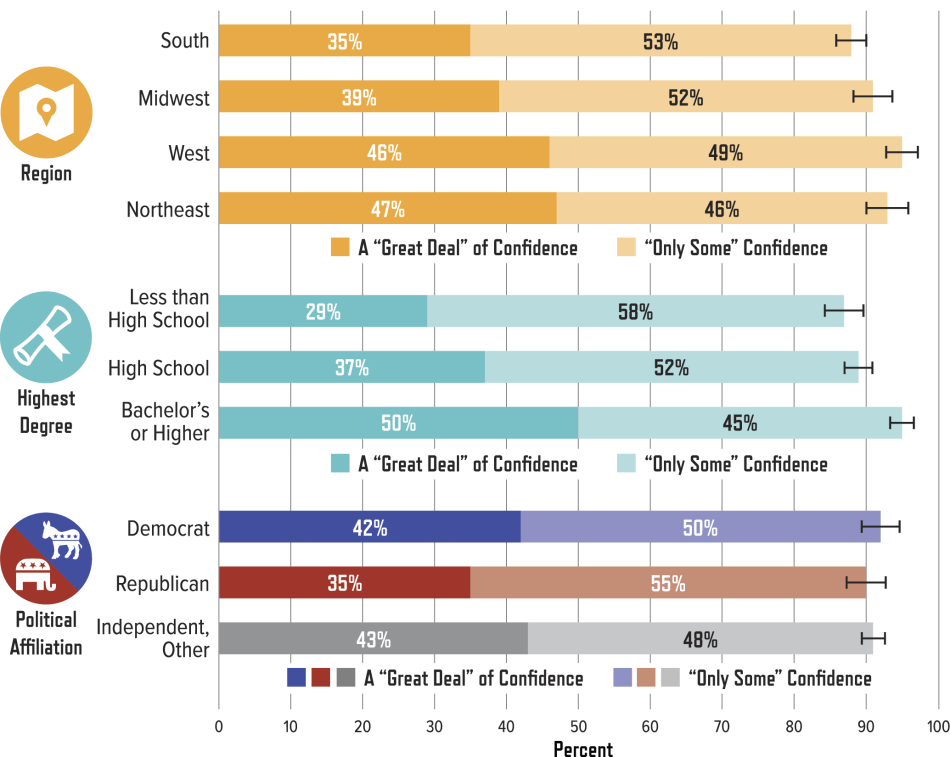 The 2016 GSS data also reveal that while 50 percent of college-educated adults have a “great deal” of confidence in scientific leaders, only 29 percent of respondents without a high-school diploma expressed this level of confidence. The positive relationship between education and trust is reversed for other institutions: people with higher educational attainment are less likely to have confidence in the military and education (data not shown).3

Percentage of People Who Say that the Benefits of Scientific Research Outweigh the Harmful Results, by Educational Level: 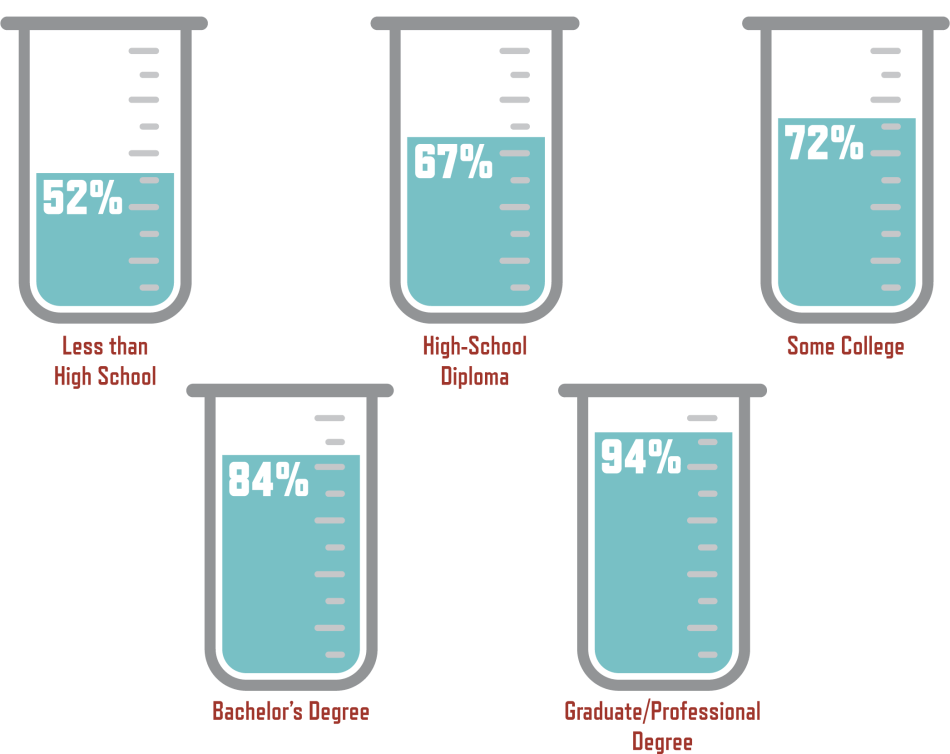 The NSB assessment of whether U.S. adults believe the benefits of scientific research either strongly or slightly outweigh the harmful results reveals a similar divide by education level. The 2016 data show that although 72 percent of the overall population agrees the benefits outweigh the harms, only 52 percent of people without a high-school diploma agree. Similar trends are observed with increasing family income, science knowledge, and age (although there is a dip in this perception among those 65 and older).

Percentage of People Who Agree that Science Makes Life Change Too Fast, by Education Level: 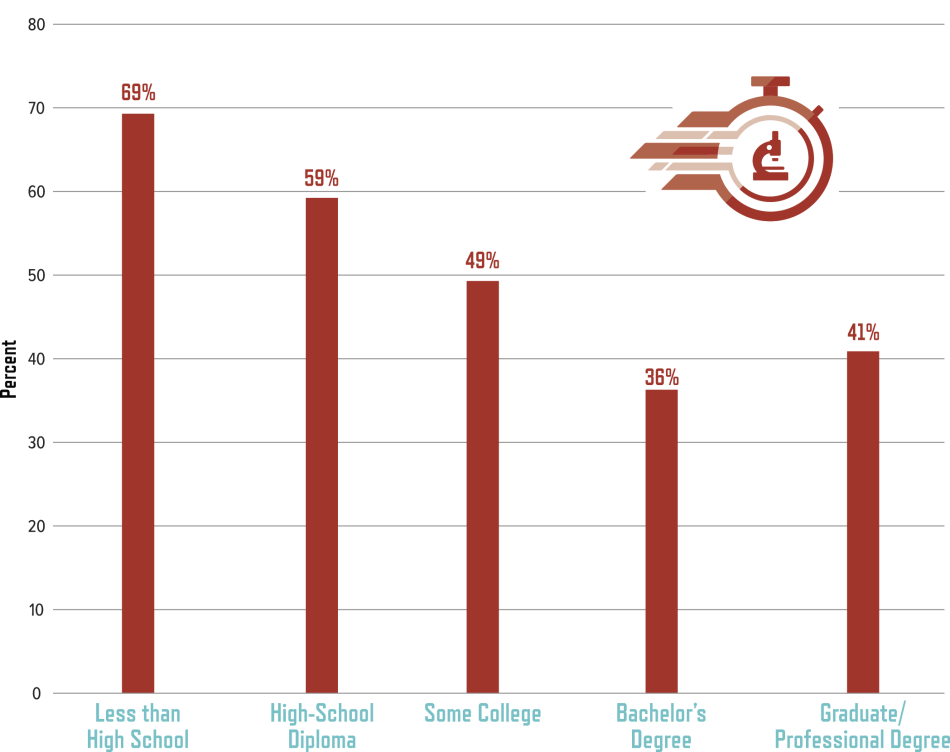 People were also asked about the extent to which they agree or disagree with the statement “Science makes our way of life change too fast.” For the approximately 10 percent of Americans who did not complete high school, the vast majority (69 percent) agreed that science makes life change too fast.4 In comparison, 36 percent of those with a bachelor’s degree expressed this sentiment. Consistent with the strong correlation between education and income in the United States,5 respondents with lower family income also were more likely to agree with the statement (data not shown).

Trust in Scientists Varies Based on Education and Politics

Percentage of U.S. Adults Who Say They Have Confidence in Scientists to Act in the  Best Interests of the Public, by Political Affiliation: 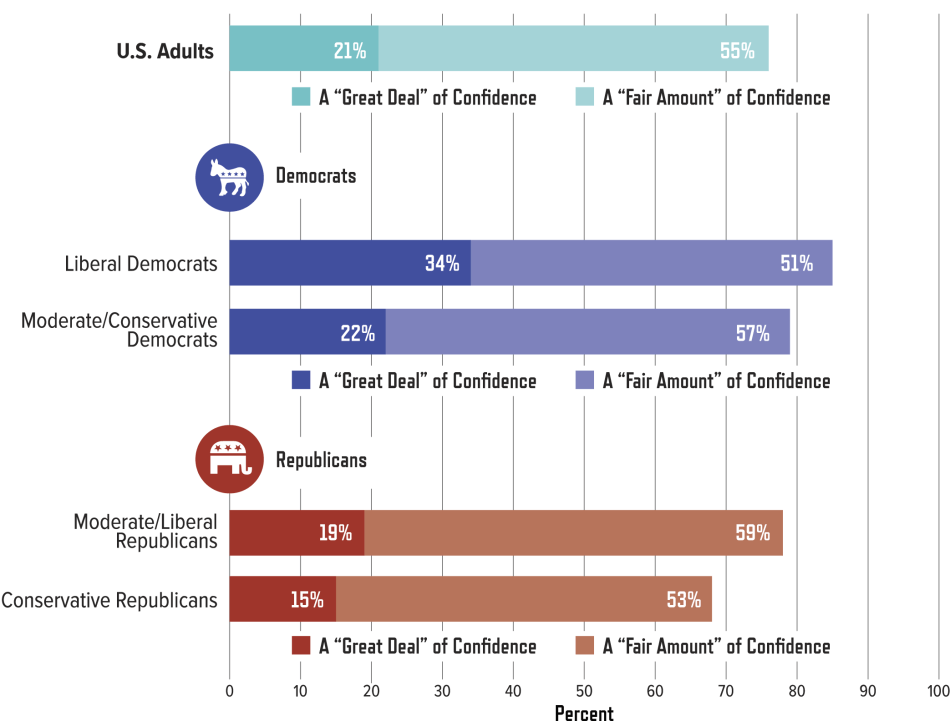 A majority of both Democrats and Republicans express some degree of confidence in the scientific community. But a 2016 study from the Pew Research Center found that 34 percent of liberal Democrats expressed a “great deal” of confidence in the scientific community, while only 15 percent of conservative Republicans did the same. Studies suggest that skepticism among conservatives may originate from concerns with the relationship between science and government.6

Political/Educational Breakdown of People Who Place a “Great Deal” of or “Some” Trust in Scientists to:

Political/Educational Breakdown of People Who Consider These Outcomes of Scientific Research to be an “Urgent Priority”:

A recent exploratory market research survey from ScienceCounts included several questions to assess general public perceptions of scientists and priorities for public funding of scientific research (see pages 5 and 9). The survey examined answers based on political ideology and education level. Liberal respondents with a college degree or more placed the highest amount of trust in scientists in different scenarios—such as reporting their findings accurately—although trust among all groups still remained relatively high. Conservatives tended to cluster together in their responses despite their educational background, while the responses from liberals were more varied.

Viewing perceptions of science through a demographic lens highlights the need to consider the audience when communicating science. The data support the perception that there is not one general “public” but rather many publics who consume information based on a range of underlying factors. Moreover, social science research suggests that characterizing attitudes solely through a demographic framework provides a limited explanation of the mechanisms that inform an individual’s perspective. How people think about science varies in important ways among and within groups. In addition, while most demographic indicators are either static or subject to small shifts, perceptions change over time. A sizeable fraction of the public likely does not have strong, set attitudes about science.

Examining the Underlying Influences on Trust and Perception

People of different races, education levels, and political ideologies have differing levels of confidence in the scientific community, but the causes are unclear (pages 14–15). Moreover, there is a limited understanding of shared factors between groups and the governing influences behind perception. Additional research on this topic should consider the following questions:

When assessing the influence of individuals’ experiences and worldviews on attitudes toward science, social scientists have the task of establishing a consensus on how to define fundamental terms such as “values” and “perceptions.” There is also a need for targeted research on how specific values influence specific perceptions. In line with the questions contextualizing trust in Section 1, understanding the underlying factors that shape trust in science will help strengthen science communication efforts. More-extensive collaborations between social scientists and science communicators could improve the application of these concepts to communication strategies.

Social scientists should specifically consider how perceptions of science are influenced by group identities based on gender, race, religion, political ideology, and other factors. Historical case studies could be useful for providing insights on this topic. When considering questions of group identity, it will be necessary to consider how the definitions of the subgroups and the scientific field in question can influence the quality and interpretation of these data. It is also important not to treat these groups as monolithic, since perceptions of science may vary even among those sharing a particular group identity.