There is No Single Anti-Science Population . . . But More Research is Needed to Understand Why

Sections 1 and 2 present data on general trust in scientists and the perception of science among select demographics. This section of the report explores trust on three topics that have generated controversy in public discourse despite clear consensus among scientists: vaccines, genetically modified foods, and climate change. Although such controversy arises from only a small minority of scientific issues, it threatens to undermine confidence in scientific research and diminish society’s capacity to develop appropriate public policy.

A July 2015 report from the Pew Research Center, Americans, Politics and Science Issues, used multivariate analysis to determine the characteristics that associate independently with opinions for or against the scientific consensus on these three issues, among others (see figure below). For example, older adults are significantly more likely to agree with the scientific consensus that vaccines are generally safe for healthy children. And Americans with either a postgraduate education or greater general science knowledge agree most strongly with the scientific consensus that genetically modified foods are safe to consume, with weaker correlations with gender and race or ethnicity. Notably, of these three topics, only for climate change do political ideology and party affiliation correlate strongly with acceptance or rejection of the scientific consensus, with conservatives and Republicans being more likely to reject the consensus that the Earth is warming due to human activity.

This figure does not identify how a particular characteristic correlates with views of the science; indeed, a given demographic group may report greater acceptance on some issues and less acceptance on others. For example, younger respondents are more likely than older respondents to agree with scientific findings on the cause of climate change but less likely to view childhood vaccines as safe.

The relationship between race or ethnicity and agreement with the scientific consensus also varies for each of these three issues. Black and Hispanic Americans are less likely to say vaccines are safe compared with non-Hispanic whites, but Hispanics are more likely to say the Earth is warming due to human activity compared with non-Hispanics of any race.

Subsequent reports from the Pew Research Center provided more details on how these characteristics are associated with public understanding of the scientific consensus on each of these three critical issues. The following case studies draw on data from those reports to illustrate the complexities of public opinion on these topics and highlight the need and potential avenues for additional research.

Degree of Trust in Medical Scientists to Provide Full and Accurate Information on the MMR Vaccine, by Age of Respondent:

A 2017 Pew report found no statistical difference in the extent to which younger and older Americans trust medical scientists to provide accurate information about the safety of the MMR (mumps, measles, and rubella) vaccine, yet younger people expressed more skepticism of the scientific consensus that childhood vaccines are in fact safe. Researchers do not yet understand this discrepancy, since these data do not reveal respondents’ justifications for their beliefs. For instance, researchers do not know whether the differences in views are related to the shared generational experiences of a given age group, a change in perception associated with the process of aging, lack of personal experience with vaccine-preventative diseases, or some other factor or combination of factors. More research is necessary to determine the underlying causative relationships between population demographics and views on vaccine safety.

Degree of Trust in Scientists to Provide Full and Accurate Information on the Health Effects of GM Foods, by Science Knowledge of Respondent:

Perceived Frequency that Research Findings about GM Foods are Influenced by the Best Available Evidence, by Science Knowledge of Respondent:

The Pew Research Center has also examined perceptions of genetically modified foods and found that only 42 percent of U.S. adults believe that most scientists agree that it is safe to consume genetically modified (GM) foods (data not shown). The perception that scientists have deemed GM foods safe to eat increases to 64 percent when only those with high science knowledge are considered (versus only 28 percent with low science knowledge).

Pew assesses science knowledge through a nine-question index on the life sciences, Earth sciences, numeracy, and the scientific method. U.S. adults who answered at least seven questions correctly are categorized as having high science knowledge; these individuals were also more likely to trust scientists to provide full and accurate information on genetically modified foods and to base their research findings on the best available evidence. However, people with low science knowledge were slightly less likely to say that research findings are influenced by scientists’ desire to help their industries. Further research is required to understand the influence of science knowledge on perceptions toward GM foods and trust in scientists on this issue. In addition to food safety, future studies should also investigate public perceptions of GM foods’ effects on the environment and related ethical concerns.

Degree of Trust in Climate Scientists to Provide Full and Accurate Information about the Causes of Climate Change, by Political Affiliation of Respondent:

Perceived Frequency that Climate Change Research Findings are Influenced by the Best Available Scientific Evidence, by Political Affiliation of Respondent:

When the Kyoto Protocol to the United Nations Framework Convention on Climate Change was adopted in 1997, a roughly equal proportion of Democrats and Republicans (46 and 47 percent, respectively) believed that the effects of global warming had already begun.1 Since that time, however, a well-established link has emerged between conservative ideology and skepticism that global warming is caused by human activity. This skepticism also extends to a lower level of trust in climate scientists among conservative Republicans. The Research Highlight on the next page provides insight into the relationship between political polarization, science knowledge, and views of climate science.

A significant majority of scientific research is noncontroversial. For the particular issues in which public attitudes deviate from the scientific consensus, more research is needed on the underlying influences behind these attitudes. Insights from these studies can be used to anticipate future areas of concern and develop effective communication strategies.

The case studies presented in this report highlight the complex nature of public attitudes on controversial issues. Ongoing research in this field should be supported and expanded. Further research on the views associated with specific science issues should consider the following questions:

Moreover, longitudinal studies are necessary to account for the potential fluidity of group-identity associations with a specific issue. Ultimately, pilot programs that explore new approaches to communicating science on controversial issues need to be developed in conjunction with strategies seeking to improve the overall practice of science communication.

The public opinion data in this section reveal a high degree of divergence on climate science between liberal Democrats and conservative Republicans. Perhaps counterintuitively, recent research suggests that this political polarization is particularly severe among those with higher educational attainment, science education, or science literacy.1 However, this phenomenon is limited only to a few areas of science; others, such as genetically modified foods, exhibit no such association.2 Moreover, recent research suggests that conservative Republicans with a higher curiosity about science “for personal pleasure” are more likely to agree with the science of climate change.3 Such insights demonstrate the value of additional research into the underlying factors that inform group identity, as well as the potential efficacy of various evidence-based communication strategies.

There is “Solid Evidence” of Recent Global Warming Due “Mostly” to “Human Activity such as Burning Fossil Fuels.” 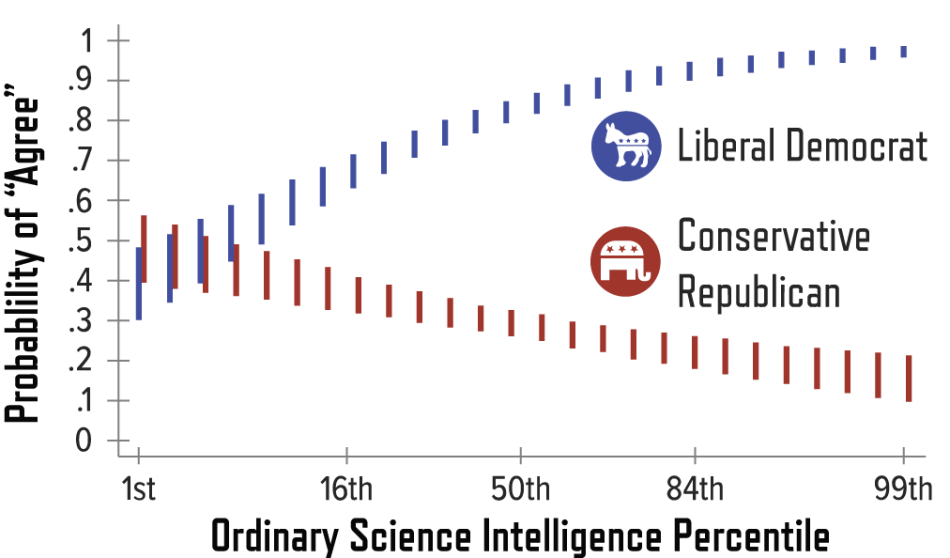 Project
The Public Face of Science
Share
Previous Section
Section 2: Demographic Influences on General Views of Science
Next Section
Conclusion
Back to table of contents