The Physics of Space Security: A Reference Manual 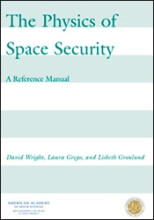 How susceptible are satellites to interference? How easily can they be disabled or destroyed? What measures can be taken to reduce their vulnerability? What are the likely costs and available alternatives to various space weapons proposals?

The answers to these questions depend on physical laws and technical details that are not widely understood outside of a segment of the science and engineering community. At the request of the Academy’s “Rules of Space” project, David Wright, Laura Grego, and Lisbeth Gronlund (Union of Concerned Scientists) prepared a reference manual that makes accessible the necessary facts upon which an informed evaluation of space policy choices can take place.

The paper describes the mechanics of satellite orbits and explains why certain operations are suited to particular orbits. It discusses the requirements for launching satellites into space and maneuvering them once in space. It considers the consequences of the space environment for basing certain military missions there. Finally, it describes the elements of a satellite system and assesses the vulnerability of these components to various types of interference or destruction. It also includes an analysis of technical measures for reducing satellite vulnerability.

The paper provides a foundation for the formulation of sound, science-based policy. It also includes detailed appendices.

Laura Grego is a Staff Scientist in the Global Security Program at the Union of Concerned Scientists (UCS). Before joining UCS, she was a researcher at the Harvard-Smithsonian Center for Astrophysics. She received her Ph.D. in physics from the California Institute of Technology in 1999.

Lisbeth Gronlund is Co-Director and Senior Scientist in the Global Security Program at UCS and a Research Scientist in the Security Studies Program at the Massachusetts Institute of Technology (MIT). Previously, she was an SSRC-MacArthur Foundation Fellow in International Peace and Security at the Center for International Security Studies at the University of Maryland and a postdoctoral fellow at the MIT Defense and Arms Control Studies Program. She is a fellow of the American Physical Society and was a co-recipient of their Joseph A. Burton Forum Award in 2001. Gronlund received her Ph.D. in physics from Cornell University in 1989.

David Wright is Co-Director and Senior Scientist in the Global Security Program at UCS and a Research Scientist in the Security Studies Program at MIT. Prior to coming to UCS, he was an SSRC-MacArthur Foundation Fellow in International Peace and Security at the Center for Science and International Affairs in the Kennedy School of Government at Harvard, and a Senior Analyst at the Federation of American Scientists. He is a fellow of the American Physical Society and was co-recipient of their Joseph A. Burton Forum Award in 2001. Wright received his Ph.D. in physics from Cornell University in 1983, and worked as a research physicist for five years before beginning full-time work on security issues.