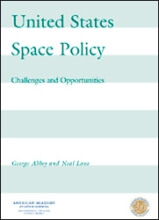 In January 2004, President George W. Bush announced a plan for returning humans to the Moon and eventually flying a manned mission to Mars. The president’s vision was meant to inspire new advances in space exploration. Yet U.S. space policy remains hamstrung by internal contradiction. Space exploration on the scale envisioned in the president’s plan is by necessity a cooperative international venture. Neither the president’s plan nor the prevailing thrust of existing U.S. space policies encourages the type of international partnerships that are needed. Indeed there is much about U.S. space policy and plans—particularly those pertaining to the possible deployment of weapons in space—that even our closest allies find objectionable.

To examine U.S. space policy in greater detail, the Academy called upon George Abbey and Neal Lane (both of Rice University). Their paper identifies challenges and opportunities for the United States space program, paying particular attention to unintended consequences of current space policy, which, as they write, “presents a paradoxical picture of high ambition and diminishing commitment.”

Abbey and Lane identify four barriers to U.S. progress in space science and exploration: the strict regulation of satellite exports as munitions under the State Department rules, a projected shortfall in the science and engineering workforce, unrealistic plans for NASA’s future space missions that neglect the important role of science, and faltering international cooperation on existing and planned space missions. These barriers, according to Abbey and Lane, will have to be overcome if the United States space program is to succeed. They urge the United States to strive for a “balanced program of commerce, science, exploration, national security, and shared international partnerships.”

A European Approach to Space Security

Russian and Chinese Responses to U.S. Military Plans in Space

The Physics of Space Security: A Reference Manual

Report Warns of Challenges to U.S. Leadership in Space; Long-term Commercial and Scientific Edge at Risk