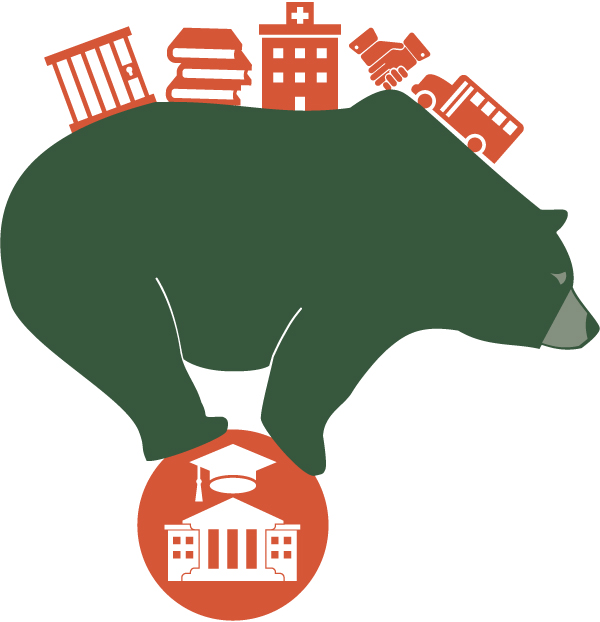 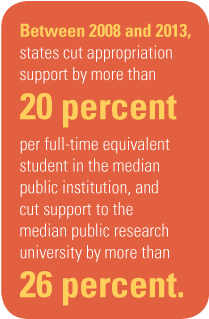 Measured in inflation-adjusted dollars per full-time equivalent (FTE) student, states have been cutting this support for well over a decade, and spending cuts accelerated in response to the Great Recession. Between 2008 and 2013, states cut appropriation support per FTE student in the median public research university by more than 26 percent (overall, support per FTE student at the median public institution was cut by more than 20 percent).

The decline in support in part reflects difficult choices states have made in response to mandatory spending programs like Medicaid, rising pension contributions, and a desire to preserve K–12 education.3

Today, public research universities still rely on state appropriations for approximately 51 percent of their educational revenue, although the percentage fluctuates widely by institution—UCLA, for example, receives only 7 percent of its funding from the state. For most public institutions, further cuts could be devastating.

In this climate, the American Academy of Arts & Sciences created the Lincoln Project: Excellence and Access in Public Higher Education to study the importance of public research universities, analyze economic trends affecting their operations, and recommend new strategies to sustain these critical institutions. In its first publication, Public Research Universities: Why They Matter, the Lincoln Project demonstrated the many ways in which public research universities are a vital public good.4 This publication examines state financing of higher education, describes the challenges that state governments face, and assesses the prospects for greater state support in the future.

1 National Association of State Budget Officers, State Expenditure Report: Examining Fiscal 2012–2014 State Spending (Washington, D.C.: National Association of State Budget Officers, 2015). These numbers are for general fund spending rather than spending from all funds. In many states, higher education spending in other funds includes spending by institutions from tuition revenue and other sources not derived from states’ own resources, and thus does not measure state “effort” to fund higher education. The data in for 2014 are estimates collected before final fiscal reports for the 2014 fiscal year were complete. However, they are not forecasts prepared before the start of the fiscal year, and tend to offer good estimates of actual expenditures. See ibid., 102: “For higher education, states were requested to include expenditures made for capital construction, community colleges, vocational education, law, medical, veterinary, nursing and technical schools, and assistance to private colleges and universities, as well as tuition, fees and student loan programs. Higher education expenditures exclude federal research grants and endowments by universities.” Because the data in are for the general fund, most higher education capital expenditures are excluded.

2 Some reports have calculated different spending shares based upon total expenditures rather than general fund expenditures. Given that our focus is state tax support for higher education, the general fund is more appropriate here.

3 According to the Pew Charitable Trusts (The Pew Charitable Trusts, Fiscal Federalism Initiative, “Federal and State Funding of Higher Education: A Changing Landscape,” June 11, 2015, http://www.pewtrusts.org/en/research-and-analysis/issue-briefs/2015/06/federal-and-state-funding-of-higher-education), federal spending for higher education now exceeds state government spending for higher education slightly, the result of a surge in federal spending after the Great Recession and sharp cutbacks in state spending. The nature of federal spending on higher education is very different from state spending: state funding is primarily for operating support to institutions, while federal spending is mainly for financial assistance to students (such as Pell grants), specific federal research projects, and veterans’ education benefits. In addition, the federal government provides nearly half again as much support for higher education through tax expenditures as it does through direct spending, particularly through the American Opportunity Tax Credit, the successor to the Hope Tax Credit.