Tax revenue, although growing, is growing slowly. States face increases in spending areas that are difficult or impossible to cut, particularly Medicaid and pension contributions. They also face demands for spending on primary and secondary education: a popular priority that does not have its own revenue source (like tuition) and might more easily garner legislative support. In addition, states have made sharp cuts in infrastructure spending and face considerable demand to restore some of that spending, allowing repairs of roads and bridges and improvements in other areas. Thus, higher education, despite its importance to the economy, is continuing to fall behind these other priorities. 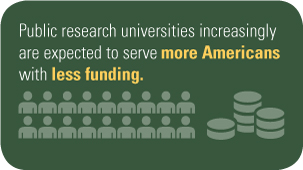 Most universities have instituted new programs to reduce costs, but years of dramatic budget cuts have left little room for austerity: public research universities increasingly are expected to serve more Americans with less funding. In response to this need, the Lincoln Project is developing new strategies for ensuring that public research universities continue to serve the nation as engines of innovation, growth, and opportunity for Americans of all backgrounds.