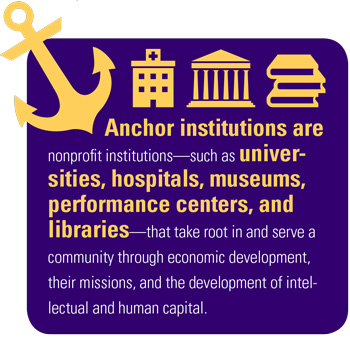 Public research universities are anchors of stability and growth in their regions. As hubs of research and innovation and as cultural institutions—where concerts, plays, public lectures, and political debates take place—they are vital to economic development and the creative economy. Along with other anchor institutions that, once established, tend to remain in their location and support their immediate community, universities work with their counties to drive prosperity. Outside of government, public research universities are often the largest employer in their state.27

Midtown Detroit, for example, is being revitalized by its anchor institutions. Wayne State University, the Henry Ford Health System, and the Detroit Medical Center are working together to make Midtown a safe and vibrant place, while maximizing local hiring and investments. These anchor institutions employ thirty thousand local residents and enroll thirty-two thousand students. Each year they hire thirty-three hundred new employees and purchase $1.7 billion in goods and services.28

Public research universities help meet a critical need for creative goods and services in local economies. One example is Houston, which has a thriving creative economy, estimated at $20.53 billion in a 2012 report. This immense demand for artistic goods and services is met in large part by its anchor institutions. With programs in art theory, architecture, film, theater, dance, and industrial design, the University of Houston is a “training ground” for the creative economic sectors and vital to ensuring that businesses can better meet local demand without having to import talent, goods, and services.29

The University of Nebraska recently created the Nebraska Innovation Campus next to its main campus in Lincoln to promote knowledge transfer.32 The University of Michigan joined a collaboration of the auto, technology, urban planning, and insurance industries and the local government in creating a thirty-two-acre facility on its north campus called Mcity. At Mcity, partnering organizations combine knowledge and resources to test connected and automated vehicles and transportation systems.33

Public research universities also create and operate incubators to serve the local community and stimulate its economy. TechTown, an incubator at Wayne State University in Detroit, served 1,026 companies from 2007 to 2014, raising more than $107.26 million in startup capital and contributing 1,190 jobs to the local economy.34 In a growing national trend, universities are also developing incubators to foster an entrepreneurial ecosystem on campus. The University of Massachusetts, Dartmouth launched its Center for Innovation and Entrepreneurship in 2001. This incubator has hosted 41 companies on campus, more than a dozen of which have since established their own corporate spaces, and has grown the Massachusetts economy by millions of dollars.35

The Institute for Research on Innovation and Science (IRIS), formed in January 2015 at the University of Michigan, is a national collaborative coordinating efforts around the country to measure the impact of university investment. By linking federal award data to university transactions—including spending and payroll records and U.S. Census Bureau data—IRIS allows researchers to track and analyze information on knowledge transfer, economic impact, and job creation. IRIS’s work is already producing significant results, as illustrated in Figures 2 and 3.

Public research university vendor spending from sponsored research projects is surprisingly widespread and illustrates the broad reach of these institutions as hubs of educational, research, and cultural activities. Between the third quarter of 2013 and the second quarter of 2014, the eight Midwestern universities represented in Figure 2 spent over $1.76 billion on goods and services from vendors in 1,750 counties across the United States. These research projects also paid wages to 70,929 research employees during the same period. Slightly more than 16 percent of the people employed on these grants were faculty members. The remaining 84 percent were professional staff, postdoctoral researchers, and undergraduate and graduate students.41

IRIS and U.S. Census Bureau data suggest that funding for academic research is positively linked to personal and national economic growth. Nearly 40 percent of new Ph.D.s from the eight public research universities studied by IRIS took jobs in industry. Many of those positions were at large and high-wage enterprises operating in high-tech and professional service industries that perform R&D and transmit knowledge from research to the marketplace. Engineers, physicists, and computer scientists were also likely to join young firms that directly facilitate economic growth.42

29 “The Creative Economy of Houston: A Comprehensive Study of Creative-Sector Industries and their Impact on the Houston Economy,” commissioned by Houston Arts Alliance and University of Houston in partnership with Greater Houston Partnership, July 2012, http://houstonartsalliance.com/images/uploads/main/Creative_Economy_-_Report_(2012).pdf.