Many public research universities have responded to decreased state funding by increasing tuition. While this solves short-term crises, increasing tuition above ordinary inflation and growth of family incomes is not a sustainable model for public institutions dedicated to serving their states, regions, and nation. Public research universities are working hard to keep tuition increases in check by finding creative ways to reduce expenses and increase revenues in other areas. 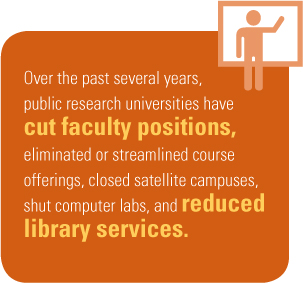 Public research universities have also launched aggressive cost savings plans that include reducing administrative layers, creating joint appointments that share faculty between departments, instituting shared services centers, creating purchasing consortia, and embarking on systems-wide collaborations. For example, the University System of Maryland launched an Effectiveness and Efficiency (E&E) Initiative that yielded $356 million in savings during its first ten years.23 The University of California, Berkeley launched the Operational Excellence Program three years ago and—through procurement-related savings, standardized IT offerings and campus-wide software licenses, and streamlined organizational structure—has achieved more than $63 million in cumulative savings to date.24 Miami University launched the MU–Lean project in 2009, which has since identified over $25 million in savings and new revenues. Other institutions have taken to outsourcing some operations, including management of parking lots, residence halls, and other campus facilities.

Beyond cutting costs, universities are also diversifying their investment portfolio strategies and developing better systems to manage the funds they have. Many institutions are creating comprehensive and detailed financial models that project financial results in the short, medium, and long term in order to execute strategic multiyear planning. Modeling future revenue streams enables universities to establish targets and realistic goals. Even in an environment in which states commit only to a single-year funding cycle, the existence of such modeling can help legislators and governors propose aspirational funding goals.

Universities are also establishing performance metrics with the goal of increasing institutional accountability, while also reflecting institutional variation. For example, public research universities with high graduation rates are reaching out to previously underserved populations. For institutions that have a higher access model (for example, if the state mandates that students from many different qualification levels be admitted) increasing completion rates may be a high priority. Here, one size does not fit all, and universities should avoid introducing counterproductive incentives for funding.

Georgia State University (GSU) provides a dramatic example of organizational efficiency: by creating and implementing a new academic tracking program to improve student outcomes, GSU’s six-year graduation rate has increased from 32 percent in 2003 to 51 percent in 2014 (with no disparities along racial or ethnic lines).25 During the same period, GSU has made a concerted effort to increase enrollment for traditionally underserved students. Remarkably, the share of its students who are eligible for federal Pell Grants nearly doubled, from 31 percent in 2003 to 58 percent in 2013. In this instance, investing in learning analytics and new technologies to improve student learning outcomes paid off with enormous dividends without appreciably increasing the budget. This model is being replicated at other institutions.26

In light of decreasing state investment and increasing tuition, many public research universities have significantly increased their financial aid budgets to maintain access to students from all income levels. As a result, at some public research universities, financial aid is now the largest expenditure after instruction. Financial aid that comes directly from the institution—as opposed to the state, federal government, or a private entity—is often funded by a combination of tuition, fees, endowment funds, and the operating budget. 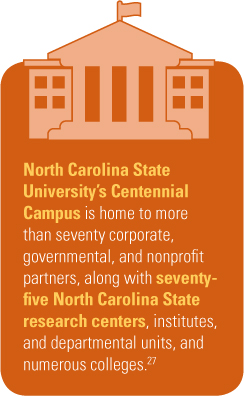 Financial aid can be used to achieve many different institutional goals, such as meeting student financial need, attracting more high-ability students, and enrolling a more diverse student body. It should be noted that while a number of students receive financial aid, many do not. Full-paying students are critical to the bottom line, and allow institutions to enroll students from all socioeconomic backgrounds.

In 2012, the majority (70 percent) of first-time, full-time, in-state students at public research universities received a grant or scholarship, with an average award of $7,844.28 Grant aid from all colleges and universities in the form of discounts to their students grew $23 billion between AY2003 and AY2013, with the most rapid growth in the second half of the decade.29 Between 2009 and 2011 alone, the percentage of tuition and fee ”sticker price“ that is covered by the average institutional grant per FTE student at public colleges and universities increased by about 10 percent.30 At public colleges and universities, the percentage of institutional grant aid meeting undergraduate financial need increased from 29 percent in AY2000 to an estimated 48 percent in AY2013.31 The majority of grants are need-based, with a smaller percentage going to merit and athletic grants and tuition waivers.

Public research universities are striving to offset decreases in state funding and to diversify their revenue streams by increasing their fundraising operations. While a number of public institutions have anticipated the eventual decline in public support and established robust development strategies, many are just now making investments in the infrastructure required and beginning educational campaigns with their alumni about the criticality of donor support. Illustrative of the rapidly changing environment in public university fundraising, of the seventy-
seven institutions that responded to a Lincoln Project survey, 90 percent have recently completed or are in early stages of launching a capital campaign. However, it must be reiterated that most giving is highly restricted—one institution we surveyed estimated that as much as 98 percent of giving is restricted. Endowments are not checking accounts that can be spent at will; rather, donors give to support specific initiatives, and universities have both a legal and ethical obligation to use these gifts to support the activities for which they were given.

In response to rapid and dramatic decreases in state funding, many public research universities—if permitted by state regulation or law—have increased the number of out-of-state or international students to their campuses. Out-of-state and international students play a vital role in creating a more diverse and vibrant student body than would be attained by admitting only in-state students. Beyond bringing tremendous value both in and out of the classroom, these students strengthen the financial base of the university, since these students often pay higher tuition rates. At most public research universities, the out-of-state and international tuition and fee prices are two to five times higher than those for in-state students, and are not offset by state or federal financial aid.

This strategy, while widely employed, represents a ”bridge-funding“ option more than a long-term solution to revenue stream diversification for research universities. Over time, there may be limited opportunities for state universities to continually increase the numbers of out-of-state students. International students, while now flocking to the United States to study at its unparalleled higher education institutions, may become increasingly attracted to universities in their own countries, whose quality is rapidly improving. Additionally, a reliance on external sources of full-paying students can lead to problematic disparities in the socioeconomic profiles of in-state versus out-of-state and international students. Each institution needs to find its own balance of students, while ensuring that enrollment of out-of-state and international students does not come at the expense of fully qualified in-state students.

With the advent of improved learning software, some public research universities are expanding the number of students they serve with online-degree and educational-certificate programs. These initiatives range in their goals, structures, and outcomes. For example, the University of North Carolina now offers an online MBA program (UNC@MBA) that enrolls more than six hundred students from more than thirty countries, with a minimal price differential from on-campus instruction, while Georgia Tech has partnered with Udacity and AT&T to offer an online master’s degree in computer science at a fraction of the cost of the on-campus experience. For some institutions, online education has allowed them to enhance their revenue streams in certain niche areas, though it has not been a panacea.


Alliances with Business and Industry Partners

Universities are becoming more entrepreneurial in nature, opening their doors to collaborations with businesses large and small. As a result of these adaptations, universities are making it easier for students and faculty to start new businesses by improving intellectual-property and technology-transfer policies. Some institutions are building business-accelerator units or new research parks either on or in close proximity to the physical campus. Such parks encourage partnerships with local businesses and corporations and provide great opportunities for internships, joint research, and employment for graduates. North Carolina State University’s Centennial Campus—comprising one thousand acres adjacent to the main campus—has employed these strategies, encouraging university researchers to collaborate with corporate, governmental, and institutional partners on topics of mutual interest. These business partnerships often generate funds that flow back to the university, as well as increase opportunities for students and faculty to apply research in real-world settings.

Project
The Lincoln Project: Excellence and Access in Public Higher Education
Share
Previous Section
Section 2: Changes in Major University Expenses over Time
Next Section
Conclusion
Back to table of contents