Skip to main content
Public Research Universities: Why They Matter

Section 4: Public Research Universities are Working to Maintain and Improve Access and Affordability 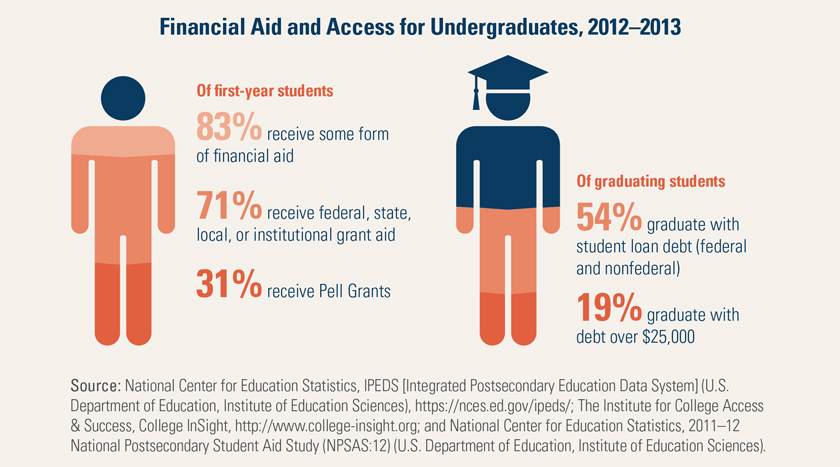 The average price of tuition, room and board, and other on-campus fees at public research universities for in-state students is about $24,000 per year. With financial aid, that amount is reduced on average to about $14,000 per year.30

The number of students at public research universities who receive federal Pell Grants, an indicator of the volume of students from low-income families, has increased by 8 percent over the past five years.31 Many states, university systems, and individual institutions have created their own affordability initiatives that target low- and middle-income students. In California, the UC Blue and Gold Opportunity Plan lowers the cost of tuition to $0 for students from families with household incomes at $80,000 or below.32 The University of Delaware’s Commitment to Delawareans guarantees to meet the full demonstrated financial need of all qualified residents who submit a FAFSA (Free Application for Federal Student Aid); Delaware hopes to ensure that no student will graduate with loans in excess of 25 percent of the cost of a four-year education. Moreover, low-income students at public research universities typically graduate at higher rates than their peers at other public colleges and universities and private for-profit institutions.33 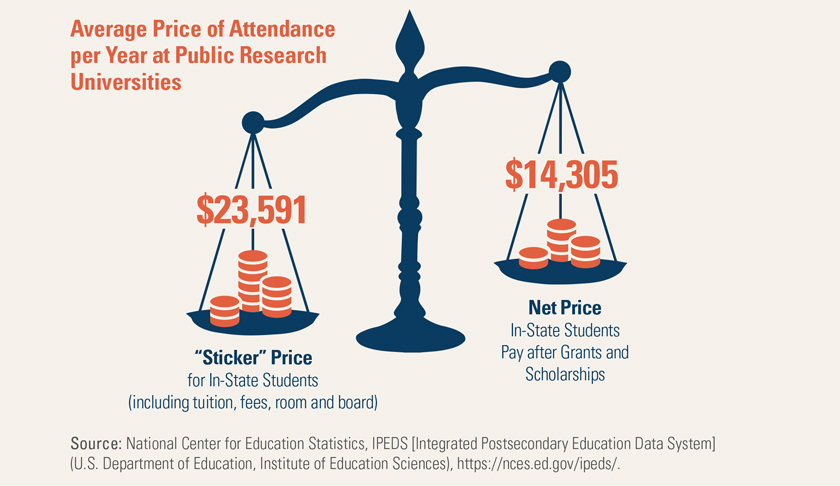 Recognizing that there are different paths to four-year degrees, many institutions also work closely with high school and community colleges to develop dual enrollment, joint admission, automatic admission, and transfer articulation policies (such as 2NAU at Northern Arizona University) that provide students with lower-cost options for transfer and graduation. The Garden State Louis Stokes Alliance for Minority Participation and the Northern New Jersey Bridges to the Baccalaureate programs, for example, are pioneering the development of a streamlined model for community college students to complete their degrees and continue to obtain bachelor’s degrees and beyond.

Tuition at public research universities often covers only one-third of the actual cost of a student’s education.34 Grants, state appropriations, endowment earnings and contributions, and philanthropy subsidize the remaining costs. Thus, as states have reduced higher education appropriations and enrollments have increased, universities have been forced to raise tuition. There has been a direct correlation between the reductions in state support and tuition increases even while taking into account the many cost-cutting measures individual institutions have employed.35

About half (54 percent) of all undergraduates at public research universities take out loans to pay for their bachelor’s degrees.36 Among them, the average debt at graduation is about $25,000, or $6,300 for each year of a four-year degree. Of those students who take out loans, 33 percent borrow less than $10,000 and 70 percent owe less than $25,000 at the time of graduation.37

33 Data from the Beginning Postsecondary Student Data show that students who first enrolled in 2003–2004 and whose income was 100 percent or 150 percent of the poverty level attained their bachelor’s degree by 2008–2009 at a higher rate than similar students from other public institutions and private for-profits. See National Center for Education Statistics, 2003–04 Beginning Postsecondary Students Longitudinal Study, Second Follow-up (BPS:04/09) (U.S. Department of Education, Institute of Education Sciences).