For public school teachers in the U.S., seniority is much more determinative of earnings than subject taught.1 Because precollegiate teaching salaries are so closely tied to years served, public school teacher earnings data from the U.S. Department of Education’s National Teacher and Principal Survey are presented here by career stage, with the earnings of new teachers compared to those of both midcareer teachers and educators with three decades or more of classroom experience. 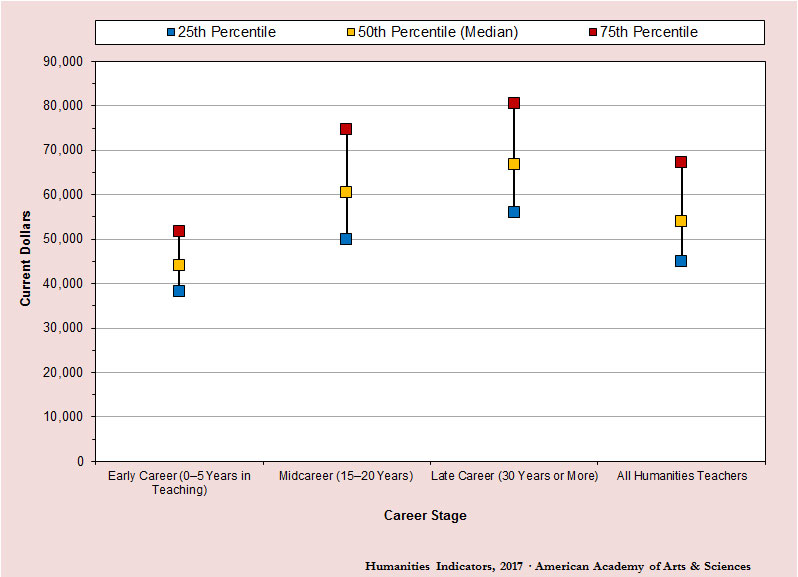 * Includes regular full-time teachers. Earnings include base salary, as well as payment for extracurricular activities and other services provided to the school or larger school system (the latter includes merit pay bonuses, state supplements, etc.).
Source: U.S. Department of Education, National Center for Education Statistics (NCES), National Teacher and Principal Survey, “Public School Teacher Data File,” 2015–16. Data analyzed by NCES staff at the request of the Humanities Indicators (with special thanks to Maura Spiegelman at NCES for her generous assistance). Data presented by the American Academy of Arts and Sciences’ Humanities Indicators (www.humanitiesindicators.org).

The graph displays, for earnings at each career stage, a set of statistics referred to as the interquartile range, which describes the range of “typical” or “usual” characteristics exhibited by a population of persons or objects. Quartiles are statistics that divide the observations of a numeric sample into four groups, each of which contains 25% of the data. The lower, middle, and upper quartiles are computed by ordering the values for a particular variable (in this case teacher earnings) from smallest to largest and then finding the values below which fall 25%, 50%, and 75% of the data. The lower and upper quartiles are the endpoints of the interquartile range. The middle quartile is also known as the median. Personnel included in the humanities teacher count were those whose main teaching assignment was in area or ethnic studies, art history, bilingual education, civics, communication, composition, English, ESL, foreign languages, government, history, language arts, literature or literary criticism, Native American studies, philosophy, or reading. The category “humanities teacher” does not include what the National Teacher and Principal Survey refers to as “general” educators in the elementary and middle grades who spent a portion of their time teaching language arts, reading, history, and other humanities material.