The Humanities Indicators released eight updates on recent trends in humanities degrees this morning, demonstrating continued declines in humanities bachelor’s, master’s, and doctoral degrees in the years before the pandemic. The declines occurred in the U.S. and among the OECD countries generally. The notable exception to this pattern was found at two-year colleges, where the number of degrees awarded in the liberal arts and humanities reached a record high.

One of the key findings in this round of updates is that the decline in humanities degrees appears to be a worldwide phenomenon. 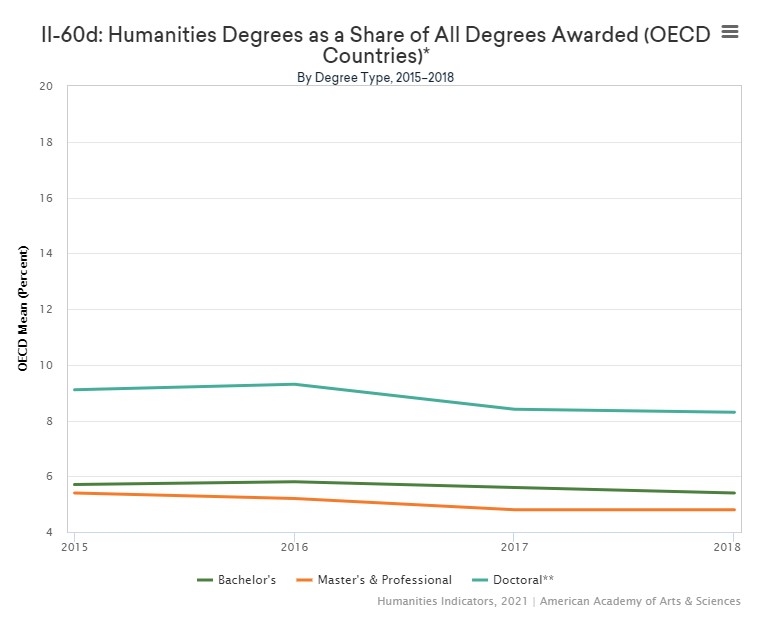 From 2015 to 2018, the average share of all bachelor’s degrees awarded in OECD countries to humanities students shrank 5% (from 5.7% to 5.4%), with just eight of the 35 countries reporting an increase in share. Decline in the humanities’ share of graduate degrees was even more pronounced.

The share of master’s degrees contracted 11% (from 5.4% to 4.8% of the degrees), and the share of doctoral degrees decreased 9% (from 9.1% to 8.3%). (Note: the OECD’s conception of the “humanities” is narrower than that used in other degree tabulations by the Humanities Indicators.)

The United States was below the OECD average as far as the humanities’ share of both bachelor’s and advanced degrees awarded in 2018.

The United States was closest to the OECD average at the bachelor’s degree level. The U.S. share was 5.0%. This was slightly lower than the OECD average of 5.4% and about seven percentage points below countries with the highest shares, Luxembourg and France, which each awarded approximately 12% of their bachelor’s degrees in humanities disciplines.

Trends in the U.S.

The number of associate’s degrees conferred in the liberal arts and humanities (with most of these degrees classified by conferring institutions as “liberal arts” or “liberal studies”) has increased almost every year since 1987, reaching a high of 413,246 degrees in 2018.

The humanities and liberal arts also reached a record high in the share of associate’s degrees awarded, accounting for 43.7% of all associate’s degrees conferred in 2018, compared to 31.7% for the vocational/professional fields and 20.4% in the health, medical, and natural sciences.

In contrast, the humanities’ share of all bachelor’s degrees conferred shrank to the smallest it has been since a complete accounting of degrees in the field became possible in 1987. The humanities’ share in 2018, 10.2% (using the more expansive conception of the field by the Indicators), was less than a third of that for the sciences (health/medical, natural, and behavioral/social sciences combined) and approximately half the share awarded to the business/management field.

The humanities’ share of all master’s and doctoral degrees also reached historic lows in 2018.

Developments in the Humanities Disciplines

In 2018, a student in pursuit of a baccalaureate in the humanities was most likely to complete their degree in communication (excluding the more professionally oriented aspects of the discipline), with such degrees representing more than a quarter of all humanities degrees conferred. The next largest share of degrees, 22%, was conferred in general humanities/liberal studies.

Communication was the only large discipline to experience an increase in the number of bachelor’s degrees conferred from 2012 (the recent zenith as far as humanities bachelor’s conferrals) to 2018. Their number increased by 10%, while English, history, and languages other than English each experienced a decline of at least 25%.

Communication first supplanted English as the discipline granting the largest number of humanities bachelor’s degrees in 2014. By 2018, communication was awarding 35% more degrees than English.

Most disciplines experienced decline from 2012 to 2018 in the number of degrees conferred at both the master’s and doctoral level. A notable exception was culture/ethnic/gender studies, with a 5% increase at the master’s level and 25% growth (from 108 to 135) at the doctoral level.

In 2018, as in 1987, substantially larger shares of advanced degrees were awarded in English than in any other humanities discipline (28.6% at the master’s level and 22.4% at the doctoral). As at the bachelor’s level, however, communication’s share of advanced degrees has grown considerably over the past three decades.