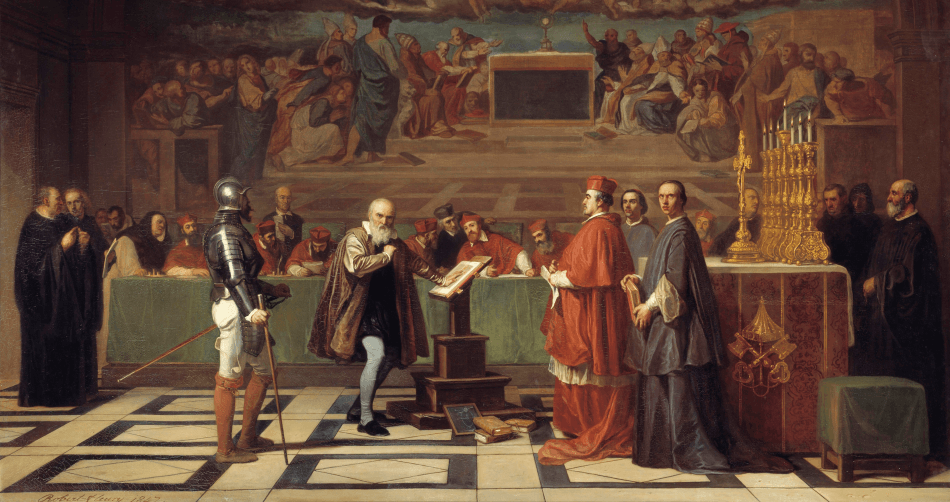 When scientists appear in court today, they are not being prosecuted for their scientific views, but what science tells them may be ignored or, worse, faulty analyses may prove more convincing than sound science. The challenge of getting courts to recognize and accept sound science is still with us. Joseph-Nicolas Robert-Fleury, Galileo before the Holy Office, 1847, Paris, Musée du Luxembourg.

CAMBRIDGE, MA | September 27, 2018 — Science and the law are, in many ways, culturally distinct fields: science withholds judgment until more evidence is accumulated, while the law requires conclusions regardless of the gaps in available evidence. Science seeks empirical truths, while litigants aim to persuade, no matter where the truth lies. As the trial system and the rules of evidence have developed, judges and juries have continued to struggle to make sense of and make use of increasingly complex scientific knowledge and the conflicting opinions presented by expert witnesses. Not surprisingly, what was once accepted in the courtroom as sound science has not always withstood the test of time, but the law–relying heavily on precedent–can be slow to adapt, even when scientific consensus has moved on.

"Science & the Legal System," the Fall 2018 issue of Dædalus, Journal of the American Academy of Arts and Sciences, features thirteen essays on topics including the state of the forensic sciences, expert testimony in court, the role of science in abortion law, neuroscience and law, and reforms to the U.S. adversarial system. The volume also highlights two original first-of-their-kind surveys: on what motivates distinguished scientists and engineers to participate in the legal system–and what their experiences were like–and on the effects of different presentations of fingerprint evidence to juries. Most of the essays are authored by either scientist-lawyer teams or authors who are themselves both scientists and legal scholars, as guest editors Shari Seidman Diamond (Academy Member; Northwestern University Pritzker School of Law; American Bar Foundation) and Richard O. Lempert (Academy Member; University of Michigan) wanted to avoid the silo mentality that has too often created obstacles to discourse between science and the law.

The volume opens with Sheila Jasanoff's (Harvard University) essay, "Science, Common Sense & Judicial Power in U.S. Courts," which addresses a fundamental issue to any discussion of science and law: what determines how scientific claims are received and reinterpreted in a legal context? She argues that judicial common sense, rooted in cultural understandings, forms the lens through which scientific claims are assessed by the courts. The challenge, she notes, is not to make scientists of judges, but rather to reflect on how judges should go about thinking about science and to find ways of encouraging judges to appreciate what science can tell them and see beyond their own common sense. As the editors observe, this task becomes more difficult as ideology affects judgments.

"The Intractability of Inaccurate Eyewitness Identification" by Jed S. Rakoff (Academy Member; United States District Court for the Southern District of New York; Columbia Law School) and Elizabeth F. Loftus (Academy Member; University of California, Irvine) discusses inaccurate eyewitness testimony, the single most common factor contributing to wrongful convictions for serious crimes, including rape and murder. While significant improvements can be made to lineups, photo arrays, and other identification procedures, limitations of human perception, memory, and psychology often raise intractable barriers to accurate eyewitness testimony. Educating jurors to the limitations of eyewitness testimony seems an obvious response, yet research has shown that it may not help jurors discriminate between good and bad eyewitness evidence, but rather may simply create overall skepticism.

More than any other contribution, Jules Lobel (University of Pittsburgh School of Law) and Huda Akil's (University of Michigan) essay, "Law & Neuroscience: The Case of Solitary Confinement," explores an active and changing border between the law and science. Neuroscience, they argue, has the potential to break down the division in the law between psychological harm, which has long been seen as inescapably subjective, and physiological harm. They evaluate the psychological harm caused by prolonged solitary confinement–in extreme cases of prisoners confined for up to twenty-three hours a day for decades–to show how scientific knowledge can further our understanding of and alter our approach to this complex legal issue.

Detailed descriptions of the essays as well as several essays in their entirety are available online. For more information, please contact daedalus@amacad.org.

The Fall 2018 issue of Dædalus on "Science & the Legal System" features the following essays: