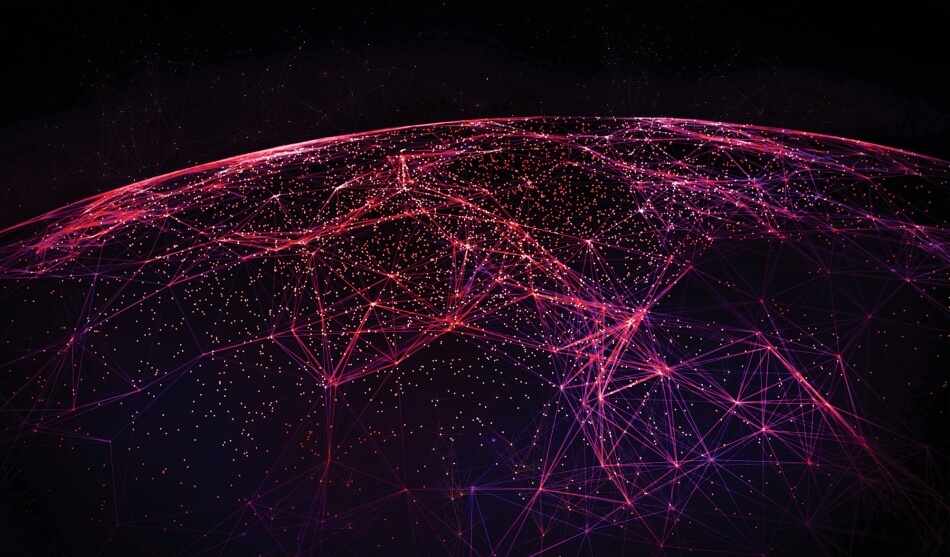 By Rebecca Tiernan, Program Associate for Science, Engineering, and Technology at the Academy

On November 24, 2021, South African scientists alerted the international community of their discovery of a new variant of SARS-CoV-2 that had more than thirty mutations, raising questions about the efficacy of the vaccines that had been deployed.1 Within twenty-four hours, global markets crashed and several countries closed their borders again to travelers from South Africa.2 The international community’s frantic and nationalistic response left the South African researchers feeling punished instead of applauded for alerting the world of the emergence of Omicron.3 Shortly thereafter, scientists determined that Omicron was present in the Netherlands at least ten days before it was identified in South Africa and in individuals with no known travel history or connections to South Africa or to other countries on the African continent where the variant was found.4

The international scientific community condemned the decision to close the borders, citing the failure historically of border restrictions to contain contagious viruses.5 During the COVID-19 pandemic, the border restrictions predominantly hurt the regions suffering the most because high-income countries hoarded life-saving vaccines, preventing access to low- and middle-income countries.6 As one sobering statistic reveals, despite vaccines being available since December 2020, just under 10 percent of Africans were fully vaccinated as of mid-January 2022.7

South Africa’s talented scientists and excellent research facilities, together with a long commitment to scientific research and capacity building, led to the discovery of Omicron. The scientists’ commitment to transparency, openness, and collaboration with other researchers from around the world is allowing the international community to quickly track the spread of the variant and conduct important studies of its pathology and manifestation. This series of events has further underscored that global challenges, like pandemics, cannot be addressed by one nation alone; scientific capacity is essential in all corners of the globe to deal with COVID-19 today and the threats of tomorrow. 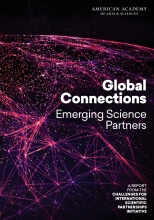 A new Academy report, Global Connections: Emerging Science Partners, issued by the Challenges for International Scientific Partnerships (CISP) initiative, describes the importance of strengthening collaborations between the United States and emerging science partner (ESP) countries. It provides a series of recommendations for both strengthening these partnerships and making them more equitable. The CISP project has also released two other reports: America and the International Future of Science, on the importance of international scientific collaboration at all scales, and Bold Ambition: International Large-Scale Science, on best practices for building large-scale scientific collaborations in the future.

In the development of the Global Connections report, Shirley Malcom (American Association for the Advancement of Science) and Olufunmilayo Olopade (University of Chicago), the chairs of the Emerging Science Partners Working Group, and Arthur Bienenstock (Stanford University) and Peter Michelson (Stanford University), the chairs of the CISP initiative, led an ambitious series of international soundings and workshops with scientists from around the world, including in the regions of Asia and the Pacific, Latin America and the Caribbean, the Middle East and North Africa, and sub-Saharan Africa. Over the course of these discussions, scientists and policy-makers from ESPs shared their priority areas for scientific inquiry and the challenges they have faced in developing and establishing scientific capacity, generally, and in collaborations with the United States, specifically. These insights informed the final imperatives and the mechanisms presented in the report and highlighted important venues for fostering collaboration between the United States and ESPs.

With this broad range of perspectives and ideas in hand, the Emerging Science Partners Working Group synthesized its findings, eventually coalescing around three major recommendations:

Percentage of the Population with COVID-19 Vaccinations, by Region 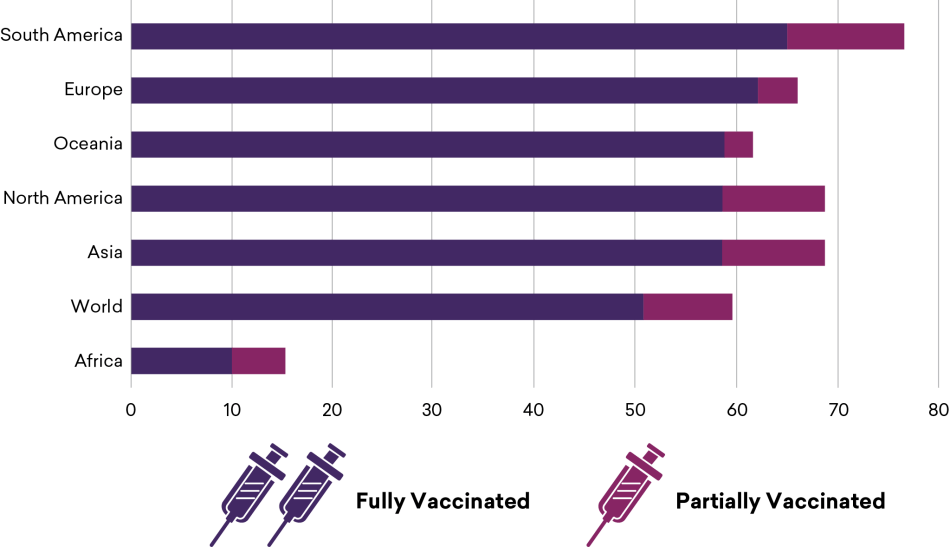 There are rich, thriving scientific venues in which collaborations between the United States and ESPs already occur, including partnerships between scientific agencies, university-to-university collaborations, science academies and scientific society networks, philanthropic and company-supported scientific endeavors, and mission-driven global scientific networks, which bring scientists together from around the world to address pressing questions with global implications. In and between these spaces, there are many opportunities for the United States both to deepen and broaden its engagement with ESPs. To do so, the United States must commit to embedding equity, transparency, and justice in its scientific collaborations through establishing shared goals and values, upholding commitments to high-quality science, agreeing on scientific priorities, and setting mutually beneficial outcomes for all collaborators.

Recognizing the impacts of colonialism, racism, and sexism will be essential for scientists and policy-makers engaging with ESPs, many of which continue to be affected economically and politically by colonial histories. The United States’ own fraught experiences of racism and unethical scientific experimentation on vulnerable groups continues to impact its ability to engage a diverse STEM workforce domestically. Renewed calls for racial justice in the United States following the murder of George Floyd, combined with the disproportionate impacts of COVID-19 on Black, Indigenous, and Hispanic communities, present a unique opportunity for rethinking how STEM fields can be more accessible and how international collaborations with ESPs can be restructured with principles of equity, inclusion, and justice embedded at the forefront.

Global Connections offers a series of mechanisms to the key audiences responsible for supporting the U.S. scientific enterprise that can aid both in strengthening U.S. support for collaborations with ESPs and in embedding principles of equity into these partnerships. As societies globalize and ESPs look to expand scientific capacity as a means of development, the United States must prioritize deepening its engagement with ESPs if it is to remain a leader in science, technology, and innovation for generations to come.

The Challenges for International Scientific Partnerships Initiative is supported with funding from the Alfred P. Sloan, William and Flora Hewlett, and Gordon and Betty Moore Foundations. For more on the project, visit the Academy’s website.