The Global Security and International Affairs program area draws on the expertise of policy-makers, practitioners, and scholars to foster knowledge and inform innovative and more sustainable policies to address crucial issues affecting a global community. Projects underway in this area engage with pressing strategic, development, and moral questions that underpin relations among people, communities, and states worldwide. Each initiative embraces a broad conception of security as the interaction among human, national, and global security imperatives. Project recommendations move beyond the idea of security as the absence of war toward higher aspirations of collective peace, development, and justice.

Meeting the Challenges of the New Nuclear Age, Phase One

The global nuclear order is evolving today along three main dimensions: 1) the nuclear posture of several nuclear weapons states has changed because of the possible use of nuclear weapons in war fighting; 2) technological innovations (in the space and cyber realm in particular, although not exclusively) are impacting existing nuclear arrangements (including the extended deterrence architecture and strategic stability); and 3) the changes in the current global nuclear order affect the prospects for nuclear arms control in a multipolar world.

Phase one of the project will identify the major dangers generated by the dynamics of a multipolar nuclear world–dangers that pose the greatest threat of inadvertent nuclear war; offer alternative approaches to addressing each of these dangers and then facilitate discussions with relevant communities in the United States and abroad; and encourage and assist policy-makers, Congress, the analytical community, and the media to think systematically about a world that is now multipolar. The project has published three research papers that have been shared with diverse audiences, such as domestic and international policy-makers, scholars and students of nuclear affairs, and leaders of international organizations. In Spring 2020, the project will publish an issue of Dædalus, which will be accompanied by an outreach strategy targeting relevant policy-makers and academics.

Meeting the Challenges of the New Nuclear Age is rooted in the critically important work on arms control that the Academy conducted from 1958 to 1960 to prevent a nuclear confrontation between the United States and the Soviet Union. During that time Academy Fellows gathered monthly to build a cooperative framework between the United States and the Soviet Union based on the limitations of the nuclear stockpile and the establishment of mutual vulnerability between the two rivals. The group included Donald Brennan, Edward Teller, Henry Kissinger, and Thomas Schelling, among others.

Meeting the Challenges of the New Nuclear Age: U.S. and Russian Nuclear Concepts, Past and Present
Linton Brooks, Alexei Arbatov, and Francis J. Gavin (American Academy of Arts and Sciences, 2018)

Meeting the Challenges of the New Nuclear Age: Emerging Risks and Declining Norms in the Age of Technological Innovation and Changing
Nuclear Doctrines
Nina Tannenwald and James M. Acton, with an Introduction by Jane Vaynman (American Academy of Arts and Sciences, 2018)

This meeting brought together a group of scholars and current and former policy-makers to examine whether strategic stability is still relevant and viable in a multipolar nuclear world, and its role in the trilateral relationships between the United States, Russia, and China and India, Pakistan, and China.

Contributors to the Dædalus issue on “Meeting the Challenges of the New Nuclear Age” discussed drafts of their essays and identified key themes in the volume.

Authors in the Dædalus issue shared feedback on revised versions of their essays and discussed some of the key ideas from the project that will inform the outreach phase of the project.

Phase two of Meeting the Challenges of the New Nuclear Age will produce an edited volume of innovative and policy-relevant essays on challenges created by the emergence of “new” nuclear weapons states such as North Korea, and potential proliferators, such as Iran, Saudi Arabia, Japan, South Korea, and Turkey, among others. The study will also explore other nuclear weapons states, including India, Pakistan, and Israel. These states are de facto nuclear weapons states but operate outside of any established multilateral nuclear frameworks such as the Nuclear Non-Proliferation Treaty and the Nuclear Suppliers Group. Deterrence and New Nuclear States would investigate deterrence and defense implications facing small nuclear force-countries and potential proliferators. The study will focus more on regional and sub-regional nuclear dynamics that could further destabilize an already undermined nuclear order.

The edited volume will be published by a university press and will be accompanied by outreach activities aimed at nuclear policy-makers (primarily in the United States) and academic centers and think tank institutes with a specific focus on nuclear studies.

Members of the project’s advisory group met to identify some of the key issues concerning deterrence and new nuclear states that will be addressed in the project’s forthcoming edited volume. Topics of discussion included nuclear testing and breakout, strategic stability and credible deterrence, the psychology of deterrence, and nuclear doctrine and international law.

The Global Nuclear Future is an interdisciplinary and multinational project that has engaged nuclear newcomers in conversations on nuclear safety, security, and nonproliferation.

The project has focused its work in three main areas: 1) developing regional networks of knowledge in Southeast Asia and the Middle East that could assist nuclear newcomers and nuclear aspirant countries in establishing a safe, secure, and proliferation-resistant program; 2) identifying the best strategies and policies to manage the nuclear fuel cycle, including the back-end of the nuclear fuel cycle and the transfer and governance of dual-use technology; and 3) articulating possible strategies to minimize the risks of insider threats within nuclear laboratories and power plants. The project has convened nuclear experts and scholars to promote dialogue among regional stakeholders; hosted policy briefings and consultations with government officials and representatives of the nuclear industry; and commissioned papers and publications, often co-authored by regional experts, to enhance academic cooperation and nurture interstate intellectual exchanges.

The project has published fourteen research papers, an edited book, and two issues of Dædalus. Its most recent publications include Governance of Dual-Use Technologies: Theory and Practice; A Worst Practices Guide to Insider Threats: Lessons from Past Mistakes; and The Back-End of the Nuclear Fuel Cycle: An Innovative Storage Concept.

A Worst Practices Guide to Insider Threats: Lessons from Past Mistakes
Matthew Bunn and Scott D. Sagan (American Academy of Arts and Sciences, 2014)

The Civil Wars, Violence, and International Responses project stems from the observation that current multilateral approaches for preventing, mitigating, and resolving civil wars and intrastate violence are often far too ambitious. They frequently overpromise stability, security, peace, democracy, and development to countries experiencing high levels of violence and instability. To identify the main drivers of civil wars and their security spillover effects, the project published two issues of Dædalus (“Civil Wars & Global Disorder: Threats & Opportunities” and “Ending Civil Wars: Constraints & Possibilities”) with contributions from scholars, former diplomats, military experts, and policy-makers. The project identified six threats that emerge from civil wars and intrastate violence: pandemic diseases, transnational terrorism, migration, regional instability, great power conflict, and criminality. The project has engaged in extensive domestic and international outreach to share findings and recommendations that deliver a more comprehensive, effective, and integrated approach to conflict prevention and crisis management, which encompasses security, diplomacy, and development strategies in countries such as Colombia, Nigeria, Ethiopia, Syria, Lebanon, and Sri Lanka, among others. Building on these policy discussions, the project will publish a research paper focused on the policy implications of the project’s findings, which will be distributed to relevant policy-makers in the United States and internationally. 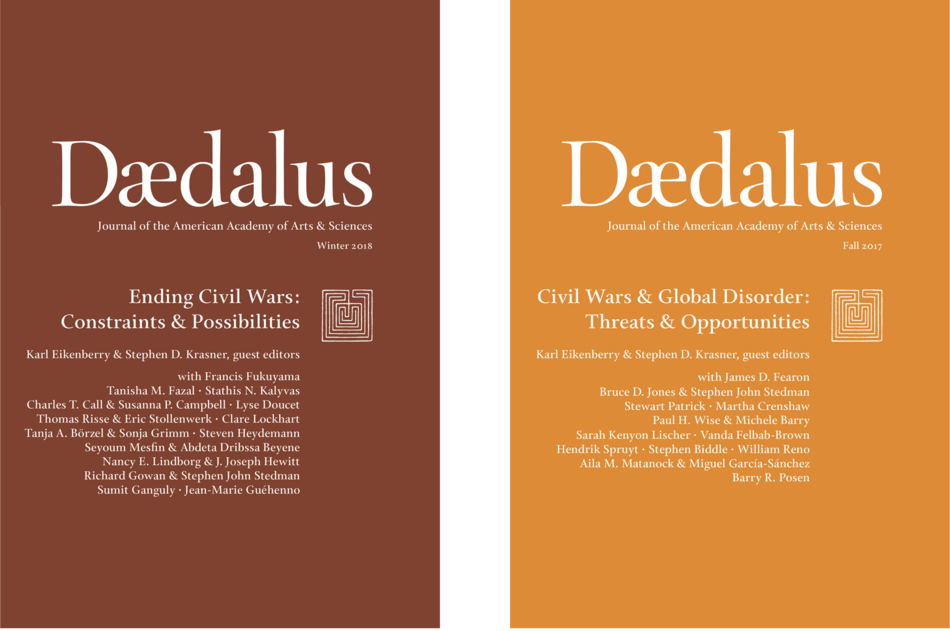 Organized in collaboration with the U.S.–Asia Security Initiative at Stanford University’s Walter H. Shorenstein Asia-Pacific Research Center and the School for International Studies at Peking University, this workshop convened thirty-five experts from China, the United States, Ethiopia, and France to discuss intrastate violence and the limits and possibilities of intervention. Some of the topics that were discussed included the degree to which intrastate violence is rooted in domestic versus international factors, the types of global security threats that such violence creates, and the policy options available to the international community or to regional powers.

Rethinking the Humanitarian Health Response to Violent Conflict seeks to understand and address current trends in humanitarian contexts that pose new or changing challenges for humanitarian health responders, including the increasingly protracted nature of civil and non-international armed conflict, the fact that many of the world’s most violent places are facing criminal or political violence rather than conflict as conventionally understood, shortfalls in funding, and changing geopolitical relations. This project will bring together political scientists, legal and security experts, health professionals, and humanitarians to examine current challenges to effective humanitarian action and to develop, where necessary, new strategies for preventing civilian harm and delivering critical health services in areas plagued by violent conflict.

The initiative will consist of an ongoing engagement strategy designed to involve domestic and international policy-maker, practitioner, and scholarly audiences, including international organizations and nongovernmental organizations, to help define new strategies for the effective provision of essential health services in areas of armed violence. By working with key audiences and organizations from the earliest stages, the project will help ensure that its research findings are directly relevant for key actors in this field.

Throughout this initiative, the Academy will seek opportunities to develop partnerships that will guide a range of specialized outputs tailored for specific audiences. Building on the models successfully used by previous Academy projects, this initiative will carry out its work through a mix of convenings, events, and publications. Primary products of the initiative will include a series of publications, such as peer-reviewed journal articles, white papers, and short policy briefs directed at specific audience segments, as well as a series of meetings involving key scholars, practitioners, and others actively concerned with the humanitarian health response to violence. The project will also generate public-facing blog posts, online videos, podcast episodes, and op-eds to reach not only a general audience but also local and field-based humanitarian health providers who may be beyond the reach of targeted project engagement. These efforts will include partnering with universities in the global South and particularly in conflict-affected countries.

Building on prior small-group consultations with a variety of experts, this exploratory discussion convened scholars, policy-makers, and practitioners from a variety of disciplines to consider how the Academy could make important and pragmatic contributions to the development of more effective humanitarian health responses in areas of violent conflict.

Held in collaboration with the Centre for Global Health Security at Chatham House and the London School of Hygiene and Tropical Medicine, the meeting brought together scholars, practitioners, and policy-makers from the global health, humanitarian, and security sectors to explore how future work by the three hosting organizations could help define new strategies for the provision of essential health services in areas of violent conflict.

Share
Previous Section
Education and the Development of Knowledge
Next Section
The Humanities, Arts, and Culture
Back to table of contents