While state and federal initiatives often offer the most efficient and scalable solutions to the challenge of improved language education, some useful and effective alternatives may not require the full authority and infrastructure of government programs. Language teacher associations play a central role in fostering communication across the teaching profession, supporting research, distributing teaching materials, and providing opportunities for professional development. A variety of international organizations also support the study and teaching of world languages, including Alliance Français, Goethe House, Hanban, International Korean Educators Network, Japan Foundation, Qatar Foundation, and Russkiy Mir Language Center, among others. But very often, schools need look no further than their local communities for new teaching and learning opportunities. Urban schools in particular are surrounded by valuable, untapped resources to enhance language and cultural education for all students: ethnic, immigrant, and Native American communities that conduct everyday business in languages other than English. Districts should experiment and search for ways to bring these language communities into the education system. 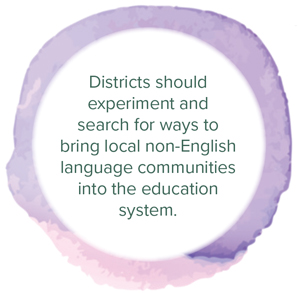 A number of innovative public-private partnerships have already been established in communities around the nation. For example, the Chicago Public Schools system supports a flourishing Arabic language program, guided by the Center for Arabic Language and Culture, that draws on the local Arab-speaking populations as well as support from local and international businesses and the Qatar Foundation International to supplement classroom learning.67 In New York City, the French Heritage Language Program of the FACE Foundation, in partnership with the French Embassy and the International Network for Public Schools, provides free French classes and cultural activities to students from ten city high schools, including immigrant students from French-speaking West Africa and Haiti.68 Typically, such programs—like the more formal heritage schools that have developed over the last few decades—rely on parental contributions as well as private support, in which schools, philanthropists, and businesses pool resources to address the needs of specific locations. Supplementing state-wide curricula, these programs can be responsive to local populations and creative in ways that state-driven programs cannot.

State humanities councils have also been successful in organizing educational activities, publishing books in languages other than English, and generating public excitement about cultural and linguistic diversity. There are fifty-five councils in the United States and its territories, each funded in part by the National Endowment for the Humanities, to promote humanities education and programming. Most sponsor programs that focus on local languages and many place a particular emphasis on the education of young children. Examples of such programs include:

Such programs help establish and enrich local identities. They recognize and honor difference. And they identify and develop the linguistic and cultural resources that help to educate entire communities—resources that are, in many cases, hiding in plain sight.

Municipalities across the nation are beginning to recognize the value of such programs as sources of economic strength as well as the basis of a vibrant culture. For example, as part of a new campaign to attract international trade and investment, the city of Atlanta is now strategizing the development of a “next-generation workforce,” focusing on technical and computer skills as well as “cultural and language immersion programs for students to prepare them for entering the workforce of tomorrow.”72 According to these plans, tomorrow’s workforce needs to be conversant with other cultures, and the city’s future prosperity will be tied to its residents’ ability to communicate in languages other than English. School curricula will have to pay more attention to language and cultural studies to prepare such a workforce, but the state councils and a new generation of public-private partnerships can provide invaluable support.

Eric Sargent earned dual undergraduate and graduate degrees in German and mechanical engineering through the University of Rhode Island’s International Engineering Program (IEP), and completed an overseas traineeship that led to three years of employment with German automotive supplier ZF Friedrichshafen, before securing his current role at BMW. Prior to his IEP experience, he did not anticipate the importance of language study to his career and was not overly excited by the language courses available to him. Today, Sargent liaises between BMW’s American and German offices, speaking in German with leading engineers about both technical and cultural matters daily. He credits his language skills and early experiences abroad for much of his success and considers himself a “global engineer.”

Eric told the IEP that his job “could not be done by someone without fluency in the two languages and an understanding of the differences between the way Germans and Americans behave and function in their daily lives.”73

67. Center for Arabic Language and Culture, “Welcome to CALC,” http://www.calcchicago.org/home.html.