A national strategy to broaden access to language education for every student in the United States, as preparation for life and work in a global twenty-first century, must also promote opportunities for students to travel, experience other cultures, and immerse themselves in languages as they are used in everyday interactions and across all segments of society.

In its Heart of the Matter report, the American Academy’s Commission on the Humanities and Social Sciences wrote: “While foreign language study is a crucial step toward a more productive, reciprocal engagement with other cultures and governments, language study alone cannot provide the cultural and historical context in which such exchanges take place.” For this reason, the Commission recommended that “transnational studies, study abroad, and international exchange programs should be expanded as part of undergraduate education.”87 According to the Institute for International Education, 313,000 students received credit for study abroad programs during the 2014–2015 academic year, and several education associations are calling for that number to double by the end of this decade.88 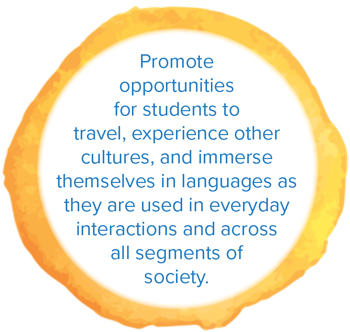 There are now many successful models for study abroad. For example, the Language Flagship model of the National Security Education Program (NSEP-DoD) prepares students at twenty-five American universities to speak, read, and listen in a non-English language at a professional level through intensive training at home and during an overseas capstone year. Similarly, the State Department’s National Security Language Initiative for Youth (NSLI-Y) and Critical Language Scholarship programs support over one thousand students of critical languages in overseas language study annually. Participants in these federal overseas programs come from all socioeconomic backgrounds and include students who have never before left the United States or studied the language in question. These programs prove that most students can successfully learn a language, given proper instruction and adequate support.90 The Departments of State and Defense should expand these successful immersion models, which are creating access for students to languages critical for U.S. national security and global competetiveness.

Many colleges and universities now offer opportunities for international study as well. However, these programs can be expensive—in real dollars, in forfeited income during the period abroad, and in time spent away from home campuses and coursework—and are therefore less accessible to students from disadvantaged backgrounds. Campuses should make every effort to ensure that such students have access and support for overseas coursework—in part by recognizing overseas coursework for either elective or major credit. This recognition would enable students to apply financial aid and student loans to their time abroad, just as they apply it to their home campus studies.91 Unfortunately, even this recognition would not help students who wish to travel during the summer months (a more convenient time for many disadvantaged students) since, under current regulations, federal aid cannot be used to support summer study. The Department of Education should consider restructuring federal financial aid to help low-income undergraduates enjoy study abroad during the summer, as well as the academic year, to obtain language competence in their specific area of study.

But academia and government are not the only potential partners in this effort. Indeed, American businesses may have the most to gain from a workforce that is competent in world languages and effective in international settings. Eighty-eight percent of the executives who responded to the 2014 Coalition for International Education sponsored study reported that international sales will be an equal or greater percentage of their business in the future, and almost two-thirds report a need for international skills at entry and management levels.93 In other words, the United States is rapidly approaching a significant skills gap. Many businesses recognize and address this need by providing language education for their employees through a variety of means, including internal training programs and sponsored coursework. Community colleges have also become important partners by providing effective and affordable language instruction for adults. In addition, through sponsored internships, the private sector and many NGOs have discovered ways to develop a multilingual workforce that can meet their future needs. Some work through programs like Northeastern University’s Global Co-op, which connects students with professional internships abroad, thereby offering language and cultural training as well as valuable work experience.94 Even a quick online search reveals dozens of such opportunities for students interested in exploring professional experiences abroad, including programs with Deloitte, Goldman-Sachs, and the World Bank, as well as U.S. embassies, world governments, and a host of other large and small corporate and nonprofit entities.95 Clearly, it is in the best interests of these organizations, and of U.S business more generally, to recruit and train more talented young people for success in a global economy—and international internships should be a part of any global strategy.

According to the Critical Language Scholarship Program, an initiative of the U.S. Department of State, critical languages are non-Western European languages that are important to U.S. national security.89 As of December 2016, the Department of State has identified fourteen critical languages and offers a variety of scholarships and programs for students who wish to study them. They are:

Jeffrey Wood was a Washington, D.C., public high school student when he had the opportunity to study abroad in China with D.C.-China Scholars—a program hosted by Americans Promoting Study Abroad—and was featured in the documentary film Beyond the Wall. He has since served as a student ambassador for the 100,000 Strong Foundation and Globalize D.C., and interviewed First Lady Michelle Obama live in China for Discovery Education. An alumnus of the National Security Language Initiative for Youth program, he has been granted numerous other awards, including a Gilman Scholarship, a Boren Undergraduate Scholarship, a UC Berkeley Public Policy and International Affairs Fellowship, and a Fulbright Teaching Fellowship. Wood holds a bachelor’s degree in Chinese language and literature from George Mason University and a certificate in Chinese language and literature from Harbin Institute of Technology.

A number of teacher associations and learned societies have collaborated to create a series of standards to help design curricula and establish performance outcomes for students as well as for language programs. The primary goal areas of the standards are designed to encourage students achieving the “5 Cs”:

Since 2013, forty states have adopted the World-Readiness Standards as part of their language education programs.96

92. Email exchange with the Commission on Language Learning, November 2016.