Many fields of research—such as those seeking to fundamentally understand the universe, generate new forms of energy, or unlock the secrets of subatomic particles—require large, technologically advanced instruments and facilities that necessitate decades of planning and billions of dollars of support. In other fields, such as environmental and climate sciences, advanced sensory devices must be deployed and maintained in all corners of the world, requiring not only massive data storage and analysis capabilities, but also cooperation and coordination across countries and international waters. These megaprojects also often advance the frontiers of technology and expertise that can be applied to other fields, but they typically require both more funding than the United States is willing or able to provide alone and commitments of support over many years.

In the early 1900s, philanthropies and private institutions were key players in supporting major investments in the U.S. scientific enterprise. The Carnegie Institution and the Rockefeller Foundation provided support for the construction and operation of U.S. telescopes, including those at the Mount Wilson and Mount Palomar Observatories built in Southern California in 1904 and 1928, respectively.116 The Rockefeller Foundation, along with academic institutions such as Tulane, Yale, and Johns Hopkins, contributed significantly to the establishment of the field of public health research as we know it today by funding medical and infectious disease research and establishing the International Health Division in 1913, a precursor to the World Health Organization.117

A policy framework for significant federal support of research across a wide range of scientific and technical disciplines began in 1945 when Vannevar Bush published Science—The Endless Frontier, which argued that scientific progress was in the national interest and merited federal funding, an argument that directly contributed to the establishment of the National Science Foundation in 1950.118 Increasingly, government funding of science has become essential for the U.S. research enterprise.119 The Atacama Large Millimeter/submillimeter Array (ALMA), which served as a critical part of the global array of telescopes that captured the first image of a black hole in 2019, cost $1.4 billion, $499 million of which came from the National Science Foundation.120 The X-ray free electron laser at the SLAC National Accelerator Laboratory, which generates X-ray pulses a billion times brighter than previously available at synchrotrons, required the support of the U.S. government to achieve success. The first construction, completed in 2010, is estimated to cost $460 million, and the second upgrade, approved in 2016, is to cost $1 billion.121 Since their construction, both megaprojects have been essential in their respective fields.

Today, large-scale scientific facilities used by American scientists have become increasingly expensive and are most often built by the U.S. federal government and, in some cases, with significant contributions from international partners and philanthropies.122 In the realm of high-energy and nuclear physics, capital costs have risen. For the construction of the SLAC National Accelerator Laboratory, the costs were $115 million in the 1960s (approximately $950 million in 2020 USD). For the construction of the Large Hadron Collider (LHC), the world’s largest and most powerful particle accelerator, the costs were $4.75 billion in 2008 (approximately $6.7 billion in 2020 USD).123 The LHC construction was undertaken by the European Organization for Nuclear Research (Conseil Européen pour la Recherche Nucléaire, or CERN), a research organization that sponsors and operates large particle physics instruments. To fund this major undertaking, CERN extended its funding partners to include non-European members, negotiating contributions from other nations including the United States (see CERN: Seeking Answers to Fundamental Questions about Our Universe). The United States was unlikely to have independently funded the construction ($4.75 billion) or the operating costs ($1 billion annually) of such a complex, high-energy instrument; in fact, the United States shut down its domestic Superconducting Super Collider project at 20 percent completion, with $2 billion already spent by the Department of Energy and the State of Texas, as management challenges emerged and estimated costs grew from $4.4 billion to $11 billion ($20 billion in 2020 USD).124

The next generation of large-scale facilities required to advance scientific discovery and enable development of cutting-edge technologies, such as space-based observatories, ground-based accelerators and ground-based telescopes, advanced light sources, and deep-ocean research, will cost more than any single country is likely to provide without direct ties to economic or national security interests. Given these costs, international collaborative funding appears to be the most likely path forward. However, it is unlikely that the United States would play a leadership role in all such endeavors. With the growth of international science, any of these projects may be championed and led by scientists and governments in other countries. The United States is currently participating in many collaborations that seek to push the frontiers of science, including the development of an interferometer in India to accompany the U.S., Italian, and Japanese detectors LIGO, Virgo, and KAGRA, respectively, to observe gravitational waves from four operational detectors at one time; and the Brain Research through Advancing Innovative Neurotechnologies (BRAIN) initiative to unlock the mysteries and develop fundamental knowledge about the human brain. The CISP initiative’s second report on international large-scale science discusses the future potential and importance of investing in such large-scale international scientific collaborations.125

International collaboration has been recognized as a major opportunity to sustain U.S. excellence in many fields, effectively leveraging the financial investment in scientific research made by the United States and working with scientific expertise from around the world. Without support and commitment to collaboration from the U.S. government, future U.S. scientists may be excluded from some of the world’s leading scientific projects and associated technological advances, especially as multinational funders, including the EU and the International Science Council Global Forum of Funders, promote increasingly large international projects.126

The United States must participate in these advances and be prepared strategically to commit to collaboration on the funding, planning, development, and operation of new large-scale scientific research capabilities at home and abroad.

CERN: Seeking Answers to Fundamental Questions about Our Universe

On July 4, 2012, the world learned of the first detection of the Higgs boson, the long-sought particle predicted by Peter Higgs in the 1960s and of central importance to the Standard Model on elementary particles. This discovery was among many made at CERN, based near Geneva, Switzerland, and home to the world’s largest high-energy physics particle collider, the Large Hadron Collider. CERN is a collaboration of twenty-three European nations and Israel. The facility provides a platform for over twenty international experimental programs primarily through its two massive detectors, ATLAS (A Toroidal LHC ApparatuS) and CMS (Compact Muon Solenoid), sited on the Large Hadron Collider, which circulates proton beams to facilitate research about elementary particles, the most fundamental constituents of matter.

While the United States is not a CERN member, it has made major contributions to the construction, operation, and upgrading of both ATLAS and CMS. Thirty-one U.S. institutions and universities with more than 2,100 users conduct research at CERN, which makes the United States the largest user community.127 CERN is an excellent example of a facility in which partnership, not leadership, has benefited the United States and U.S. scientists. 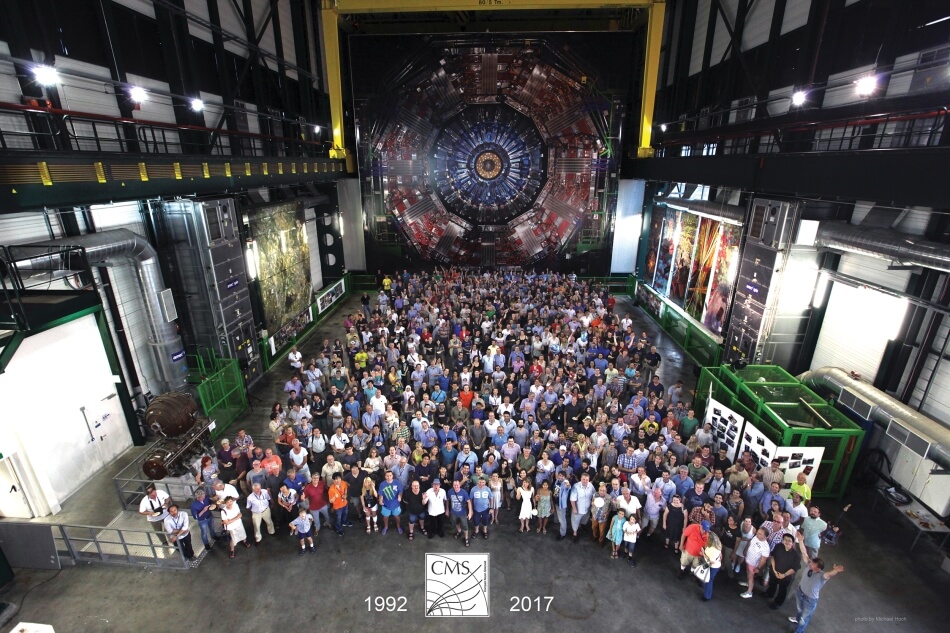 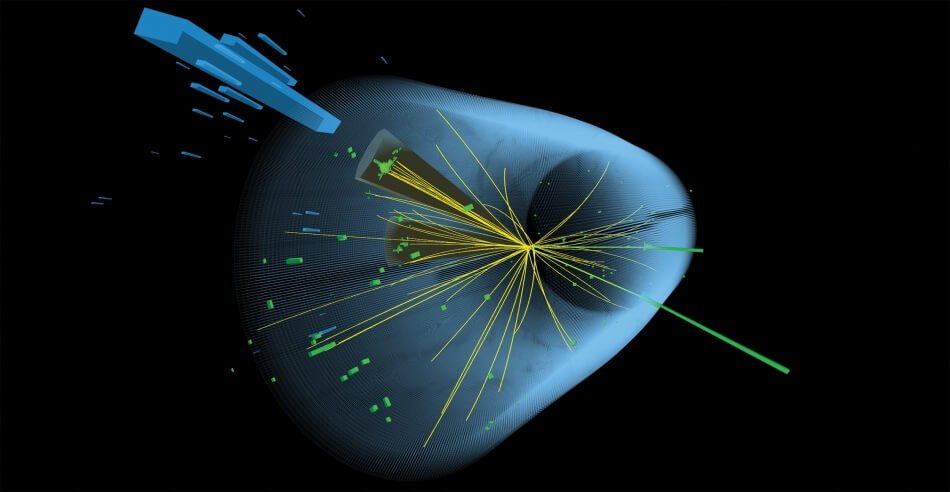 Collision event at the Large Hadron Collider that produced jets of particles that very likely resulted from the decay of a Higgs Boson particle. © 2018 by the European Organization for Nuclear Research, for the benefit of the CMS Collaboration.