A robust scientific enterprise is essential if the United States is to enjoy technological leadership in the future. This leadership, coupled with a supportive, strong economy, has made it the most capable military power and provider of foreign assistance in the world.

Science contributes both to new technological capabilities and to innovations that fuel the economy generally. Science is the foundation, as well, of efforts to combat the two natural phenomena that most threaten the nation’s security: global pandemics and global climate change.102 The nation’s position of strength is, however, threatened by a number of factors that include the rising scientific capabilities of other nations whose aggregate R&D expenditures presently dwarf those of the United States and the rising economic power of other nations increasing their ability to mount comparable military capabilities. The threat is compounded by the diminishing commitments of the U.S. federal government to R&D expenditures and diminishing state expenditures for public higher education of the S&T workforce, both of which are weakening, and will continue to weaken, our future scientific leadership.103

The adjustment to circumstances that are so different from those that prevailed following World War II, when the United States dominated science, trained outstanding scientists, engineers, and technicians, while also attracting superb talent from around the world, requires thoughtful policies and leadership. It is a world in which scientific breakthroughs that lead to technological leadership, military strength, and the ability to face and mitigate destructive natural phenomena are likely to occur in other countries, some of which are potential adversaries.104 It is a world in which other countries will produce some of, and compete vigorously for, the best scientific and technological talent. What’s more, the experiences of the last half-century, in which previously impoverished nations rose to scientific and technological prominence, have led us to expect that presently less-advanced nations will rise markedly in scientific stature and produce some of the future’s most talented researchers.105

Under such circumstances, it is vital that the United States carefully define those S&T research areas in which classified national security information must be protected, even with the recognition that the lack of openness and broad cooperation is likely to slow progress.106 Both where the research is performed and who performs it should be vetted. Most universities are not appropriate venues for such research. International collaboration should be controlled thoughtfully.

In the broad area of fundamental research that is openly publishable—the subject of this report—it is vital that the nation maintain a robust scientific and technological community that is producing many of the breakthroughs and is in a position to learn of, and take advantage of, the advances that occur outside its borders.107 The United States must work with allies and adversaries alike to counter the global phenomena that threaten all nations. Finally, the United States must take strong measures to continue to attract talent from around the globe. It is in these endeavors that international scientific cooperation on fundamental research contributes to national security. As discussed in this report, collaboration tends to produce higher quality research. It helps to attract the best minds to the United States. It is vital that the government nurture, rather than inhibit, such collaboration. In doing so, the United States must look not only to those nations that are presently strong, but also to those in the Global South that are emerging as scientific partners.

A central component of national security policy in this new world is the necessity to maintain sufficiently good relations with potential adversaries so that mutually destructive military action never occurs. Healthy scientific cooperation with researchers in those countries, including mutual participation in large international scientific facilities and programs, helps to build trust and should be encouraged. Common problems like environmental degradation, climate change, and pandemics necessitate such cooperation. They offer the United States the opportunity to provide global leadership that will benefit humankind if our country decides to engage in such international efforts.108

In these troubled pandemic times, the thoughts shared by President Harry S. Truman in his address to the 1948 Centennial Anniversary Annual Meeting of the American Association for the Advancement of Science ring true:

Now and in the years ahead, we need, more than anything else, the honest and uncompromising common sense of science. Science means a method of thought. That method is characterized by open-mindedness, honesty, perseverance, and, above all, by an unflinching passion for knowledge and truth. When more of the peoples of the world have learned the ways of thought of the scientist, we shall have better reason to expect lasting peace and a fuller life for all.109

Shared scientific values and a history of partnership can contribute to diplomatic efforts in many different regions of the world. As an example, Synchrotron-light for Experimental Science and Applications in the Middle East (SESAME) serves as one beacon of hope for scientific collaboration promoting peace in the region (see SESAME: Bringing Middle East Countries Together Through Science).

Synchrotron-light for Experimental Science and Applications in the Middle East (SESAME) is a major regional international research laboratory based in Allan, Jordan. It provides a third-generation synchrotron light source and is intended to foster Middle East scientific excellence and build bridges across societies that are not political allies, hopefully contributing to a culture of peace through scientific collaboration110. The first synchrotron light source was officially inaugurated in 2017, with its first users hosted in 2018.111 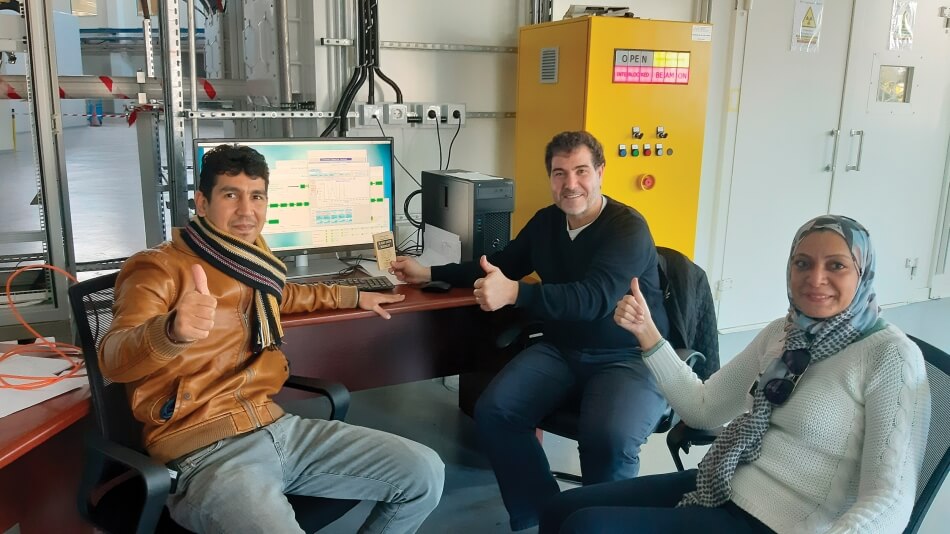 SESAME was established in 2002 under the auspices of the United Nations Educational, Scientific and Cultural Organization (UNESCO) and counts Cyprus, Egypt, Iran, Israel, Jordan, Pakistan, Palestine, and Turkey as its member states.112 Its advisory committees include experts from synchrotron light sources in Canada, France, Italy, Japan, Spain, Sweden, Switzerland, the United Kingdom, and the United States. The International Atomic Energy Agency (IAEA) is also an observer on the SESAME council.113

SESAME has used the CERN Convention and other CERN protocols as a template for its development. Capital costs posed a major challenge early in its development until Israel, Jordan, and Turkey pledged $5 million each in 2012, followed by €5 million from CERN and €3.35 million from Italy.114 Concerns about ongoing electrical power costs led to Jordan allocating the necessary $7 million from funds provided by the EU for a solar power plant to support the deployment of clean energy sources. In February 2019, the solar power plant made SESAME the first major research facility in the world to be powered by renewable energy.115 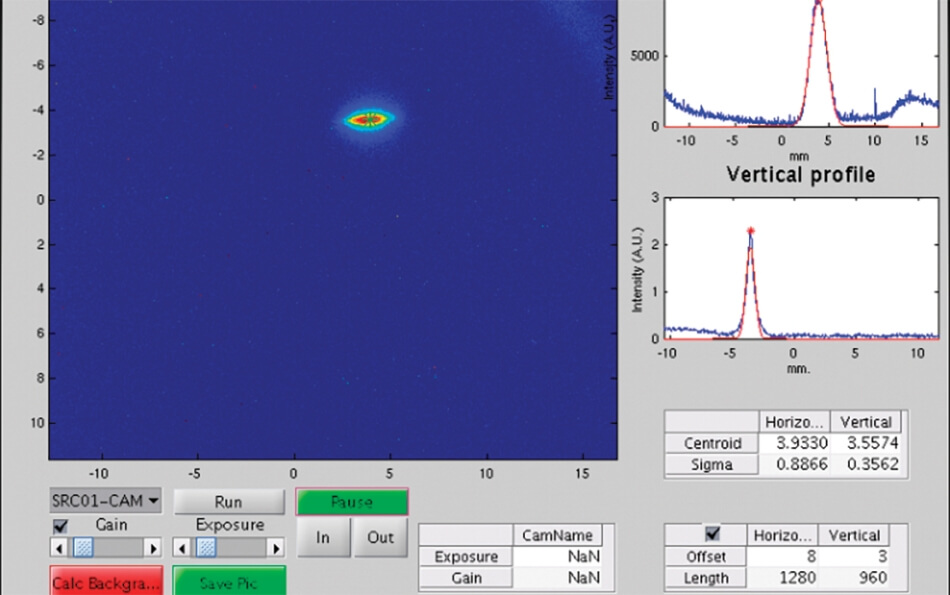 The bright red spot on this display shows the first electron beam circulating in a storage ring on January 12, 2017. © 2017 by SESAME. 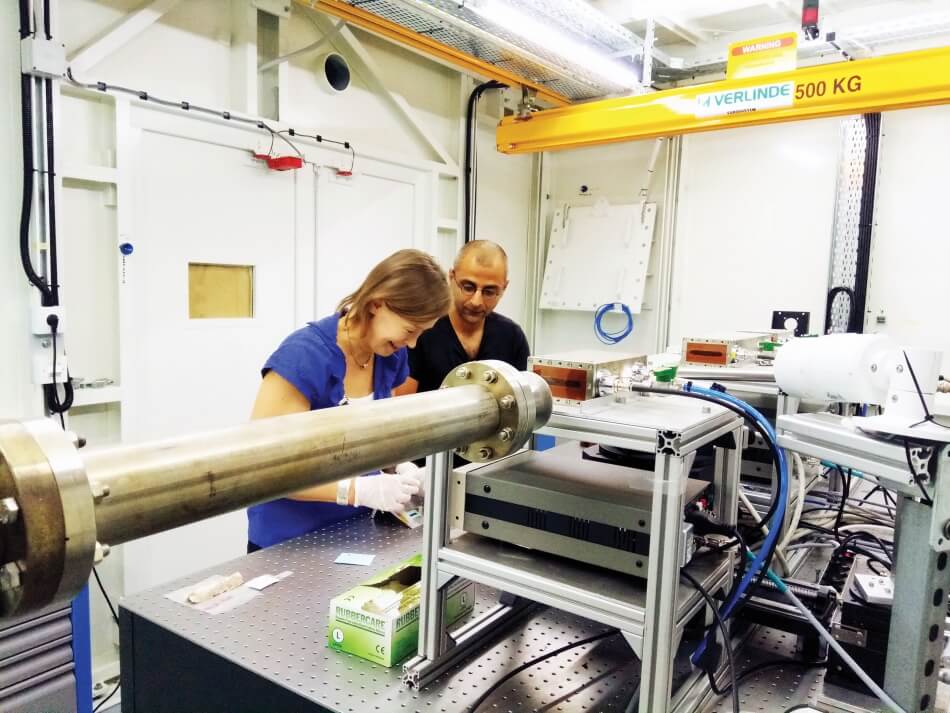 Researchers from the Cyprus Institute (Kirsi Lorenz, left, and Iosif Hafez, right) performing XAFS and XRF measurements of archaeological human remains from Iran, the first to use dedicated beam-time at SESAME, on July 17, 2018. © 2018 by SESAME.