Economists generally agree that advancements in knowledge, largely based on scientific and technological innovation, are responsible for approximately half of advanced economies’ long-term economic growth, a consensus that has historically led to long-standing bipartisan support for U.S. federal funding of fundamental scientific research.70 Economic growth results from investments in R&D along many paths and across several key sectors.

Scientific research can grow American prosperity by raising the quality of life. Fundamental research and development have resulted in dramatically improved public health, generating many vaccines and new treatments for cancer and heart disease. American life expectancy grew from forty-five to seventy-two years between 1870 and 1970 due in part to medical advances such as these, albeit with unequal distribution of the benefits.71 American farmers and the American people alike have benefited from a massive increase in agricultural output from farm equipment technologies and bioengineering approaches, although the use of newly developed chemical fertilizers and pesticides have also had negative impacts on the environment and human health.72 In the past century, international collaborations on agricultural and food sciences have saved millions of people around the world from starvation; with food security as a major global threat in the decades to come, continuing research in these areas is important for supporting both American and global well-being and prosperity (see International Rice Research Institute: Agricultural Research for Global Food Security). Science has fostered innovations such as modern electronics, cancer radiation therapies, and the Internet. The scientific advancements that improve Americans’ quality of life, many of which have been developed by or in collaboration with international researchers, can be produced with greater benefits if the United States commits to supporting scientific endeavors, including those that strengthen international scientific collaborations.

Private industry directly capitalizes on scientific research, generating wealth as small businesses and large companies alike develop and sell technologies that emerge from cutting-edge science. The global biotechnology market, to name one example, is projected to grow at a compound annual growth rate of 9.9 percent and be worth more than $775 billion by 2024 as biotechnology companies continue to develop clinical and other research programs (see Spinal Muscular Atrophy: Developing Treatments for Childhood Disease).73

Companies that perform R&D, including multinational companies based in the United States, have widely recognized the advantages of operating internationally. These multinational companies are an essential component of the private U.S. R&D enterprise. An NSF analysis found that U.S.-based multinational companies performed $197 billion, or 71 percent, of all U.S.-located business R&D in 2010, employing an estimated 788,000 Americans representing over half of the U.S. business R&D workforce.74 Foreign multinational companies employed an additional 155,000 U.S. R&D workers and conducted 14 percent of U.S. R&D.75 Global operations, despite potential vulnerabilities to global supply chain disruptions and other challenges, are a key part of these job-generating companies’ strategies.

Fundamental research is a major source of discovery and new knowledge, critical to the development of new technology. Fundamental research is crucially dependent on U.S. government support of research at American universities, both for generating new knowledge and for training a robust STEM workforce. Increasingly, fundamental research is performed globally: in 1960, U.S. federal funding represented 45 percent of all global R&D; by 2016, that percentage had fallen to less than 10 percent.76 In this context, the United States, its companies, and its scientists must engage with the broader scientific community if America is to be among the world leaders across all scientific fields and benefit economically from the dividends of scientific research conducted both nationally and internationally.

In the 1950s, following World War II, much of Asia was on the brink of famine as rice yields remained stagnant and insufficient to meet the population’s needs. For many people in Asia, rice was, and continues to be, vital to survival, constituting up to 80 percent of caloric intake.

The Rockefeller and Ford Foundations joined forces to establish the International Rice Research Institute (IRRI) in 1960 housed on the University of the Philippines campus with support from the government of the Philippines.77 The Institute assembled an international team of scientists to develop high-yielding rice crop varieties. After years of experimentation, IRRI announced in November 1966 the official release of IR8, a genetic cross between two strains of rice from Indonesia and China (see photo).78 IR8 was planted on a farm in India in 1967 with tremendous success and quickly made its way to farms across the region and the world. More than fifty years later, IR8 continues to be celebrated for saving millions of lives from starvation, promoting economic prosperity for millions of farmers, and launching the first Green Revolution.79 Today, IRRI continues its work as a member of CGIAR, a massive global partnership that uses scientific research to address challenges in the world’s food system and promote well-being, health, and food security for people around the world.80 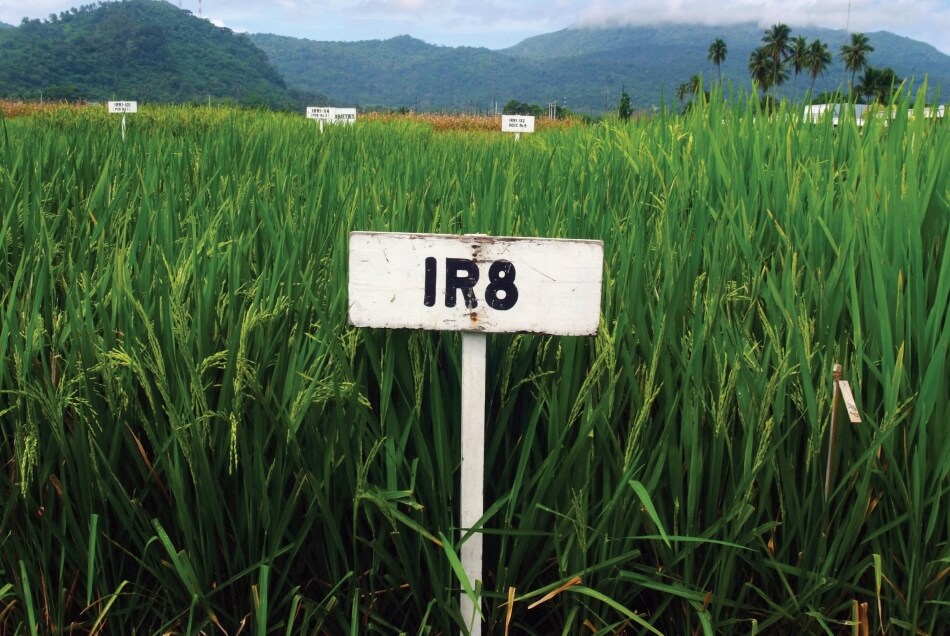 IR8, a genetic cross between two strains of rice from Indonesia and China, was the first high-yielding rice variety successfully developed by IRRI after the collaboration’s establishment in the 1960s. © IRRI/International Rice Research Institute.

As the world’s population continues to increase, food security will be a growing challenge to national and economic security that the United States will face.81 The U.S. Department of Agriculture’s Economic Research Service’s 2020 International Food Security Assessment estimated 844,300,000 people across seventy-six low- and middle-income countries (LMICs), mostly in Africa, are food-insecure, an 11 percent increase from 2019 that can largely be attributed to the shock of COVID-19.82 The 2020 Global Report on Food Crises reported that 135,000,000 people were living in crisis or worse, with many living in war-torn or conflict-driven areas.83 In the United States, 16.5 percent of households with children, the majority Black and Hispanic, reported being food insecure in June 2020; while these numbers are exacerbated by the COVID-19 pandemic, 11.1 percent of U.S. households reported experiencing food insecurity in 2018.84

To overcome these challenges, continued support of agricultural research endeavors is essential. Global efforts like CGIAR’s Genebank Platform, which houses more than seven hundred thousand genetic samples of plants and crops, provide opportunities for developing new types of resilient and high-yielding crops as environments change and biodiversity is lost.85 Though in some cases controversial, researchers can also use genetic engineering to address nutritional deficits, such as through the cultivation of the genetically modified Golden Rice, which is biofortified with proVitamin A to reduce Vitamin A deficiency (VAD), a leading cause of preventable childhood blindness and increased risk of infection for over 190 million children worldwide.86 Researchers can also use agricultural science to identify methods of growing crops more efficiently; for example, the international collaboration Realizing Increased Photosynthetic Efficiency (RIPE), based at the University of Illinois at Urbana-Champaign, seeks to increase crop production by improving the process of photosynthesis.87

Food security will continue to be a major global challenge amid many rising threats in the decades ahead, including increasing extreme weather events, desertification, sea level rise, biodiversity loss, and ecological disruption; increasing numbers of displaced peoples due to war, violent conflict, and those seeking environmental refuge; and the future pandemics to come.88 International research efforts and collaborations hold significant potential for improving food quality and yield and for expanding food access in the face of these challenges.

Approximately one in fifty people, or six million Americans, are carriers of a defective gene that leads to spinal muscular atrophy (SMA).89 This disease, which affects 1 in 6,000–10,000 infants and children, is a result of insufficient SMN protein and is marked by muscle weakness and loss of motor function; the most severe form, which is also the most common form, has an age of onset of younger than six months and is associated with a life expectancy of less than two years.90 SMA is one of the most common of the so-called “rare” diseases and is the leading genetic cause of infant death.91 It is estimated to affect 10,000–25,000 children per year in the United States alone.92

In late 2016, Spinraza, the first approved SMA drug, which directs the gene SMN2 to make a more functional form of the SMN protein, was released.93 The story of its development is one of intensive collaboration among researchers worldwide, led by Adrian Krainer of Cold Spring Harbor Laboratory in New York.

Krainer was born in Uruguay and first came to the United States on a full scholarship to Columbia University as an undergraduate studying biochemistry.94 He remained in the United States to complete his Ph.D. studies at Harvard University, where he first became interested in the topic of messenger RNA splicing, which underlies the mechanism of Spinraza.95 He subsequently established a lab that studies splicing at Cold Spring Harbor Laboratory in New York, a U.S. research institute with a campus for scientific meetings that also offers courses in China.96 Krainer recruited a diverse set of lab members, including Yimin Hua, a postdoctoral fellow who had received his Ph.D. from Sun Yat-sen University in China and worked on the topic of SMA at the Tufts Medical Center and University of Massachusetts Medical School. Hua’s research ultimately made him the coinventor of Spinraza.97

Since its establishment over thirty years ago, Krainer’s laboratory has collaborated broadly, both domestically and internationally, to advance the field’s understanding of RNA splicing, SMA, and other topics. International collaborators have included scientists in Japan, Denmark, Spain, and Canada, among other countries.98 In the mid-2000s, this body of work led to a close collaboration between Krainer and Ionis Pharmaceuticals, based in California, that ultimately led to the development and release of Spinraza.99 Since its release, Spinraza has treated more than three thousand Americans and more than ten thousand patients worldwide, ranging in age from three days to eighty years.100

The success of Spinraza has also benefited the American private biotechnology sector. As one indicator of its financial value, Biogen, based in Cambridge, Massachusetts, paid Ionis $1 billion in 2018 to expand their industry collaboration and gain rights to license and sell therapies for neurological diseases, primarily due to the development of Spinraza. Global sales of Spinraza exceeded $2 billion in 2019.101