Appendix B: Comparison of U.S. and China Gross R&D Investment with PPP Update

In this report, we use purchasing power parity (PPP), as defined by the Organisation for Economic Co-operation and Development (OECD), to compare China’s investments in R&D and research with those of the United States. The intended purpose of PPP is to take into account differences in the actual costs of a bundle of goods and services in different countries. While economists debate the use of PPP for different kinds of national expenditures, it is widely used for comparisons between different countries.

Figure 1 on page 10 of this report is a comparison of the national R&D investments (public and private) of the United States and China, where the latter’s spending has been adjusted by applying the purchasing power parity (PPP) currency conversion, reported by the OECD, as of the time this report was being written. Linear projections reported by the National Science Board, based on data from their 2018 and 2020 Science and Engineering Indicators, suggested that a crossing of the China and U.S. curves could occur as early as 2018. However, in 2020 the OECD revised their PPP currency conversion for China, https://stats.oecd.org/Index.aspx?DataSetCode=MSTI_PUB. The new comparison pushes the crossing point further into the future, as shown in Figure 14. We have not attempted a projection of the new curve beyond 2018, the last year reported by the OECD.

The OECD changes do not affect the analysis and findings in this report in any significant way. The arguments for sustainable real growth in federal research funding are not changed nor are the recommendations in this report. 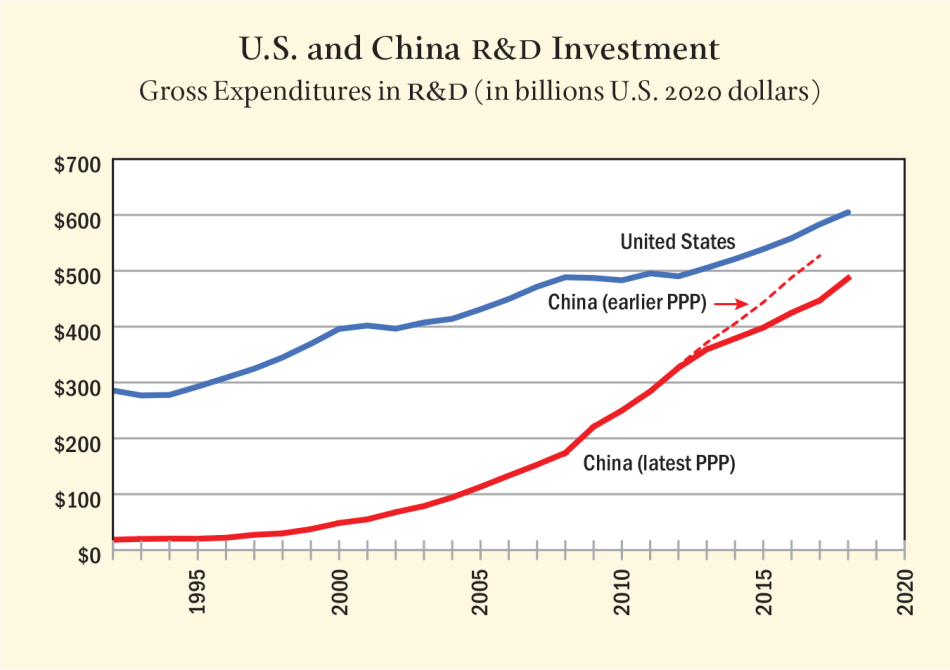 Project
New Models for U.S. Science and Technology Policy
Share
Previous Section
Appendix A: Recommendations from Restoring the Foundation
Back to table of contents