Approaching in the not-too-distant future is a fiscal circumstance that could greatly complicate any plans for increased R&D funding in the United States. This near-existential issue has received little attention from those addressing the nation’s future investments in R&D.

The issue has been noted by the Congressional Budget Office (CBO) for several years, but with seemingly little impact. As illustrated in Figure 12, expenditures already committed under current law for only two general budgetary categories – entitlements and debt interest – are projected to equal the totality of federal revenues by 2042. At that time any R&D funding will have to compete directly with such priorities as national defense, homeland security, and infrastructure. Major elements of entitlement (nondiscretionary) outlays are Social Security, Medicare, Medicaid, and pension obligations – each exceedingly difficult to reduce, at least from a political standpoint. If the tax reductions enacted by the Tax Cuts and Jobs Act of 2017 are extended beyond their scheduled expiration in 2025, revenues will be further reduced. Similarly, if interest rates rise above currently projected levels (about 1.5 percent over the next ten years), outlays will further increase. The most recent CBO projection, assuming rapid economic recovery from COVID-19, is that federal spending in 2030 will reach 23 percent of GDP, while revenues equal 17.8 percent of GDP.

Figure 12: Federal Revenue and Nondiscretionary Spending as a Percentage of GDP 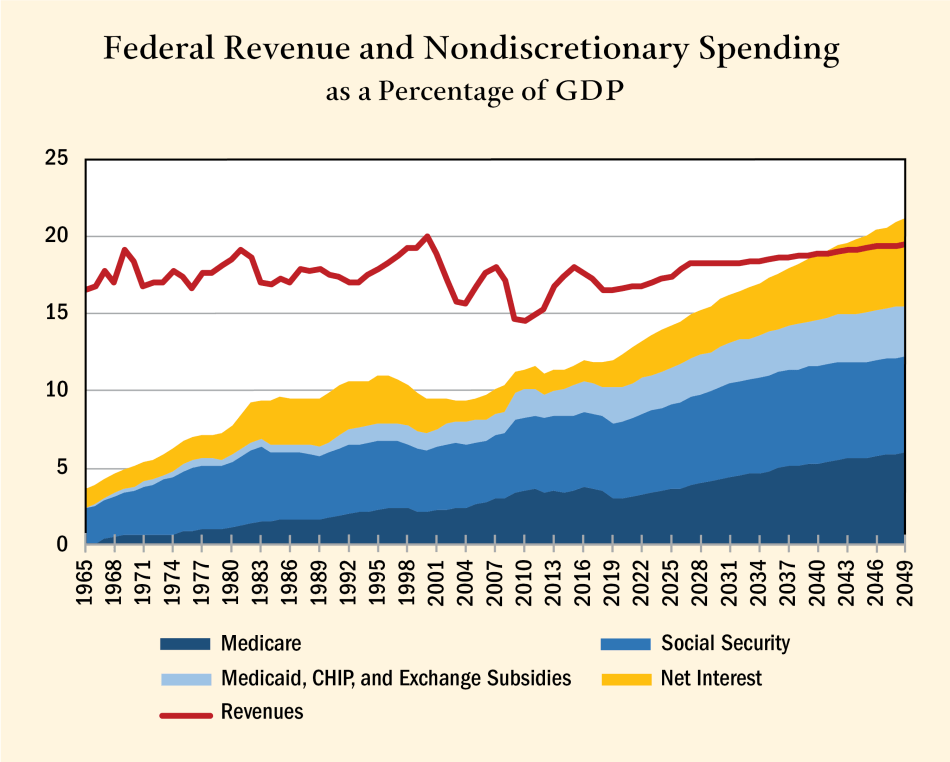 The U.S. national debt is now over $23 trillion, while its GDP is nearly $22 trillion. The federal debt held by the public (as opposed to debt held by government accounts or intragovernmental debt) equals 73 percent of that total. Prospects for reducing debt, given recent history, must be considered tenuous at best. During fiscal year 2019 alone the national debt increased by nearly 6 percent, driven by a deficit increase of 26 percent. Should the economic decline due to the pandemic linger for an extended time, this dilemma will intensify.

Even under the most favorable conditions, R&D will be increasingly squeezed as it competes for a portion of the vanishing discretionary element of the federal budget – absent large increases in taxes or borrowing or major reductions in entitlements. These observations highlight the need to establish a national understanding of the importance of research and the impact it has on the standard of living of Americans.

Project
New Models for U.S. Science and Technology Policy
Share
Previous Section
The Ingredients of Innovation: China and the United States
Next Section
The Perils of Complacency
Back to table of contents