The Ingredients of Innovation: China and the United States

The United States cannot compete with China through the size of its workforce, where China possesses a major advantage, but rather must compete through creativity and innovation. Yet China is gaining the upper hand in the latter as well, closing in or surpassing the United States in measures including gross R&D spending, funding for basic research, patents granted, S&E articles published, S&E bachelor’s degrees and doctorates awarded, and researchers employed (Figure 3). 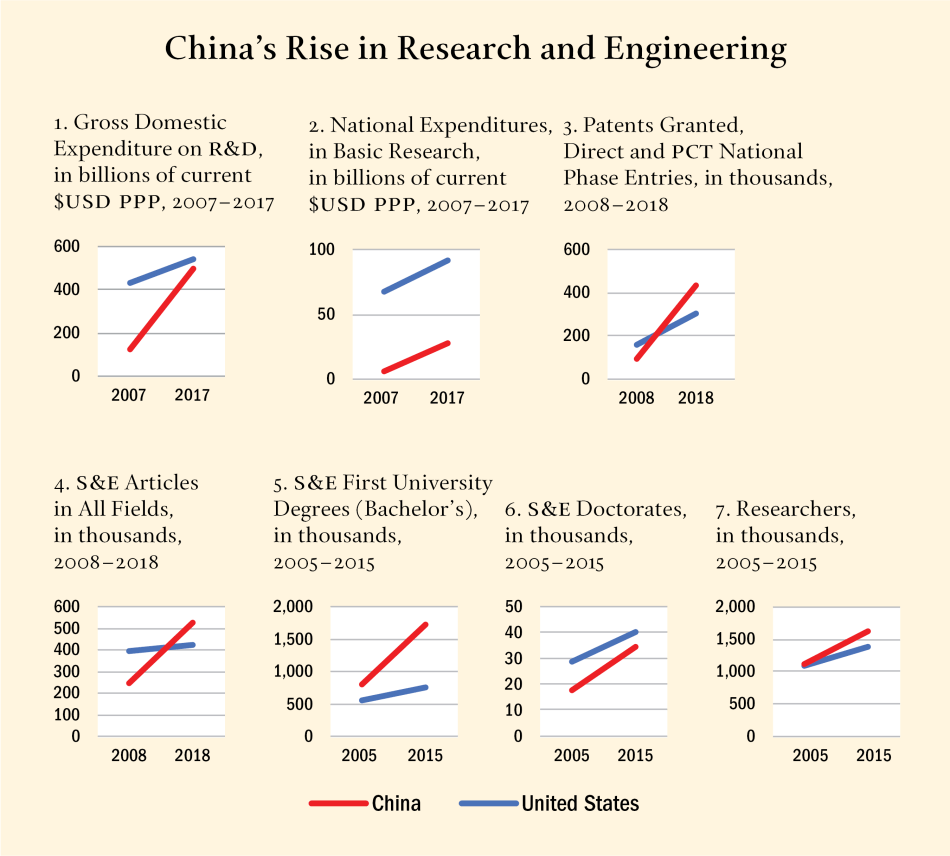 Innovation through science and technology has four fundamental and closely interrelated components: 1) human capital; 2) knowledge capital; 3) an ecosystem conducive to innovation; and 4) financial capital. The following paragraphs examine innovation in China and the United States using these four metrics.

Today, China awards more bachelor’s degrees in science and engineering than the United States, the European Union (EU), and Japan combined, having bypassed the United States in 2003.12 To keep pace with demand, China is projected to continue to increase the numbers of S&E graduates substantially. The number of corresponding degrees awarded by U.S. institutions continues to be relatively flat (Figure 4a).13 A substantial share of those degrees goes to international, frequently Chinese, citizens. China remains behind the United States in the production of S&E graduates with doctorates from its own universities (Figure 4b) but is rapidly increasing these numbers, and Chinese university rankings are increasing as well.14 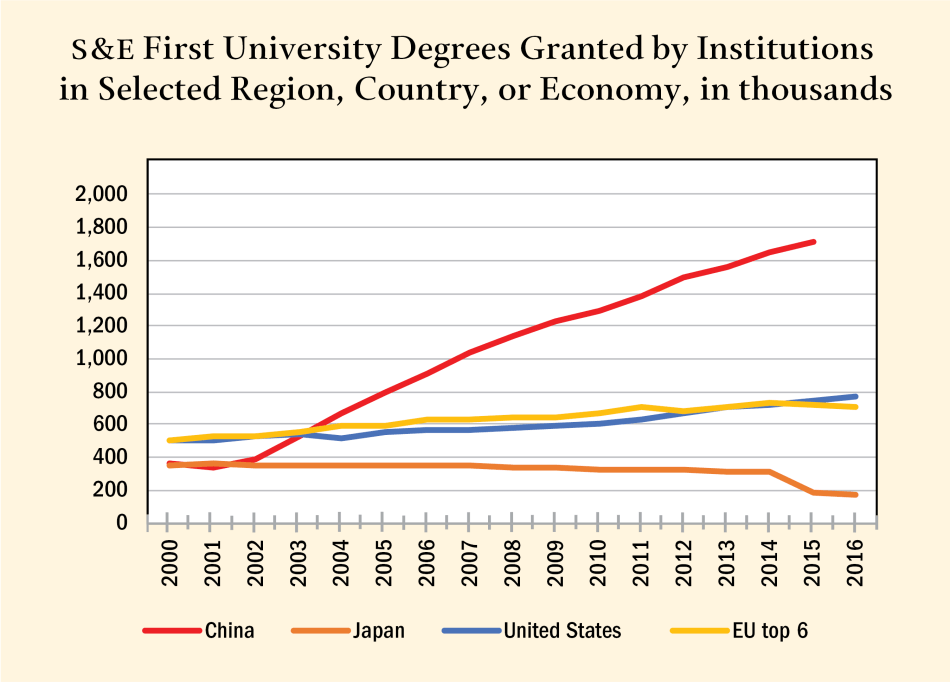 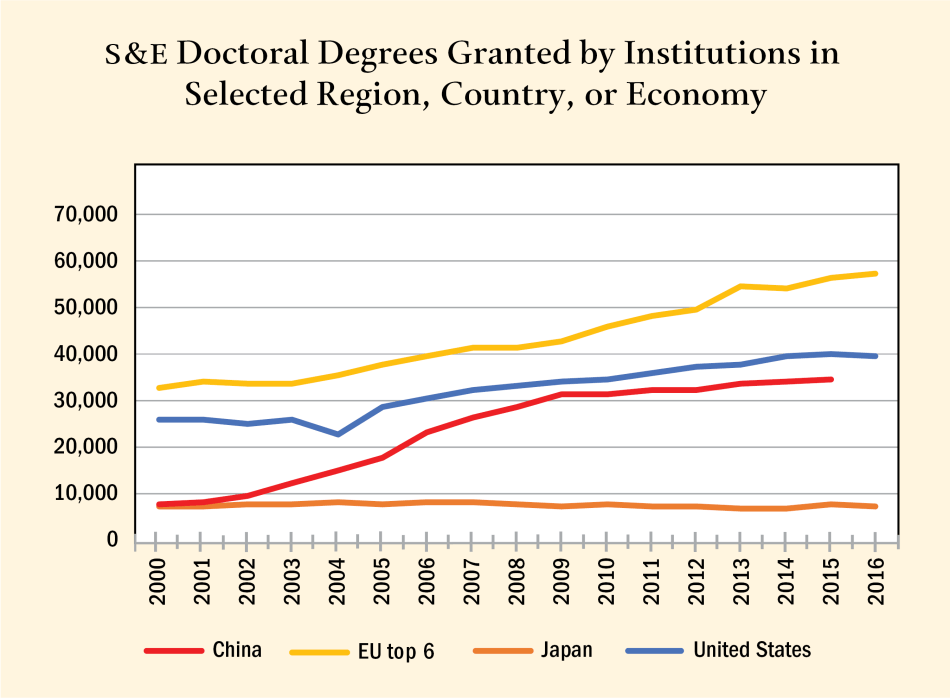 Lesser interest in science, technology, engineering, and mathematics (STEM) careers among America’s youth is exacerbated by the inadequacy of the nation’s precollege educational system.15 The Program for International Student Assessment (PISA), which tests 15-year-olds in reading, mathematics, and science, finds U.S. students are ranked 25th among OECD nations (Figure 5). 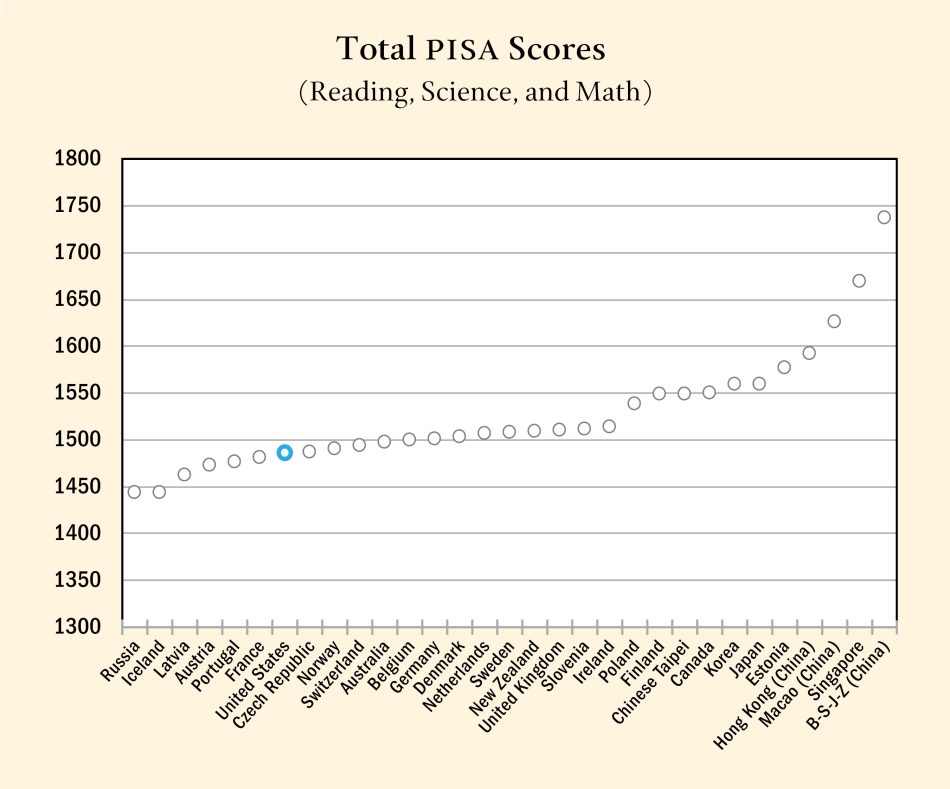 Compounding the issue of overall poor domestic K-12 STEM education, the United States is systematically failing to attract Americans of diverse backgrounds into STEM careers, whether measured by gender, race, socioeconomic status, sexual orientation, disability, religion, or geographic location within the United States.16 If not addressed, this underrepresentation will continue to hamper U.S. efforts to develop a strong domestic STEM workforce, especially as historically underrepresented groups become an increasing proportion of the overall U.S. population.

Demand for workers in the STEM fields continues to be very high, and the United States continues to be extremely dependent upon immigration of talented men and women to meet this demand. While there is no standard definition of the STEM workforce, the American Immigration Council (AIC) uses both a narrow definition – physical and life sciences, engineering, mathematics, and computer science – and a broader definition that adds physicians, nurses, and social scientists. According to the AIC, in 2015 STEM workers (narrow definition) made up about 5 percent (approximately 8 million) of the total U.S. workforce, and 24 percent (approximately 2 million) of STEM workers (narrow definition) were foreign-born (Figure 6a).19 These data do not include academic positions, many of which are held by foreign-born faculty.20

Figure 6a: Foreign-­Born in U.S. STEM Workforce, in millions 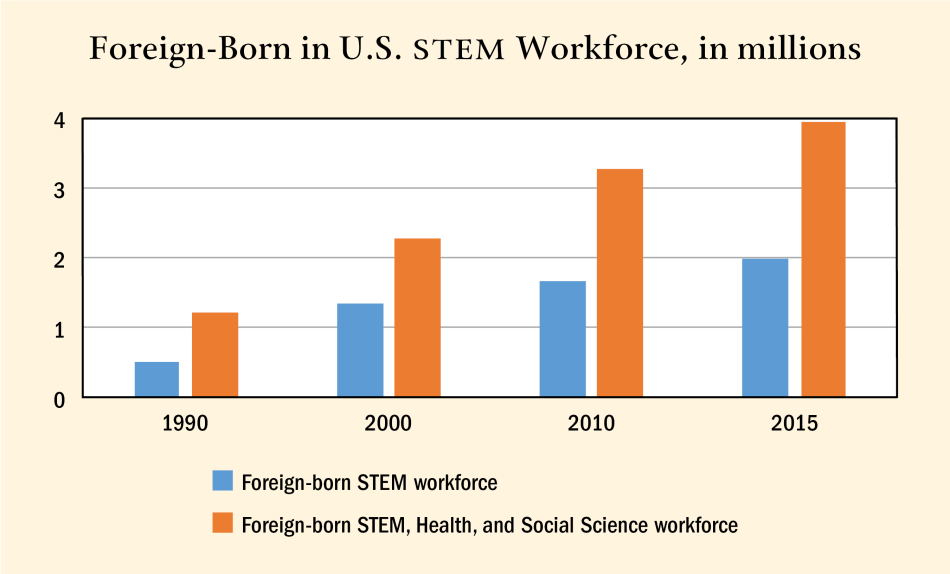 In the academic year 2017–2018, about 280,000 men and women from China were enrolled in U.S. colleges and universities as undergraduate or graduate students, amounting to about one-third of all international students studying in the United States.21 Second to China in terms of total U.S. undergraduate and graduate enrollment is India (120,000), followed by South Korea (44,000) and Saudi Arabia (39,000).22 Strikingly, the percentage of Chinese students who return to China following their studies has increased markedly over the past decade (Figure 6b),23 representing a loss of talent for the countries who train them, including the United States.

Fibure 6b: Percentage of Chinese Students Studying Abroad and Returning to China 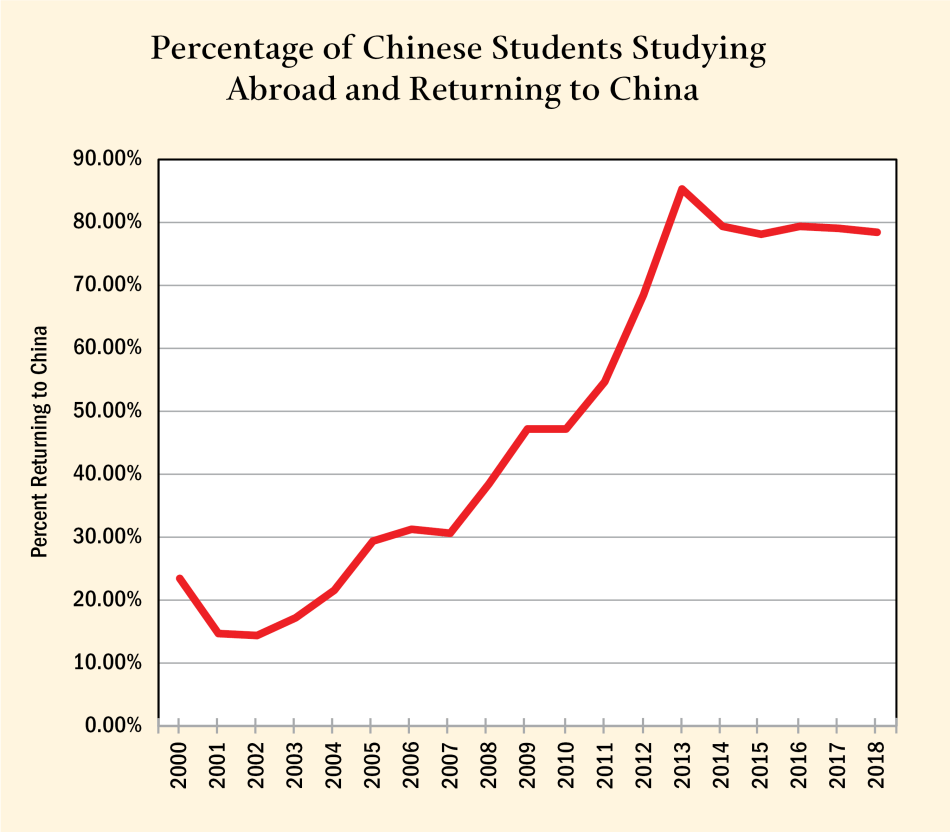 Members of Congress, U.S. intelligence officials, and others have raised concerns that China’s government – through its consulates – is directing some Chinese students and visiting researchers to steal intellectual property and spread pro-China political propaganda on America’s campuses. There is clear evidence that both are happening, at least to some degree. The U.S. Federal Bureau of Investigation (FBI) has issued warnings about China’s talent programs and espionage.24 According to a senior U.S. Department of Justice official, over 90 percent of U.S. economic espionage prosecutions include individuals or firms from mainland China.25 FBI officials have visited various universities to provide briefings on the attendant risks, and research has documented isolated incidents of Chinese students attempting to pressure fellow Chinese students, faculty, and administrators viewed as critical of China.26 University leaders are working with federal officials to ensure that any new policies do not undercut the openness that has always been a fundamental strength of American higher education.27

Altogether, the benefits of foreign-born individuals contributing to U.S. science and technology far outweigh the risks.28 Recognizing this, the committee concludes that an appropriate solution is not blanket prohibitions within basic research, as some have proposed, but rather enhanced alertness and action in cases where evidence indicates violation of U.S. law. This, of course, applies to domestic as well as foreign-born individuals.

There is no agreed-upon single measure of knowledge capital; however, commonly used metrics include the numbers and quality of publications and patents.

Figure 7a: S&E Articles, by Global Share of Selected Region, Country, or Economy 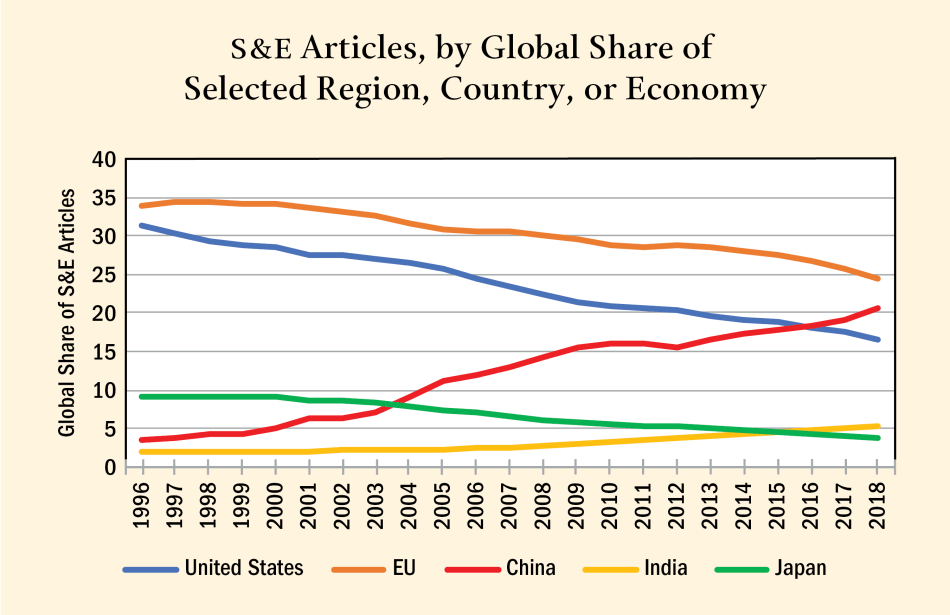 Figure 7b: S&E Publication Output in the Top 1 Percent of Cited Publications, by Selected Country or Economy 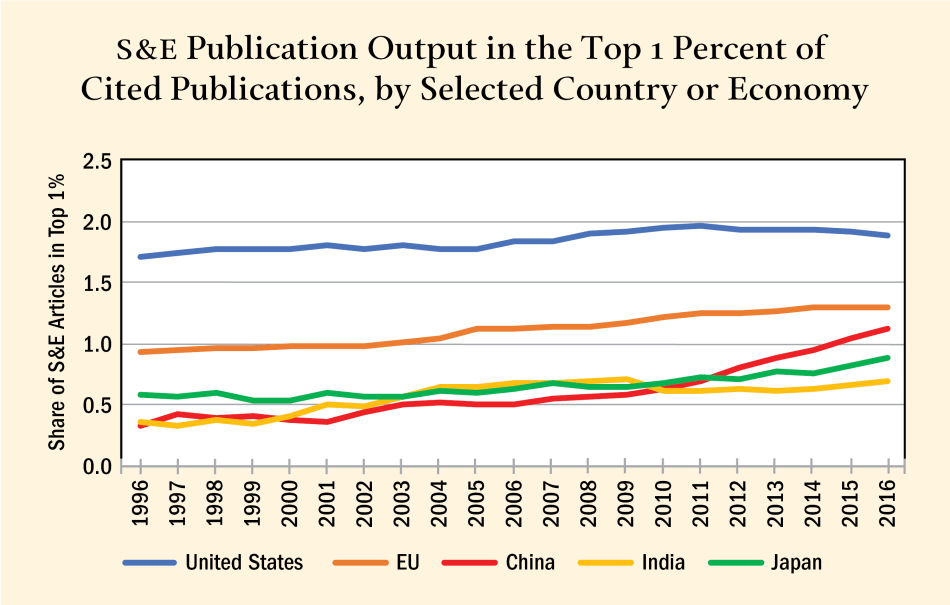 One measure of the effectiveness of the transition from research discovery to practical application is the number of patents granted, a category in which China has taken the lead in recent years (Figure 8). However, the large fraction of Chinese patents that go unrenewed after five years calls into question the value of many of those patents in the first place. 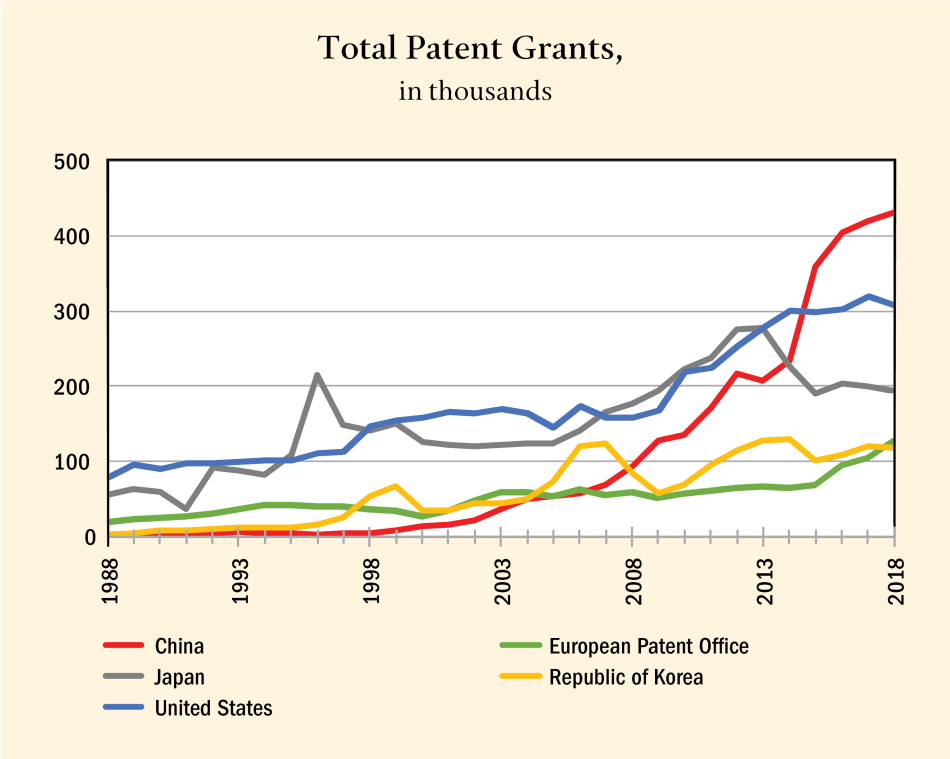 Today is a time of unprecedented opportunity for scientific discovery and rapid advances in technology and its applications. Research discoveries lead to new technologies, and new technologies provide tools that in turn accelerate research discovery. And this is happening at an accelerating pace. Examples include big data, artificial intelligence (AI), machine learning, quantum technology, CRISPR, genomic medicine, medical imaging, robotics, high-performance materials, nanotechnology, and much, much more. The sciences have been described as undergoing a “revolution” that, to achieve meaningful progress, requires a significant and purposeful convergence of methods and approaches from scientists and engineers across fields and industries.30

One measure of how the United States compares to the rest of the world in innovation is its ranking on the Bloomberg Innovation Index. In Bloomberg’s 2019 assessment, the United States ranks eighth overall, tenth in R&D intensity (national R&D spending as a percentage of GDP), 28th in researcher concentration (professionals engaged in R&D per capita), 25th in manufacturing value added, 43rd in tertiary efficiency31 (principally the fraction of individuals receiving tertiary – university or college – education),32 and 76th in the fraction of initial degrees awarded in engineering.

The World Intellectual Property Organization (WIPO), an agency of the United Nations, publishes a Global Innovation Index (GII) based on its assessment of 80 indicators of innovation performance in 126 countries, including such metrics as political environment, education, infrastructure, and business sophistication. In the 2018 report, which focuses on energy innovation, China advanced to 17th place because of “an economy witnessing rapid transformation guided by government policy prioritizing R&D–intensive ingenuity.” In contrast, the United States slipped from fourth to sixth place in one year. The United States was in first place as recently as 2008.33

Even in cases where the United States performed significant early research, markets and jobs have been lost to others because of barriers (regulations, laws, taxes, etc.) to the rapid transition of new knowledge into products and services. Examples of this occurrence include solar cells, batteries, television, and 5G communications. As the pace of transition from the laboratory to the market accelerates, the U.S. position becomes increasingly endangered (Figure 9).

Figure 9: Years from 20 Percent to 80 Percent Penetration of U.S. Homes 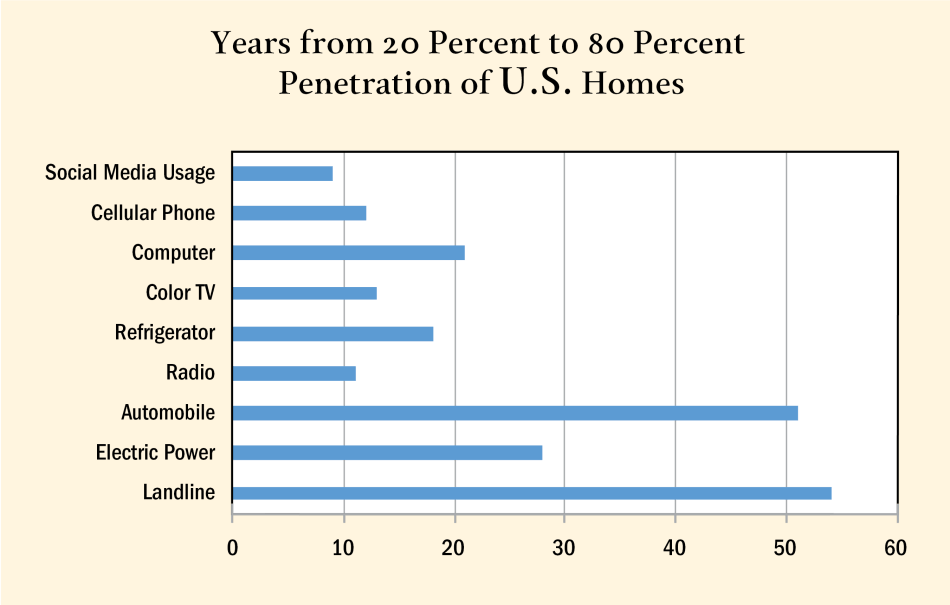 The United States, with a GDP in 2018 of approximately $20 trillion, has the largest economy in the world based on current exchange rates.34 China is the world’s second largest economy by this particular measure, and analyses pro-ject that China will close the gap with the United States by 2030.35 China passed the United States in GDP adjusted for purchasing power parity in 2014.36 China became a member of the World Trade Organization in 2001 and in a single decade, from 2008 to 2018, the number of Chinese Global Fortune 500 companies rose from 29 to 120, while the number of U.S. companies fell from 153 to 126 (Figure 10). China is on a path to pass the United States by this latter measure in the very near future, if it has not already done so. 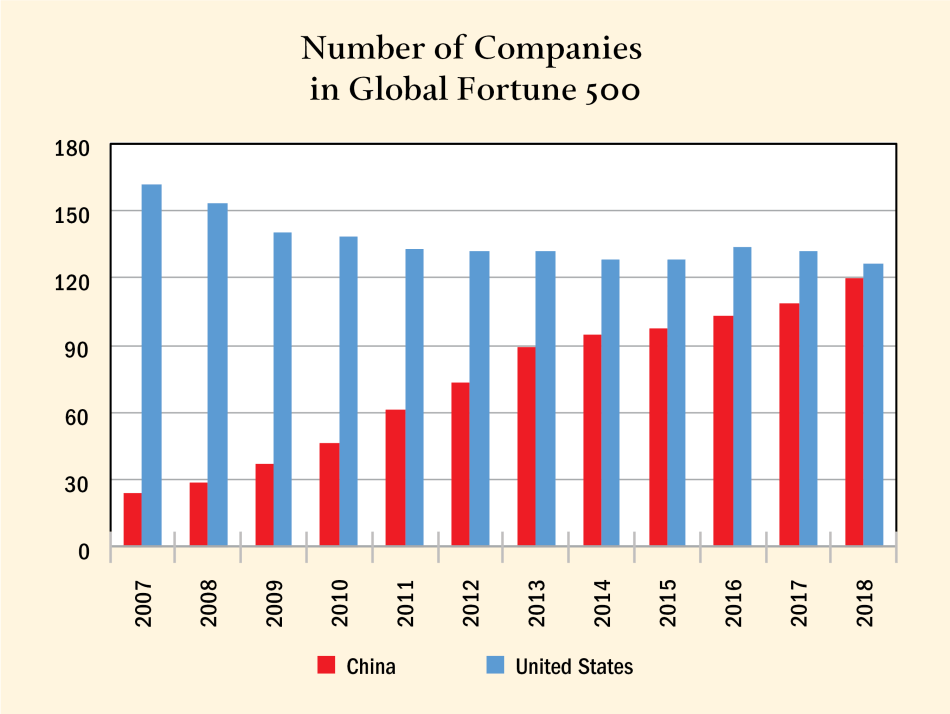 In the United States, pressures from stockholders tend to encourage publicly held companies to favor investments that promote near-term increases in stock price as opposed to long-term returns, thereby discouraging investments in such areas as infrastructure and research.37

The task of laying the groundwork needed to ensure that the United States continues to be a country of scientific discovery and innovation has thus increasingly fallen to the U.S. federal government.38 However, federal spending (annual outlays) for R&D have remained generally flat at about 4 percent of total federal spending and about 10 percent of discretionary spending for more than 30 years (Figure 11).39 With the federal government’s redefinition of development in fiscal year 2018 to exclude “pre-production development” and other nonexperimental work, these percentages have moved even lower.40

Figure 11: R&D and Nondefense R&D as a Percentage of the Federal Budget, in outlays 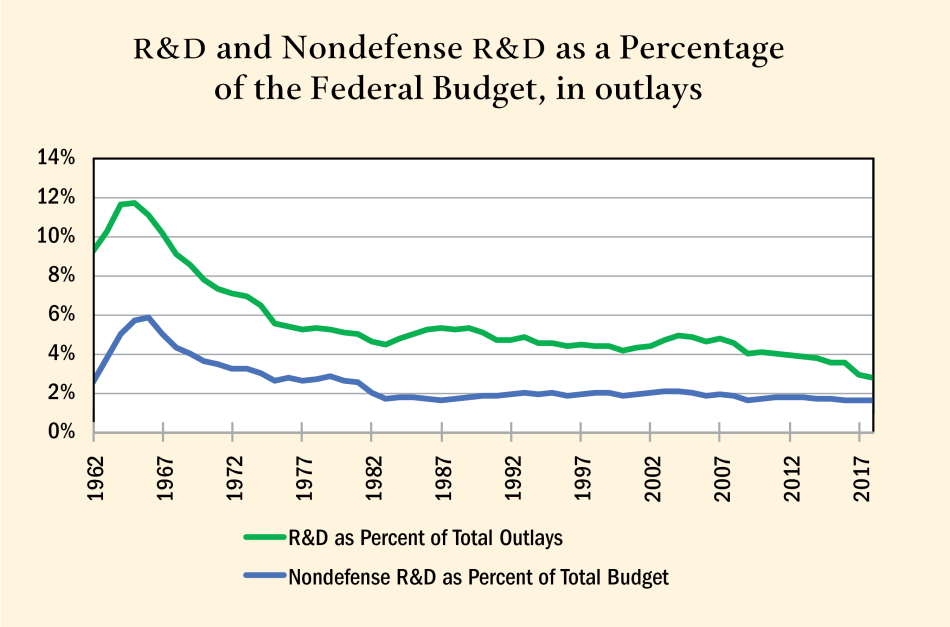 Source: American Association for the Advancement of Science, “Historical Trends in Federal R&D,” 2019.

In contrast to the United States, overall R&D spending in China has increased significantly over the past two decades. From 2000 to 2012, R&D spending as a percentage of GDP increased by 18 percent per year in China (Figure 2). China surpassed the European Union in 2015 in overall R&D investment, having allocated about $400 billion (with PPP correction) in 2015.41 As shown in Figure 1, the U.S. National Science Board has estimated that China’s spending on R&D at PPP equaled that of the United States sometime in 2018 or soon thereafter.

Project
New Models for U.S. Science and Technology Policy
Share
Previous Section
America at a Tipping Point
Next Section
A Looming Threat
Back to table of contents