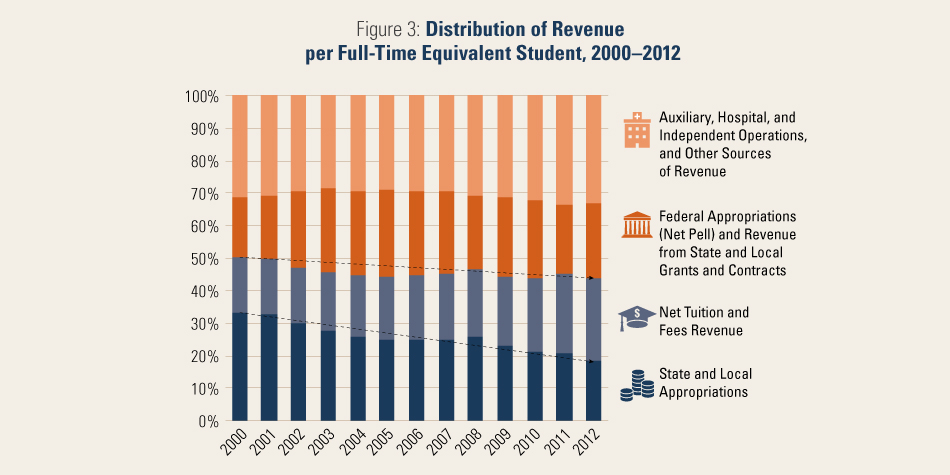 Net tuition is the published tuition minus any grants, loans, or other aid; in other words, it is the actual amount students pay to attend an institution. While auxiliary activities like housing management and food services are important components of universities, they are generally self-funding and do not contribute substantial revenue to the core operating budget of the university. Source: National Center for Education Statistics, IPEDS Analytics: Delta Cost Project Database 2000–2012, https://nces.ed.gov/ipeds/deltacostproject/.


Other Sources of Funding

As state appropriations for higher education diminish, public universities increasingly rely on other sources to advance their mission and maintain the quality of education and training they provide: tuition, philanthropy, auxiliary services, grants and contracts, and endowment and investment income. The extent to which individual public research universities rely on diverse sources of funding varies greatly by location, demographics of students served, state aid programs, and relationships with regional business and industry. Some institutions fare better than others due to generous state funding, robust philanthropic enterprises, or lucrative partnerships with local corporations.

Connecticut and Louisiana represent opposite ends of the spectrum, with public research universities distributed across the range of total educational expenses and proportions of state and student contributions. Data from 2012. Source: National Center for Education Statistics, IPEDS Analytics: Delta Cost Project Database 2000–2012, https://nces.ed.gov/ipeds/deltacostproject/.

While higher education is the “balance wheel” of state budgets, tuition is the balance wheel of public university budgets: it is one of the only unrestricted sources of funding that the institution receives.4 To compensate for the decline in state subsidies at a time of increasing enrollment, tuition and fees increased to surpass both state and federal appropriations as a source of revenue for public research universities. In fact, recent data reveal that revenues from tuition and fees now average more than one-half (and often far more) of the core education expenditures at public research universities.5

Even with the rise in tuition prices, tuition often only covers one-third to one-half of the total cost of education. While net tuition revenue (total revenue from tuition and fees minus grant and loan aid) has risen at all public research universities, only 17 percent of first-year students in AY2013–2014 paid full tuition without receiving any form of financial aid.6


Gifts and grants from nonprofit foundations and other private organizations are an important component of fundraising. In 2012, foundations awarded a total of $1.77 billion to higher education, of which $639 million went to public colleges and universities (including community colleges, comprehensive state colleges, and public research universities), with the rest going to private colleges and universities.9 However, gifts and grants from foundations often fund very specific projects and their associated project costs, and do not cover the costs of overhead, which can include administrative expenses and utilities. This often results in institutions having to provide operational support for grants received. In short, foundation support is not a substitute for state appropriations, tuition, or other unrestricted funding.

One major caveat to the use of private gifts is that they are very often restricted to particular purposes outlined by the donor (such as scholarships, buildings, or faculty chairs) and are often supplemental to preexisting gifts.10 As such, private gifts—like foundation gifts and grants—often cannot substitute for state funding. While philanthropic gifts advance the institution, it is a challenge for—and the responsibility of—public research universities to find creative ways to use philanthropy to support core operations.

Public research universities receive some revenue from auxiliary services such as housing, university presses and bookstores, and food service. (Contrary to popular belief, in very few cases do athletics revenues exceed their expenses.)11 Many of these enterprises are self-supporting, with any surplus revenue reinvested in the operation of the service. As a result, use of these funds is generally restricted.

Public research universities also receive funds from the federal, state, and local governments in the form of grants and contracts. The largest examples of these are grants for financial aid and research. As engines of research, public research universities often receive significant support from agencies like the National Science Foundation, National Institutes of Health, and Department of Defense.12 Garnering these funds is very competitive and use of these funds is highly restricted, but research funding often generates resources that help support faculty salaries and student fellowships.

Some public research universities receive revenue from investment returns on institutional cash balances and endowment income, but these are usually restricted and often minimal when compared to their private counterparts. Only a handful of public research universities benefit from endowments, such as the University of Michigan, whose annual return now surpasses state appropriations.13 Yet even when the return on investment is quite large, the dollar amount per enrolled student (a popular measure for the impact of an endowment’s return) is very low relative to smaller private universities.14 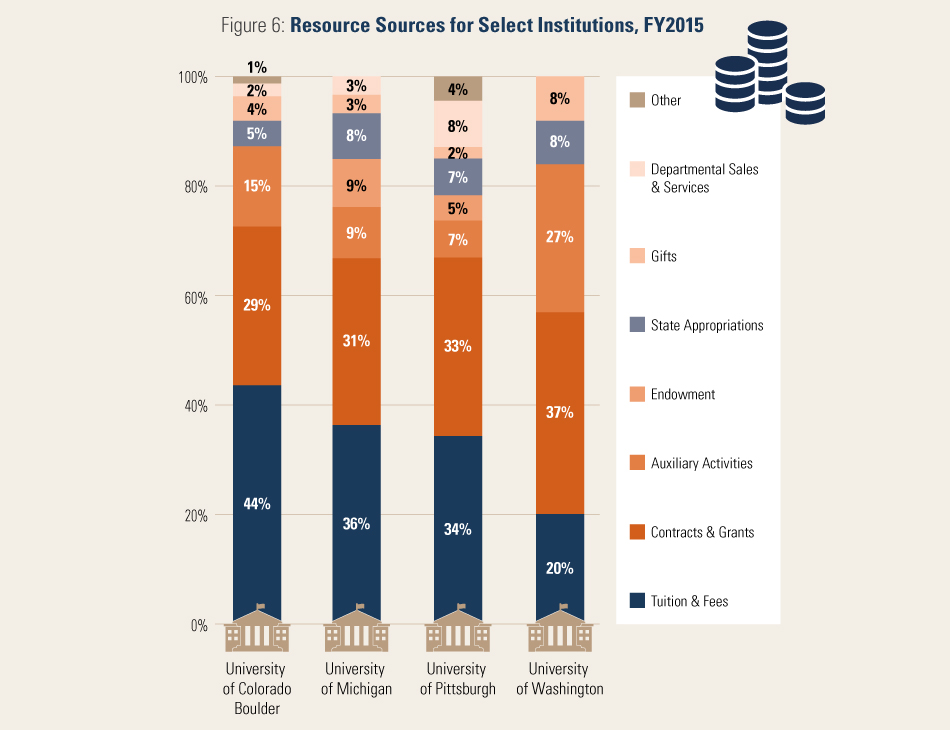 9 See the Foundation Center at http://foundationcenter.org/. Gifts recorded are $10,000 or higher and from the top one thousand foundations.

14 The College Board, “Trends in Higher Education: Endowment Assets per Student, 2012–13,” http://trends.collegeboard.org/college-pricing/figures-tables/endowment-assets-student-2012-13.

Project
The Lincoln Project: Excellence and Access in Public Higher Education
Share
Previous Section
Introduction
Next Section
Section 2: Changes in Major University Expenses over Time
Back to table of contents