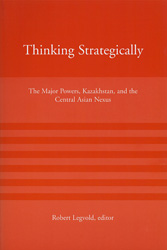 Edited by
Robert Legvold
(Cambridge: The MIT Press, 2003)
Order from the Publisher

Other Publications in the Global Security series

More than ten years after the breakup of the Soviet Union, none of the major powers, including Russia, has developed a cohesive geopolitical strategy for dealing with the countries and regions that once made up the USSR. Even after September 11 and the sudden importance of Central Asia in the struggle against global terrorism, the United States continues to deal with the region in fragmented and incomplete ways. Thinking Strategically, the first volume in a series focusing on security challenges posed by the former Soviet Union, addresses the economic, political, and security interests at stake in Kazakhstan for Russia, the United States, China, Europe, and Japan.

Kazakhstan presents an interesting case study both because of its role as a pivot point between Russia and the world beyond and because of its position in Central Asia. The contributors to this book call it variously a buffer, a meeting place, a bridge, a gateway, and a strategic arena. Because of its internal problems—which include great economic uncertainty despite vast oil wealth, a disintegrating infrastructure, and the potential for internal instability—and its geopolitical position, Kazakhstan and the region of Central Asia present a complex set of opportunities and dangers for the major powers.

The authors, who come from Russia, the United States, China, the United Kingdom, Japan, and Kazakhstan, address the security challenges posed by Kazakhstan and Central Asia from the point of view of their respective countries or regions.

This volume is edited by Robert Legvold, professor of political science at Columbia University. Funding for Thinking Strategically and other volumes in this series was provided by a generous grant from the Carnegie Corporation of New York.

“This is an important and original book on one of the least-studied regions of the world. By placing Kazakhstan in the center of ‘Inner Asia’ and then examining Great Power perspectives, it forces the reaser to think about the area in new and rather unconventional ways.”
- Coit Blacker, Senior Fellow and Deputy Director, Institute for International Studies, Stanford University

“Central Asia in general and Kazakhstan in particular is an area of the world in which the United States has very recently and precipitously become more deeply involved. Our policy in Central Asia has no benefited from much debate or contribution from experts outside of the government. This volume provides necessary thinking on the topic and is likely to generate important discussion of U.S. policy.”
- Marshall Shulman, Adlai E. Stevenson Professor of International Relations Emeritus, and Founding Director of the Harriman Institute, Columbia University.

Chapter 5
Japanese Policies in Relation to Kazakhstan: Is There a "Strategy"? (Go to publisher)
Uyama Tomohiko

Other Publications in the Global Security series

The American Academy Studies in Global Security book series is edited by Carl Kaysen (MIT), Martin Malin (American Academy), and John Steinbruner (University of Maryland), and published by The MIT Press. This volume is one of five that consider international security in the post-Soviet region.

International Security in the Post-Soviet Space