The Humanities in American Life: Insights for Art and Art History 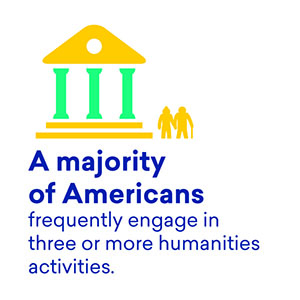 The first national survey on the humanities finds wide agreement about the personal and societal benefits of the humanities, substantial engagement with a range of humanities activities at home and in the workplace, as well as strong support for teaching most humanities subjects in the schools. The survey, conducted in fall 2019 by the American Academy of Arts & Sciences’ Humanities Indicators project, was administered to a nationally representative sample of 5,015 American adults (using NORC at the University of Chicago’s AmeriSpeak panel) with funding from the Andrew W. Mellon Foundation. All findings are estimates based on a sample that was weighted to reflect the composition of the US adult population. All cited differences between groups were found to be statistically significant at the 5% level.

The results varied substantially at the discipline level, however. The findings for art and art history in the key survey areas indicate:

These findings capture only a small slice of the larger study. Visit https://bit.ly/HumSurvey for the full report of the survey findings, including responses to questions about the humanities as a whole, visualizations comparing art to the other subjects, and a detailed summary of the responses to every question by gender, age, and other key demographics.

The findings described here are based on a sample of Americans, weighted to produce estimates for the U.S. adult population as a whole. The reported values are estimates and thus have a measure of error (also an estimate) associated with them.