Megascience projects take place at the regional, national, and international levels and are implemented with a variety of structures, depending on project goals. Table 1 summarizes these structures for large-scale science projects; some build research facilities that serve user communities exploring diverse scientific questions, others work toward answering a specific set of scientific questions, and still others organize a distributed, highly coordinated network of partners that provide measurements and data and build data infrastructures to address an agreed upon set of scientific questions. In general, international collaborations need to be supported when scientific challenges and opportunities are beyond what countries can realize on their own, and when the benefits to the partners are mutually reinforcing.36 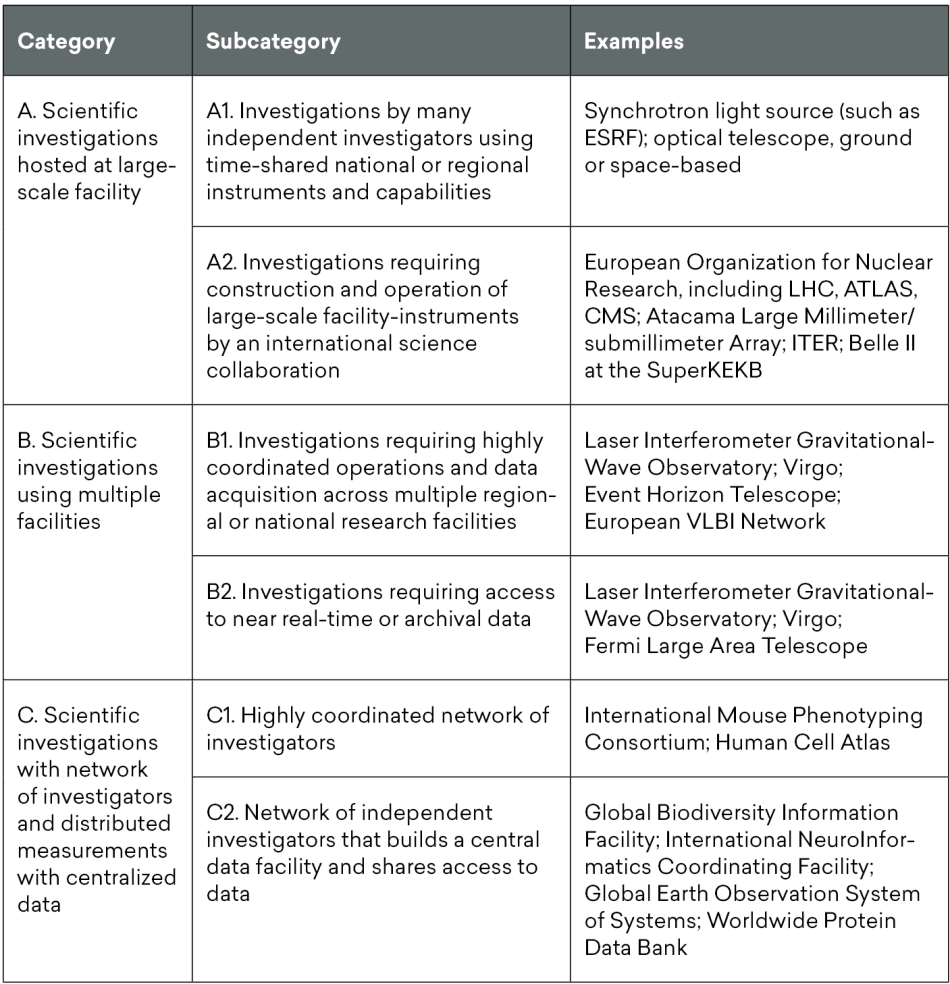 There are some large-scale science initiatives, like the National Ignition Facility, that are pursued by the United States alone, rather than in collaboration with international scientists, due to concerns related to national security. These projects may be related to weapons research and other classified scientific research ventures. National laboratories and facilities are appropriate settings for these initiatives.

For open scientific research, the United States has successfully played a variety of roles within international scientific large-scale collaborations. The United States has acted as primary funder and provided siting as well for a national large-scale research facility that involves international collaborators and collaboration with similar research facilities in other countries (see the Daniel K. Inouye Solar Telescope). The United States has also played an important leadership role within a multi­national partnership that constructed and operates a large-scale facility sited in another country (see the Atacama Large Millimeter/submillimeter Array). In cases of distributed networks of scientists without centralized facilities, or the establishment of centralized accessible data facilities, the United States may participate as a primary coordinating body and funder (see the Global Alliance for Genomics and Health and the International Mouse Phenotyping Consortium), or as a participating country member rather than serving in a leadership role (see Global Earth Observation System of Systems Platform). The specific role that the United States can or should assume in an international large-scale scientific collaboration must be discussed early in the development of the project. Consultation should be sought with the U.S. scientific community and the U.S. funding agencies and, in some cases, with the State Department. This careful consultation is one of the major factors to be considered as such projects develop (see Principles for International Large-Scale Science).There are some large-scale science initiatives, like the National Ignition Facility, which are pursued by the United States alone, rather than in collaboration with international scientists, due to concerns related to national security. These projects may be related to weapons research and other classified scientific research ventures. National laboratories and facilities are appropriate settings for these initiatives.

The Daniel K. Inouye Solar Telescope (DKIST), in Maui, Hawaii, with a 4.24-meter diameter, is the world’s largest and most powerful solar telescope. Its data center is in Boulder, Colorado.

DKIST captured its first solar images in 2019 and is projected to continue to operate through the 2060s.37 In January 2020, the telescope produced the highest-resolution image of the Sun ever taken, enabling a more detailed study of solar energy channeling.38

In addition to being located within the United States, construction of DKIST was U.S.-funded through the National Science Foundation, with an estimated total project cost of $344 million.39 Most collaborators on the telescope are American, with the exception of the Leibniz Institute for Solar Physics of Germany and international researchers affiliated with American institutions.40 The DKIST Science Policy Advisory Committee has developed guidelines for access to DKIST, observing time, and applicable data rights that follow guidelines published in 2014 by the Astronomy and Astrophysics Advisory Committee.41 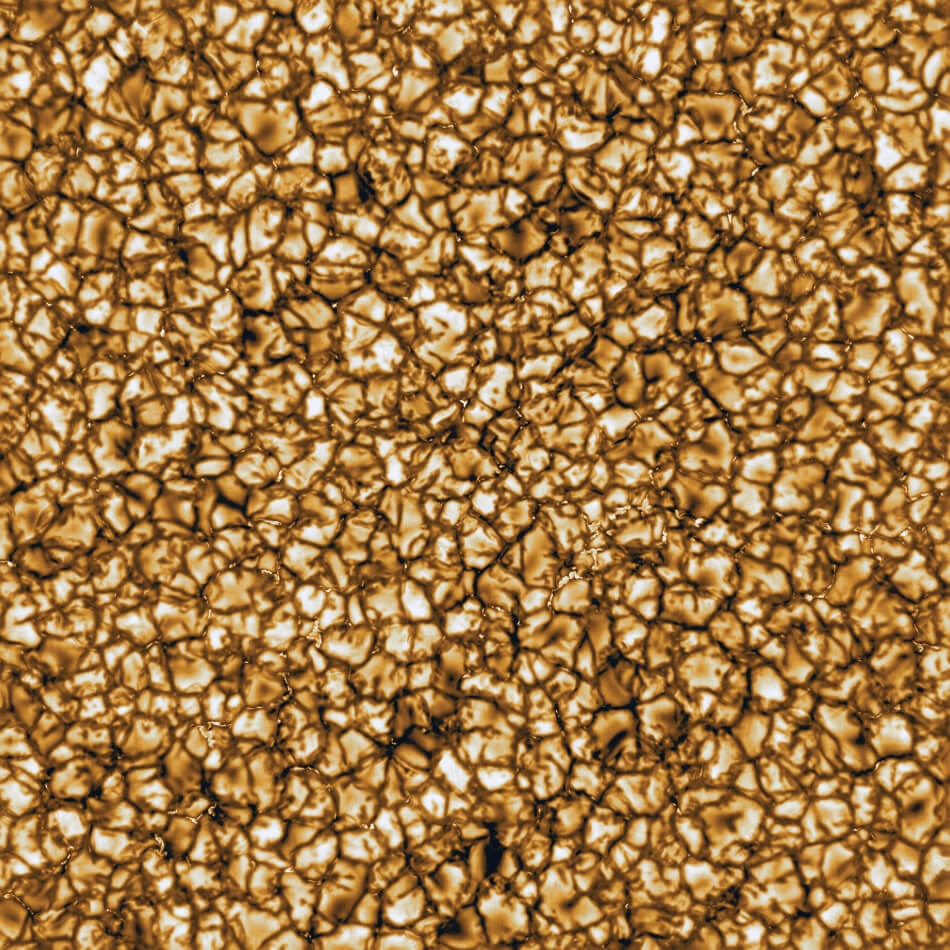 DKIST high-resolution image of the Sun’s surface, taken at 789 nanometers, displaying features as small as 30 kilometers in size for the first time. The image shows a pattern of turbulent gas that covers the entire Sun and is the signature of violent motions that transport heat from the inside of the Sun to its surface. Image by National Solar Observatory/Association of Universities for Research in Astronomy/National Science Foundation.

The Atacama Large Millimeter/submillimeter Array (ALMA) is a radio telescope array on the Chajnator Plateau in northern Chile.42 With fifty-four twelve-meter-diameter dishes available on a high, dry site, as well as much larger bandwidth and improved electronics, ALMA currently provides two orders of magnitude improved performance when compared with previous millimeter-wave arrays. This powerful telescope receives an average of 1,800 scientific proposals annually as scientists carry out observations using the array.43 In one of these studies, scientists were able to visualize a binary pair of stars in orbit around each other at a higher resolution than was previously possible, enabling them to conclude that the stars’ protoplanetary disks were misaligned, which would likely lead to planetary orbits unlike those in our own solar system.44

In another study, radio wave images allowed scientists to peer a full fifty kilometers below the clouds of Jupiter to observe the distribution of ammonia gases following an eruption.45 These observations demonstrated, for the first time, that energetic eruptions on Jupiter bring up high concentrations of ammonia gas and help to explain what causes the planet’s surface storms. 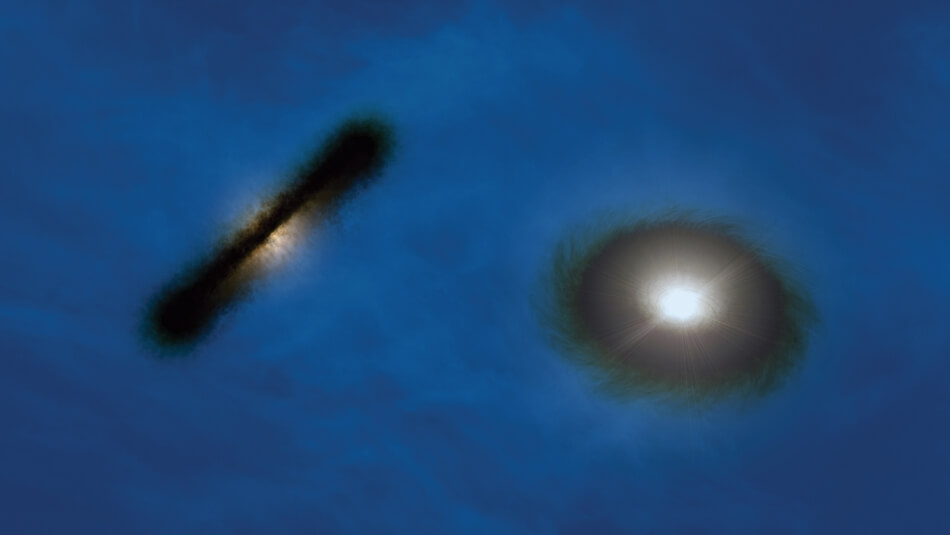 Artist rendering of highly misaligned gaseous planet-forming disks around two young stars in a binary system. This ALMA observation helps explain why so many exoplanets, unlike planets in our solar system, have highly inclined or eccentric orbits. Illustration by Robert Hurt (NASA/JPL-Caltech/IPAC).

The United States, through the NSF, plays a major leadership role in this international collaboration that built and operates the ALMA instrument, along with the European Southern Observatory and the Japanese National Institutes of Natural Sciences.46

The collaboration was developed at a time when the United States, Europe, and Japan were each independently planning to enhance their millimeter-wave astronomy facilities. It quickly became clear that international collaboration and pooled resources would extend the opportunity for scientific discovery further than any region could achieve on its own. With the selection of the Chajnantor Plateau in the Chilean Andes as the optimal site, a Chilean representative was added to the board.

Construction of the observatory started in 2004 and initial observations began in 2011, with a total shared building cost of $1.4 billion and an average annual operating cost of $100 million.47 Ongoing operations are funded by several European countries through the European Southern Observatory; by the United States, Canada, and Taiwan through the U.S. National Radio Astronomy Observatory; and by Japan, Taiwan, and South Korea through the National Astronomical Observatory of Japan.48 Each partner has established and maintains a national data center (or multiple centers) that disseminates data and supports its respective ALMA observers. 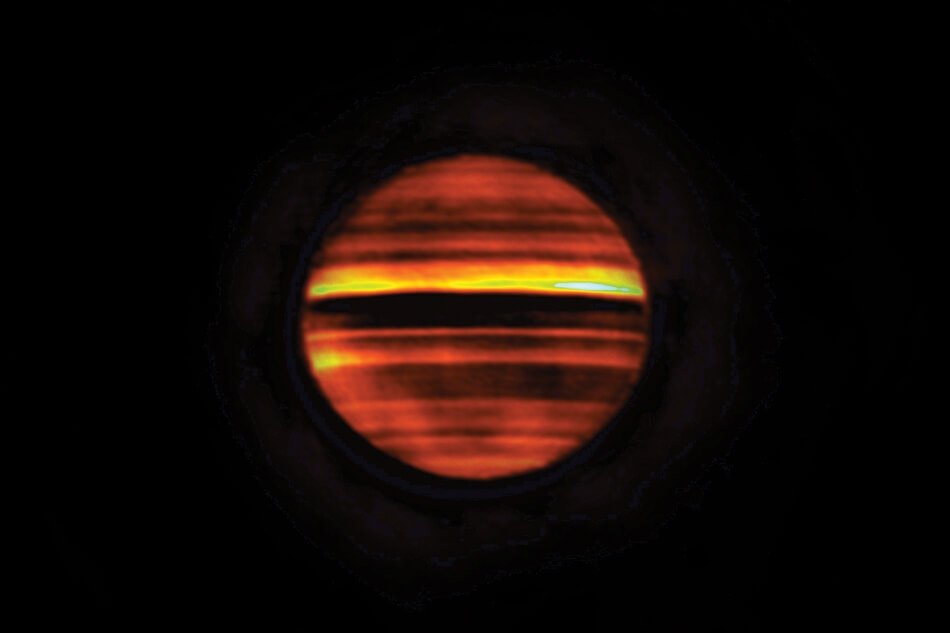 Artist rendering of highly misaligned gaseous planet-forming disks around two young stars in a binary system. This ALMA observation helps explain why so many exoplanets, unlike planets in our solar system, have highly inclined or eccentric orbits. Illustration by Robert Hurt (NASA/JPL-Caltech/IPAC).

The United States as a Major Coordinating Body and Funder for Distributed Networks: GA4GH and the IMPC

Example 1: The Global Alliance for Genomics and Health (GA4GH) was founded in 2013 to establish norms for internationally sharing genomic and clinical data. It works to enable all people to benefit from scientific advancements and to preserve “human rights of privacy, non-discrimination, and procedural fairness.”49 The GA4GH has identified core elements of a framework for responsible data sharing: transparency; accountability; data quality and security; privacy, data protection, and confidentiality; risk-benefit analysis; recognition and attribution; sustainability; education and training; and accessibility and dissemination.50

The GA4GH maintains multiple workstreams on these topics, moving toward establishing policies and guidance that will shape the fields of genomics and clinical research around the world. Meeting minutes and data toolkits are made freely available for use by the broader research community.

The United States participates in the GA4GH both as a host institution, through the Broad Institute of MIT and Harvard, and as a core funder, through the NIH. Host institutions, which also include the Wellcome Sanger Institute and the Ontario Institute for Cancer Research, provide administrative support and services, while core funders, which also include the Wellcome Trust, the Canadian International Data Sharing Initiative, and the Medical Research Council of UK Research & Innovation, provide financial support.

Example 2: The International Mouse Phenotyping Consortium (IMPC) is a coordinated international effort across nineteen research institutions in eleven countries. While the entire genomes of many species are known and published, the function of the majority of genes remains unknown. The IMPC’s mission is to identify and catalog protein-coding gene functions for all twenty thousand protein-coding mouse genes and make this information freely available to researchers.51

The IMPC coordinates coalitions working on specific subgoals, such as the Knockout Mouse Project (KOMP), which has worked to produce and phenotype five thousand knockout mice to establish resources and databases for researchers studying diseases including cancer, diabetes, and heart disease.52 Gene function is determined by systematically switching off each gene and subsequently performing physiological tests.

Many U.S. research institutions participate in the collaboration as voting members, and the NIH acts as the U.S. funder. International funding sources include the European Union’s Intrafrontier program, the Wellcome Trust, Canadian genetic research programs, and several French national bodies and university programs.53 The NIH contributed $110 million for a Phase I initiative recognizing the importance of this effort to overall disease modeling research, especially as members of the IMPC receive free access to mouse resources of lasting biological and medical value, including influencing gene selection and how they are tested, among other benefits.54

On February 16, 2005, fifty-five countries, including the United States, endorsed a ten-year plan to develop and implement the Global Earth Observation System of Systems (GEOSS) for the purpose of achieving comprehensive, coordinated, and sustained observations of the Earth system.55 GEOSS now integrates data sets of Earth observations from participating organizations in 111 countries with information and processing systems for users from both the public and private sectors.56

GEOSS facilitates access to Earth data in service of the United Nations Sustainable Development Goals (SDGs) and Office for Disaster Risk Reduction (DRR).57 It does so through an Internet portal as well as through a network of satellites for access in contexts with limited or no Internet.58 In addition to incorporating data, GEOSS continues to improve its interface to increase accessibility and generate productive results for researchers and policy-makers.59 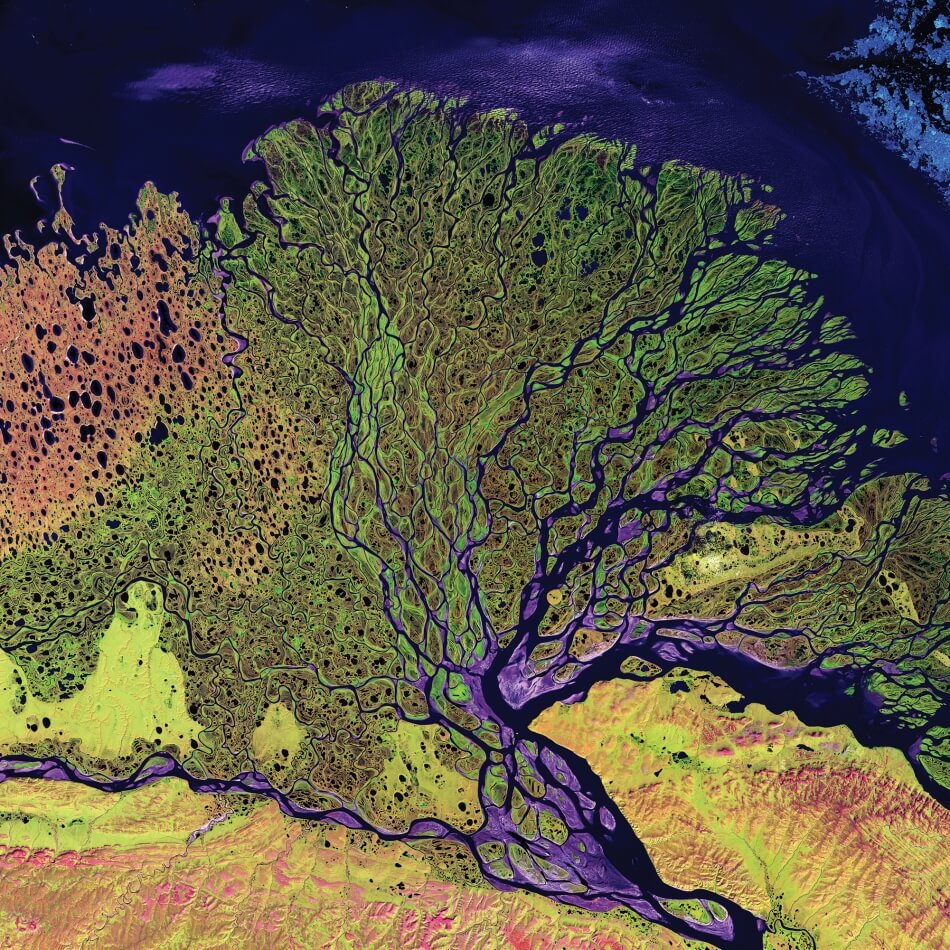 One way that the United States draws upon GEOSS data is through the U.S. Department of Agriculture Foreign Agricultural Service International Productions Assessment Branch, which monitors agricultural production world­wide in order to provide early crop yield warnings, such as in cases of drought abroad, for U.S. domestic interests.60 Doing so allows the United States to monitor food supply concerns and prepare in advance of shortages.

GEOSS is administered through the Group on Earth Observations (GEO) and has over one hundred member organizations and participating international organizations.61 The United States participates in GEOSS through the Integrated Earth Observation System (IEOS) and contributes data from all levels of government, industry, academia, and the nonprofit sector.62 Since 2016, GEO has received funding from twenty nations around the globe, including the United States, plus the European Commission, the Institute of Electrical and Electronics Engineers (IEEE), and the University Corporation for Atmospheric Research.63