At the very moment this report was being written, China1 was passing the United States in research and development (R&D) investment (at purchasing power parity, PPP) (Figure 1).2 Yet this is an era in which a vast majority of the growth in America’s economy (gross domestic product, GDP) and all that it supports is attributable to advancements in science and technology. Indeed, we live in what is not infrequently referred to as the Age of Technology. But, astonishingly, headlines in the media make no note of this watershed event, nor has the topic been raised in presidential debates. The nation seems oblivious to the consequences of what is occurring – and what will follow.

Figure 1: Gross Expenditures in R&D in billions of 2019 constant PPP $US 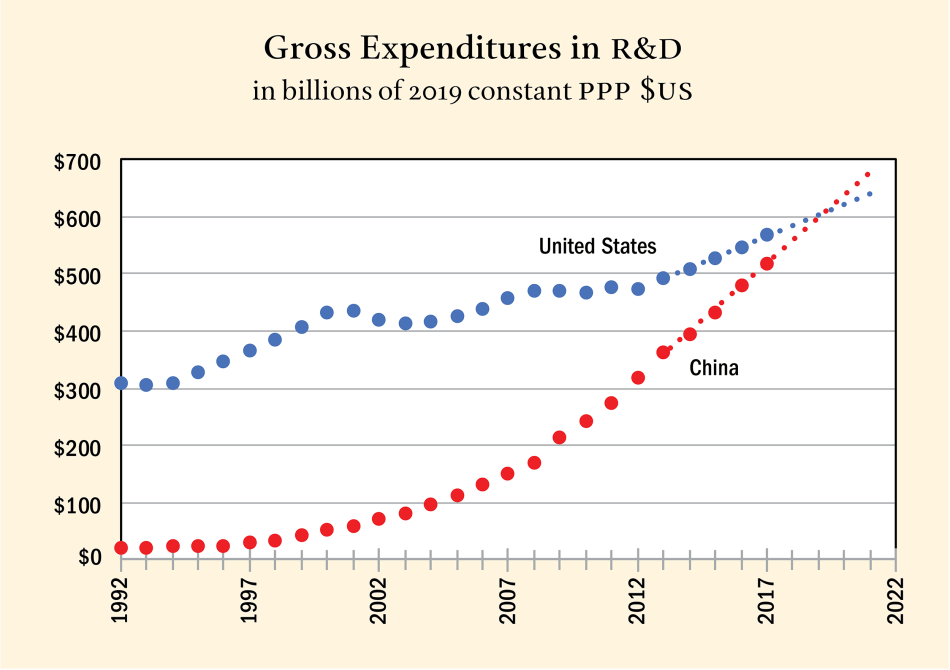 Other recent developments are placing additional stress on the U.S. research system even as they underscore its indispensability in providing the fuel for American innovation and competitiveness as well as the know-how required to address the nation’s many societal challenges. As this report was being prepared, a major coronavirus outbreak was impacting thousands of lives in China, America, and other parts of the world. Meanwhile, security concerns have led some policy-makers to propose draconian restrictions on the very same foreign researchers on whom we have come to rely to fill the persistent domestic talent gap in science and engineering. One result of recent and proposed immigration restrictions is that other countries have become more competitive at attracting workers – and U.S. corporations are more inclined to move R&D laboratories to other countries. Compounding this problem is a continued weakness in U.S. support for basic and applied research; the FY2021 Presidential Budget Request would cut federal support for these categories by $7.9 billion, or just over 9 percent.3

The global pace of scientific and technological (S&T) discovery is accelerating. Today, global leadership in science and technology is measured in months or years, not decades or centuries. For example, the time between doubling computing capacity on that critical element of virtually all modern electronic devices – the semiconductor integrated circuit – is just a small number of years.4 The half-life of articles published in scientific journals, as measured by the frequency at which they are referenced, is five years or less in many fields.5 To fall behind even a few years in S&T R&D can have grave consequences for a country’s economy, job creation, standard of living, and national security.

The United States became a world power – economically, militarily, and culturally – in significant part by placing a high priority on innovation, fueled by advances in science and technology. This priority, in turn, required investing in R&D, especially fundamental research conducted in universities and national laboratories across the fields of science, technology, engineering, medicine, and mathematics.

China is projected to become the world’s largest economy when measured by GDP by 2030.6 By 2026, the 250th anniversary of the United States, China’s strategic plan calls for it to be well on its way to becoming the unchallenged world leader in science, technology, and innovation. These developments are perilous for America, which today, 50 years after the Apollo 11 moon landing, is at a tipping point in R&D.

The well-being of America and its individual citizens depends heavily on the strength of America’s economy, which, in turn, depends heavily on research and development. Without a strong economy, jobs disappear – along with the tax receipts needed to provide healthcare, social security, education, infrastructure, and homeland and national security. Numerous studies, including two that won Robert Solow and Paul Romer the Nobel Prize in Economics in 1987 and 2018, respectively, have concluded that as much as 85 percent of the long-term growth in America’s economy (measured by GDP) is attributable to advancements in just two closely related fields: science and technology.7

Five years ago, a study committee of the American Academy of Arts and Sciences prepared the report Restoring the Foundation: The Vital Role of Research in Preserving the American Dream (referred to herein as RtF1).8 The report examined the state of American innovation policy and informed the bipartisan American Innovation and Competitiveness Act, which Congress passed by unanimous consent in December 2016 and President Barack Obama signed into law in January 2017. The Academy and other organizations worked with corporate leaders to issue a call to action, “Innovation: An American Imperative,” that was signed by more than 500 major businesses, universities, scientific societies, and other organizations.9

The present committee is guardedly encouraged by this strengthening of our national understanding of the importance of R&D and by recent increases in federal research funding in some areas, the FY2021 budget request notwithstanding. Yet the challenges within the United States, along with rising government investment by China and other countries, remain basically unchanged. This report presents a comprehensive update on America’s situation and provides policy recommendations that, if enacted, would help ensure that the United States does not lose the preeminent position in discovery and innovation that it has built through investments and efforts since the end of World War II.