Not-for-Profit Writing, Book, and Literature Organizations and Their Revenues

Organizations that support creative writing and an appreciation of books and literature support the development of key humanities skills. Organizations included in this category foster the practice of creative writing (including poetry) and the appreciation of existing literature separate from the work of libraries. Drawing on tax records extending back to the 1980s, the following indicator tracks the number and revenues of larger not-for-profit organizations of this type; that is, those with gross receipts of $50,000 or more (and thus required to submit the federal tax forms that are source of the data underlying this indicator). 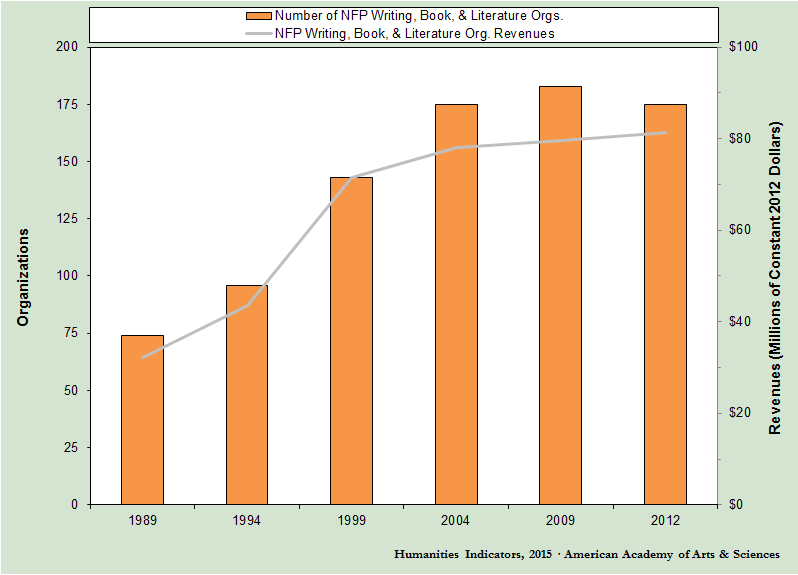 * Organizations whose gross receipts were $50,000 or more. Years are “circa” years, a concept developed by the collector of these data to compensate for the often substantial lag between the end of organizations’ fiscal year and their filing of IRS Form 990, the annual financial report required of all public charities—and the source of the data presented in this indicator. For more on circa years and the rationale for excluding organizations with gross receipts of less than $50,000, see “About the Data.”
** Number of years since recognized as “nonprofit” by the federal government.

Private foundations, in contrast, typically have a single major source of funding (usually gifts from one family or corporation rather than funding from many sources) and most have as their primary activity the making of grants to other charitable organizations and to individuals, rather than the direct operation of charitable programs” (http://www.irs.gov/Charities--Non-Profits/Charitable-Organizations/Public-Charities, accessed 5/29/2015).

The data that are the basis of the analysis presented here were culled by the Urban Institute’s National Center for Charitable Statistics (NCCS) from the IRS Form 990 Return Transaction Files. In the earlier years for which data are presented here—1989, 1994, 1999, and 2004—the IRS required that every tax-exempt public charity with typical gross receipts of $25,000 or more complete the Form 990 annually. Using the form, charities described their financial condition, activities, and key personnel. The IRS has since changed its rules with regard to which organizations must file and how much financial information they must provide. To ensure the comparability of data for earlier years with data for 2009 and 2012, the Humanities Indicators (HI) limited the updated analysis to organizations whose gross receipts were typically $50,000 or more.

In analyzing the information supplied by organizations on their Form 990s, the NCCS employs the National Taxonomy of Exempt Entities (NTEE), a widely used categorization scheme developed by NCCS to distinguish among the various kinds of organizations on the basis of their primary mission. While the NTEE includes a category for the humanities, other types of organizations that the HI consider to fall within this category, such as humanities-focused museums and libraries, are classified separately within the NTEE. In 2005, at the request of the HI’s data analysis team, the NCCS assembled information on all tax-exempt humanities organizations that fall within the HI’s purview* at five-year intervals going back as many years as the NCCS database permitted. This yielded data for a 15-year period extending from 1989 to 2004. The recent update of this indicator involved adding two data points (2009 and 2012) and also data for certain organizations that were not captured as part of the first analysis, including adult literacy organizations and heritage language schools.

The data presented here are for “circa” years, a concept developed by NCCS to compensate for the often substantial lag between the end of organizations’ fiscal year and their filing of IRS Form 990. The range of the circa year period includes fiscal periods starting in the most recent calendar year, plus the prior two calendar years.