Enlarge the House of Representatives 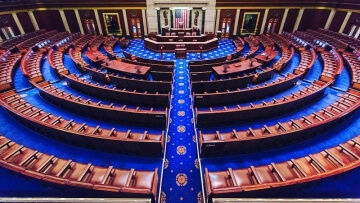 Substantially enlarge the House of Representatives through federal legislation to make it and the Electoral College more representative of the nation’s population. 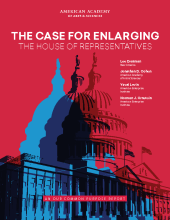 Congressional districts are too large

When the framers of the Constitution designed the House of Representatives, they envisioned it as the most purely democratic branch of the federal government. But House districts have grown so big that representatives cannot adequately connect with their massive number of constituents.

For decades, the House of Representatives grew as the nation grew, from 65 members in 1790 to 435 in 1913. Then, in 1929, Congress capped the size of the House at 435 seats. Since then, the number of constituents represented by each congressperson has expanded significantly. In 1790, each representative had roughly 35,000 constituents. Today, the average member of the House has almost 770,000 people in their district. 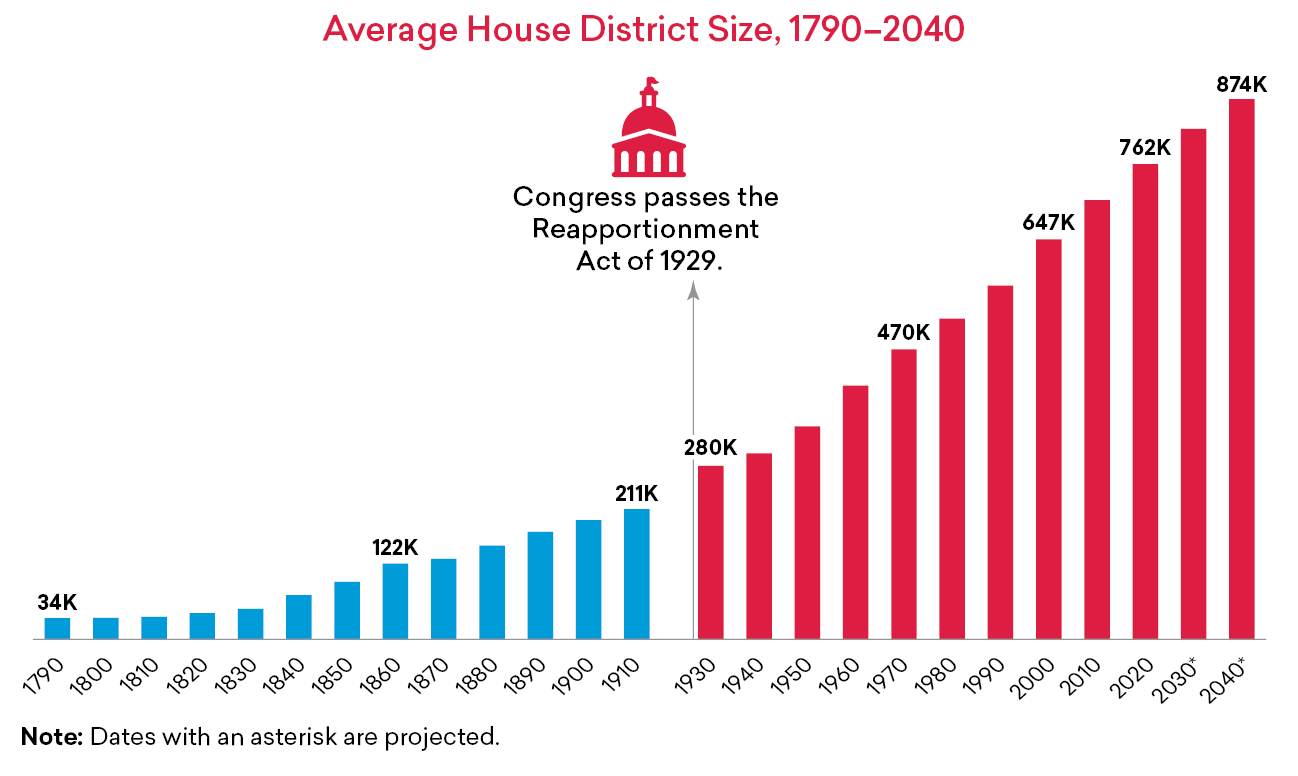 This growth has a variety of consequences. Congresspeople are meant to be the branch of the federal government closest to the people, but it is difficult for Americans to make their voices heard on the issues when they are one of just 770,000. Additionally, many Americans, including retirees, veterans, and small business owners, require regular assistance from congressional offices, which are already overwhelmed by legislative responsibilities. Many Americans feel disconnected from their representatives, and one study found that voters from smaller districts were more likely to feel their congressperson did a good job keeping in touch and were more likely to approve of their representative.

District size also has an effect on who runs for Congress. It is more expensive, on average, to run for office in a large district than a smaller one, which favors incumbents and other well-financed candidates. Adding more seats would create opportunities for a new class of candidate, which would be more likely to reflect the nation’s full demographic and ideological diversity.

Additionally, because of the large variance between the population size of different districts, some voters wield disproportionate power in the Electoral College. Enlarging the House would reduce the overrepresentation of small states in presidential election and reduce the possibility that the winner of the popular vote does not also win the election.

Realigning with the founders’ vision

Expanding the House of Representatives will bring the makeup of this body in line with the founders’ vision by making it more democratic and more responsive to voters.

Far from a radical reform, enlarging the House is something the Founders imagined would happen on a regular basis. No constitutional amendment is required – a mere vote of Congress is all that is needed to give voters a better chance to meet and interact with their representatives and to take active part in the democratic process.

Nor would the proposal significantly advantage one party over the other. The authors of The Case for Enlarging the House of Representatives ran 10,000 simulations of the 2020 election at various House sizes: and at no size did either party gain more than a 3 percent advantage in their odds of controlling the chamber. Many House sizes saw no change at all. The expansion of the House would also entail the expansion of the Electoral College. The results of presidential elections, too, would be unchanged. The outcome of the last 12 presidential elections would be the same at most feasible House sizes, the only exception being the highly contested 2000 election.

“My students and I were talking about a lot of this as the election was ramping up. By the time the course was over, for the second time in my adult life, someone was elected president who did not win the popular vote. And it was also very clear to the students immediately that … there are a number of other representative problems.”
—Farmville, Virginia
“What does that mean when you have a popular vote that doesn’t count to elect your president and that excludes a lot of communities in those states that are well populated and they don’t see who they voted for as being representative of them.”
—Los Angeles, California
Previous Next

How many seats should be added?

Our Common Purpose preliminarily suggests the addition of fifty seats but notes that a “precise number should be established through vigorous discussion and debate.” To that end, the American Academy convened a working group of scholars, thought leaders, and former elected officials and congressional staff to investigate proposals to enlarge the House. The working group debated the principles that should undergird a House expansion formula, surveyed extant proposals for House expansion, and discussed the possible outcomes of expansion.

These discussions helped inform a dedicated report: The Case for Enlarging the House of Representatives.

The Case for Enlarging the House of Representatives proposes adding 150 seats, followed by regular expansion. This plan is rooted in the principle that Americans should not regularly lose representation in Congress. Since 1931, 149 seats have been shifted between states, as states regularly lose seats, even when their population is increasing. Because adding 149 seats would result in a House with an even number of seats (making tie-breaking difficult), we recommend adding one additional seat, for a total of 585. Going forward, Congress should increase by the number of seats necessary to ensure that states only rarely lose seats, as used to be the norm. The report also explains numerous other proposals that would also entail continuous expansion and would achieve similar benefits.

In order to implement Recommendation 1.1 by 2026, the Commission proposes the following milestones to complete by year-end of:

Election Reformers Network, New America, and RepresentWomen are committed to working to implement this recommendation in order to help reinvent American democracy for the 21st century.

Election Reformers Network is nonpartisan 501c(3) founded by election specialists with backgrounds in international democracy support, election monitoring, and U.S. reform campaigns. ERN develops and advocates for tailored institutional reforms, particularly in areas of U.S. democracy that can benefit from a comparative international perspective. ERN has backed winning ballot initiatives for ranked choice voting and independent redistricting and published widely in support of reforms in areas including the electoral college and mult-member districts for Congress.

New America works towards an open, fair democratic process, with equitable opportunities for full participation, in order to restore dynamism and growth to the American economy and society.